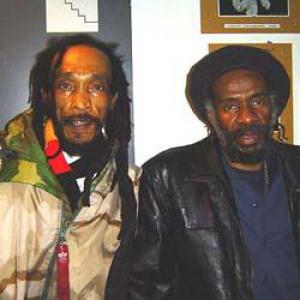 Israel Vibration still has the reputation to be one of the strongest forces in Jamaican vocal harmony style. Wiss, Skelly and Apple - the three polio victims that met when staying at the Mona rehabilitation centre - represent roots reggae at its best. Though Apple decided, for personal reasons, to leave the trio a couple of years ago, Wiss and Skelly are still keeping the torch burning. They remain regulars at the Belgian AB, stopping by at least once a year. Nonetheless their fans don't seem to suffer from overexposure as their concerts keep selling out and time after time end with an ecstatic crowd screaming for more. Wiss and Skelly are not really known as being very talkative but we managed to persuade them to do a short interview anyway:

Wiss, Skelly, let's go back in history. You guys met for the first time whilst staying at the Mona Rehabilitation Centre, that is well-known, but then you got separated again and only by accident met each other again later on. Or should we see more into that meeting?
Wiss: "I wouldn't really call it "by accident", that was supposed to take place! That's how I look upon it."

We also know the story that has been told many times, of how, after your first recordings, you guys got ripped of by Tommy Cowan. We don't need to repeat the whole story here, but my question is: What would you tell young singers and musicians that are just starting out in the music business, to prevent them from falling in the same trap?
Wiss: "I would say that if they find themselves in a position where they can do some of the work themselves, they should definitely look in that direction. If they do have to depend on someone, they should secure their part of the deal from the beginning. That's your security. Just look out and be careful!"

I don't know if it's still the case now, but there was a period when of every Israel Vibration album that was released a dub version soon followed. What was the reason for doing that?
Wiss: "Well, that's just a part of Jamaican culture you know. When you bring out a track, the riddim version is also quite appreciated."

For the longest time you've been working together with the Roots Radics now. I guess they must almost be like a second family, but don't you ever feel like touring or recording with another band?
Wiss: "In the early days we didn't work with just one set of musicians, but when we started to work with R.A.S. records, they had an agreement with the Roots Radics, so they became our recording band. It's not like we really can't work with other bands, but this really flows, so why not let it flow?"

Skelly, you used to be a very talented basketball player but got kicked of the team because of your Rastafarian belief. What feelings did that stir for you? I imagine this would have been one of the first times where you were confronted with a direct aversion to Rastafarianism.
Skelly: "Like they always say: "When one door is closed another will open!". I was planning to play basketball for Rastafari, but the Most High gave me something to do that I really even loved more: playing music with the people I love! So I don't regret it! Selassie I!"

Just recently the Prophet Gad, founder of the Twelve Tribes of Israel passed away. Did you know him personally and, if so, what kind of man was he?
Wiss: "I knew him yes. He was a man that had certain insights, who brought certain realisations to the people and from that a lot of good things sprouted. Rastafari!"