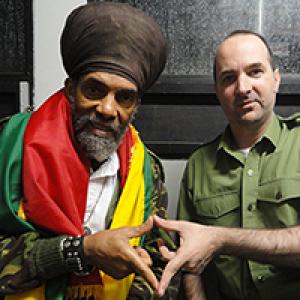 IQulah, way before you embarked on your musical path, you were a simple farmer. Is that still what you are at heart?
IQulah Rastafari: "Absolutely! I've always continued involving myself with farming, because His Imperial Majesty considered it one of our sacred duties ("Since Ethiopia's economy is predominantly agricultural, agriculture must play a large role in the plans which have been drawn up, at our command, for our empire's development, Haile Selassie on agriculture, 1958, red.). It's all about self-sustainability growing what you eat and eating what you grow ("The fruits of the farmer's labour must be enjoyed by him whose toil has produced the crop, Haile Selassie on agriculture, 1958, red.). Our body is our temple, so I consider my food to be medicine and my medicine to be food."

At a certain point you put together a soccer team and it was at that point that music also started playing a role in your life.
IQulah Rastafari: "Well, I grew up listening to music you know, because my father operated his own sound system called President, and my mother was a music teacher. So my house was always full of music. When I retreated to the mountains, I joined local grounations playing the repeater or keteh drum. Now the soccer thing was just me and a bunch of friends I used to hang around with. We all loved the game and some of us were pretty good at it, so one day I decided we should form a real team. So that's what we did and we called our team Wadada. Spending more and more time practicing with the team also slowly put an end to my life in the mountains. But the real spark the lit the musical fire in my soul was when one day I was just chanting by myself, Augustus Pablo passed by, heard me and told me: "IQulah, you have the natural ability to be a singer. You should pursue this further and use this talent to spread the message!". So I have to give thanks to the great Augustus Pablo for inspiring I&I! But I still love my soccer to, you know! Just the other day I was in Liverpool and I bought myself a football. Practicing my ball control is what keeps me in shape!"

Did you adopt the name IQulah (Integrity, Quality, Unity, Love, Africa and Home, red.) when you started your career in music, or where you already know under that name before that time?
IQulah Rastafari: "That name IQulah was given to me by a set of elders during the time I spent up in the mountains, because of my way of life. Let me give you an example… When I cooked my food, I didn't use a pot, but cooked it straight in the earth. I would dig a hole, put cocoa leaves on the bottom, my food on top, and then cover it up with leaves again and close it up with earth. It's an ancient indigenous way of cooking that was also used by the maroons, escaped slaves who couldn't afford to be discovered so couldn't build an open fire to cook on. After a while I even abandoned that and only started eating raw or uncooked food. It was a hard but honest and very pure way of life and that's still how I approach my music. I've been offered various deals over the years, but I've never accepted a single one, because I want to pave my way myself, staying true to my roots and principles. Rastafari way is the only way to forward for I&I. My music is just my way of praising the Most High, because he's the giver of life and I give thanks for life. Life is my paycheck! Sometimes I perform or record and don't get a cent from it, but give thanks still, because the message must be heard. Rastafari!"

When and how did you become involved with the Ethiopian World Federation?
IQulah Rastafari: "As a Rasta-farmer, one of the things I used to plant was rice, with which I used to supply various Rastafarian communities in Jamaica. In my family we'd developed our own strain of rice called buffalo rice, going all the way back to the 18th century! Being a Rastafarian youth, defending the principles of Haile Selassie I and coming from Saint Ann, the birthplace of Marcus Garvey, I also studied his teachings and philosophies. One of the things I found, was that in the speech he gave in Madison Square Garden in New York back in 1924 he put forward the right for black self-government, stating: "Where is the black man's government? It's time for I&I as a people to self-govern! We have to look to Ethiopia, because the king shall be crowned, and in the crowning of the king I&I shall see seven miles of Black Star Liners coming into the harbor.". Emperor Haile Selassie I and Empress Menen were crowned on the 2nd of November 1930 to show the world the perfect balance of ying and yang, male and female energy, alpha and omega. Now after the invasion of Mussolini's fascist forces Haile Selassie established the Ethiopian World Federation, so to me it seemed the most appropriate association to affiliate myself with. I joined Local Charter # 43 in Jamaica and eventually became the president of Local Chapter # 17 in Saint Ann. It's one of the ways I use to spread the message of His Imperial Majesty."

The Ethiopian World Federation also has a Local Chapter in Shashamane, Ethiopia. Did your work for the organization also lead you there?
IQulah Rastafari: "Yes man, absolutely! I travelled to Ethiopia for the organization, but also by myself. Together with a brethren I staged a concert on Meskel Square in Addis Abeba, which attracted over 80000 people! I'm also very close with Haile Selassie's grandson Prince Ermias Sahle Selassie, who is the President of the Crown Council of Ethiopia in exile, and he told me at one point: "IQulah you are our eyes and ears!". It's all part of the mission."

You were among the many Jamaicans who went out to see His Imperial Majesty in the flesh when he visited Jamaica in 1966. But you didn't see him in Kingston or Montego Bay, as most people did, but when he visited a small place called Montpelier.
IQulah Rastafari: "Yeah, as you say most people flocked to Kingston or Montego Bay to catch a glimpse, but at that time I was a bit of a rebellious youth, so my mother decided to put me up in boarding school in a place called Bickersteth, in Saint James. Now it so happened that this place was only a few miles from Montpelier, so when I heard Haile Selassie I was making a stop there on his train journey from Kingston to Montego Bay, I decided to head over there and check this mystical man out for myself. When I got there, the first person I saw was a Rasta elder called Bongo Stanno who as a friendly gesture lifted me on his shoulders, telling me: "IQulah you have to witness the Almighty today!". At one point I saw the train pulling up into the station. The police and local dignitaries put out a platform and red carpet for His Majesty to walk on and when the door of the train opened a gush of wind came out of the wagon blowing sings over and dusting everything up. Then His Majesty put his foot forward and I saw his feet weren't touching the ground! I was only a little youth at the time, so you can imagine that when I saw this it gave me a fright, so I jumped off of Bongo's shoulders and started running back to Bickersteth. On the way I ran into my mother who scolded me asking: "Boy, what happened to you?!" and I replied: "Mama, the Rasta God is a magician, walking in mid-air!". My mother replied: "Remember the ancient prophecy which tells: "Whenever you see God the whirlwind shall be at his feet (Nahum 1:3, the Lord hath his way in the whirlwind and in the storm, and the clouds are the dust of his feet, red.)!". From that moment onward I needed no further convincing. Rastafari!"

You also established the Rastafari Andahnet Centre in Saint Ann, Jamaica. What does the name stand for and what exactly is the goal of the center?
IQulah Rastafari: "Andahnet is the Amharic term for "unity". As you probably know in Jamaica Rastafari is divided in many tribes and mansions, sometimes causing conflict. The Rastafari Andahnet Centre is meant as a haven on neutral ground where the different mansions can congregate, reason and try to resolve existing conflicts. My work is about unity, I don't deal with segregation; unity regardless of class, color, creed or nationality, because Haile Selassie I might have been an African, his teachings and livity are universal."

Unity means stripping away the differences between the various mansions in Rastafari, and ending up with the core values of the movement. What are those core values for you?
IQulah Rastafari: "To me the core of Rastafarianism is to live as one. As I've already mentioned I follow the works and words of His Imperial Majesty Haile Selassie and he stated unity should be the cornerstone ("History teaches us that unity is strength, and cautions us to submerge and overcome our differences in the quest for common goals, to strive, with all our combined strength, for the path to true African brotherhood and unity.", Haile Selassie, red.). I can't understand how you can have all these differences between mansions when you're all claiming to hail His Majesty! I've been trying to tear down barriers for a while now. I recently went to South-Africa and helped the Rastafarians over there to resolve the petty differences that divided them. One truth, one livity, that's what it's all about!"