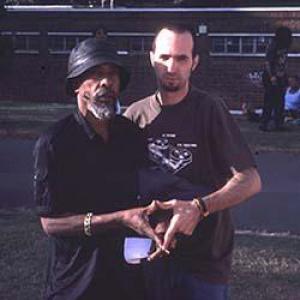 Ijahman, welcome to Belgium. You're performing at the Bob Marley Birthday Bash here in Geel tonight. I know you did an album called ‘Ijahman Sings Bob Marley' some years ago. On this 25th year after Bob's death, does playing at an event like this hold something special for you?
Ijahman Levi: "No, not really. Bob is Bob and Bob will remain Bob - Selassie I - but I am Ijahman Levi. I won't take nothing away from Bob, but I'm not here to give someone else credit. I didn't even know I was playing at a Bob Marley event here tonight. You just informed me of that. It's nice though to be a part of those festivities."

How is it to be back on tour? It has been a while since your last one.
Ijahman Levi: "Yes! It's been a while that's true. I did the odd show here and there, but this is the longest tour I've been on for quite a while - 48 dates in total - and so far it's been going fine so I'm thankful."

Is it very important to you to be able to tour with your own band?
Ijahman Levi: "Yes, very important, because that way you can work with people that have dedicated themselves to working with you for many years. I've been working together with my band for over 20 years. Some of the musicians have changed over the years of course - for example it's always hard to find a good drummer - however this time I had to take a stand. I'm promoting my new album, entitled 'Versatile Life' (Médiacom, 2006, red.), on this tour and to record it I wanted to work together with some real Jamaican musicians, roots musicians, real yard men who knew how to give the music that extra vibe. So when I recorded this album with this band, I immediately planned to tour with them afterwards because I wanted it to sound live as it did when we recorded it in the studio. The best way to assure that is to play with the same band."

In Jamaica you live in the country. You even have an album called 'Culture Country'. Is being close to nature something that is vital to you?
Ijahman Levi: "Yes it is important. First of all Kingston is too ‘hot', too bad; there's too much killing and too much crime there. In the country it's much more pleasant. When I wake up early in the morning, somewhere around 6 or 7 am, the mist reminds me of England (Ijahman spent some years in the UK, red.). My part of the country, Christiana, is beautiful. There's no badness there; everybody lives in harmony. It's very peaceful."

You're also building a studio there. Is it finished yet and what are your plans with it?
Ijahman Levi: "Well, I'll finish it as soon as I get the money from this tour! Selassie I! (laughs) A couple of weeks before I started this tour, I bought my 48 track Soundcraft and when I've finished this tour, I'll go down to London to buy a 24 track reel to reel. Then I'll fly back to Jamaica to put the finishing touches on the studio."

Are you planning to use it to promote some fresh young talent or do you have other plans with it for the future?
Ijahman Levi: "Sometimes it's hard to talk about the future. Of course when you have a studio there will always be people there who want to use it to play and record, but at this moment I'm just building it with myself in mind. Not to be selfish, but to be independent. With the name that I've built as Ijahman, people will always be interested to see what I'm doing, so if I stumble upon an individual with a good spirit and understanding, maybe we can work together. Right now though, I'm building it for myself, so that whenever I feel like it, I can go in there and play my music. Getting it built has cost me a lot of sacrifices over the years."

Very early in your career, right after the release of your two first albums on Island records, you established your own label Tree Roots. Is that independence very important to you as a musician?
Ijahman Levi: "Oh yes, very important! When I departed from Island, I had to take care of business myself. So even if I didn't know anything about it, I decided to create this Tree Roots-label around me. I just went ahead thinking that if I could sing and write my own songs and put them on that label, one day it would be established. Today I've realised more than 30 albums on it, so I guess I've succeeded. I have to admit though, that on an international level, marketing- and distribution-wise, it's not set up properly yet. However, I'm thankful because everything I've recorded from the day I started singing, I now own. Even the two albums that were held by Island records now have been released back to me. I've only been told this myself a couple of weeks ago. I've got nothing to hide, so I'll tell you plainly: I'm suing Island records at the moment for 25 years of royalties they never paid me. Rastafari! Hopefully with the help of Jah, my lawyer will win that case and I will finally get what is mine. Having said that, I‘ve recorded about 30 albums, so I've got a lot to give thanks and praise for too."

A lot of those albums are very hard to get these days. On the one hand that makes them prized collector's items for the true reggae fanatic, but on the other hand publicity-wise it might be better for you as an artist if these albums were more readily available to your fans.
Ijahman Levi: "Yeah, I like what you are saying there! Good statement! I have to show that I'm in control. The problem was the pirates. Mélodie (Mélodie distribution, French record company, red.) pirated 29 of my albums and Next! Music pirated another 15. The last few years I've been going after them and every time I caught up with one of them they filed for bankruptcy! Selassie I! I now have a lawyer called André Bertram. He is a man that really looks after the welfare of the artists he represents. I met him because of my situation with Island records. The problem is that the music business is such a small world. I've left Island records a long time ago, but I'm still regularly announced as ‘Island recording artist'! I have to carry that heavy load but at the same time I'm thankful for it because I'm still here to represent reggae music. I give thanks and praise to Jah Rastafari for long life and I hope I will live for many more years to come. Money is important, because if you want to have a good life you will need it, but it's not all down to money; your soul is important too! Selassie I! I try to maintain that standard, but to be able to do that, you have to be independent and do your own thing. Every man will be paid according to his works! You will be paid because you came to interview me here today and I'll get paid when the interview gets published; not with money, but we'll still get paid! We are here to make the people happy and that is very important in these times. There is too much sadness and depression out there. I give thanks and praise that the good Lord put the spirit in me to make music."

You stem from the tribe of Levi, the tribe that traditionally provided the priests in the Old Testament. Did you regard that as an extra responsibility you carried?
Ijahman Levi: "Yes I did. When you don't know about it, it's not a problem, but when you find out, it becomes your responsibility. I'm a Levi, born in the month of June, so I'm a Gemini. It took me 15 years to complete my Bible. Three times I read a chapter a day. Well, nobody's perfect so some days I forgot (laughs), but doing that made me know who I am. I went into prison as Trevor Sutherland and came out as Ijahman Levi. I try to do all the good I can for the people I know. I'm not Christ, so I can't give them the world - Selassie I - but there are people out there who need food and who need help. I love how the spirit controls me. Over the years my writing and singing has perfected itself and now I'm known as a spiritual reggae artist and I'm comfortable with that. Rastafari!"