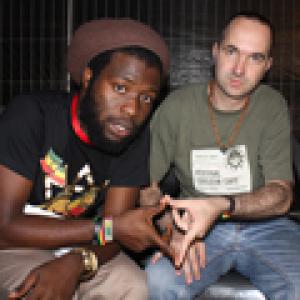 Iba, since you're still introducing yourself to most European reggae lovers, I guess we should start out by explaining your stage name. I know Iba is an African name meaning "humble", but please tell us a bit more about the MaHr part.
Iba MaHr: "It's basically an acronym with the first two letters standing for my birth name Mario and the last two Harar, the city in Ethiopia and the birthplace of Haile Selassie I."

You spent most of your youth in a place called Linstead in Jamaica. Some people might know that town from the well-known song 'Linstead Market' (the earliest found publication of this Jamaican folk song occurs in Walter Jekyll's 1907 book, 'Jamaican Song And Story', red.).
Iba MaHr: "I was born in Linstead, but spent most of my childhood in the Cheesefield district, which is a smaller community on the outskirts of the city. It was only when I started attending high school that I moved to Linstead to live with my mother. As the song states Linstead is a market town located in the parish of St. Catherine not too far removed from Spanish Town."

At one point you were doing a bachelor degree in computing and management. Why did you turn your life around to dedicate yourself to music?
Iba MaHr: "Well, financially my studies were a big strain on my mother, so I had to make the though choice wither I wanted to persevere with my studies, but by doing so deprive my younger siblings from going to high school. As you can gather I decided to quit my studies and pretty soon after music got a hold of me. I was lucky enough to be able to link up with people like Max Romeo and Fatis Burrell pretty quickly."

You're mentioning Max Romeo there. How did you end up recording 'Had It & Lost It', your first recording, on his Charmax label?
Iba MaHr: "Max and myself we're almost next-door neighbors. He lives in Treadwell district and I live in Cheesefield. I just got a call from a brethren one day telling me Max was recording upcoming artist in his studio, so I immediately went up there and eventually ended up recording 'Had It & Lost It'. Jallanzo the guitarist for Dubtonic Kru was working there as an engineer that day and he immediately told me I had a hit song in my hands and he predicted music to become my career. I never forgot his comments and I can't say he was wrong! (laughs)"

How do you remember Fatis Burrell, for whom you recorded 'Where You Are', your second single?
Iba MaHr: "Musically speaking he was the perfect mentor. He'd just walk up to you, hug you and tell you something along the lines of: "I think you should try it this way as this is what the people like!". After he passed away his son (Kareem, red.) stepped up, we became friends and we're still working together to this day."

You've got a number of hits to your name now, but your fans are still waiting for that first Iba MaHr album. When can we expect that and who are you working with?
Iba MaHr: "I'm mostly working with Roland McDermot and Jermain Edwards from Rollins Records and most of the tracks we've already recorded were voiced at Tuff Gong. I'm not completely sure yet, but since we've called this tour 'Let Jah Lead The Way', I might use that for the title of my upcoming album as well. If everything goes to plan, it should see the light somewhere later this year."

How did your family react when you first started dreading up and outing yourself as a Rastafarian?
Iba MaHr: "Not so well to be honest. Unfortunately unless you are born in a Rastafarian family it's still frowned upon most times. I'm from a traditional Christian family and they regarded me finding Rastafari as more or less a slap in the face. The more I held onto my music and the message of Haile Selassie I and Marcus Garvey, the more I was able to persuade them that what I was doing wasn't a bad thing. His Majesty once stated religion should be a personal thing ("…no one should question the faith of others, for no human being can be a judge of the ways of God.", Haile Selassie I,red.) and that is also how I approach religion; wither you are Christian, Muslim or Buddhist should remain a personal choice and not reflect on who you are as a person. Rastafari has done so much for me it would be very ungrateful not to express my thanks! I've always tried staying close to the root of the movement, so I feel most comfortable among the nyahbinghi."

With that reference to Harar in your stage name is it an aspiration of yours one day to be able to travel to Ethiopia and perhaps even perform there?
Iba MaHr: "As a black man I have a longing for the African continent as a whole, but as a Rastafarian youth there is of course a slight preference for Ethiopia because of the connection that country holds with His Imperial Majesty. I'm definitely looking forward to go there one day!"