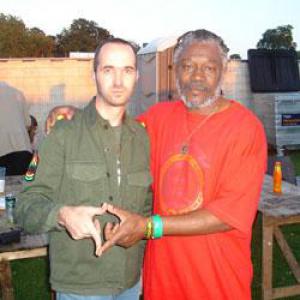 Blessings Sleepy, nice to finally catch up with you! I've been chasing you all the way from Brussels to London!
Horace 'Sleepy' Andy: "Yes, they told me! (laughs) Well, the time is here now."

You've been touring extensively this summer, really playing all over the place.
Horace Andy: "Yeah man, but I just love it!"

Your last album, 'Livin' It Up', was released with an extra DVD added, featuring the recording process of the album at the famous Harry J studios in Jamaica. Who came up with that idea?
Horace Andy: "Guillaume (Bougard, producer and former CEO of the French Tabou1 label, red.) from France."

Great idea to show the whole recording process for once; that's not something the fans get to see often.
Horace Andy: "Right and furthermore there is little footage of me available."

Is it important for you to be able to record an album in Jamaica, or doesn't that really matter?
Horace Andy: "Well, not really, but then again the vibes are different in Jamaica. I think there's a certain spiritual vibe there. I don't know where it comes from, but it's definitely there. Maybe it's the Father?"

Throughout the course of your career you've worked with just about every known producer around, did any of them leave a more permanent mark in your memory?
Horace Andy: "Each and every one of them had a different idea and I went along with everything. Bunny Lee was a very special guy; he had the ear as we say. Dodd was the number one man, but Bunny Lee was number two... well, we said: "One, three, Striker Lee!" (laughs) And then you had Phill Pratt. He taught me to play the guitar and sing. I really give thanks to those people who opened the way for me in the beginning. The payment was small though. I used to get two cents a copy and I only got twenty-five Jamaican dollars when I did my first show! Today it's much better for the youths, but I'm not jealous. I just give thanks."

A lot of artists from your generation are still fighting battles in court trying to get back the rights to their songs or royalties they never received. Is that something you're faced with as well?
Horace Andy: "No man, not really. More recently, I registered all my songs and performing rights. When you have a good publisher, like BMG, where I ended up after my work with Massive Attack, they handle all publishing. They are really good people to work with and I have to give thanks. The Father really opened a little door for me there."

You just mentioned Massive Attack. In the nineties, when you hooked up with them, they introduced you to a whole new audience, but today you are still often introduced as "The Singer of Massive Attack". How do you feel about that?
Horace Andy: "I don't know where they get this, but sometimes you have to go along with what the people say. They call me "The Voice of Massive Attack", but I think they should say "The Voice of Studio 1". I hope the people will do that someday!"

Your real name is Horace Hinds and your cousin was Justin Hinds. He was already famous when you started out, so why didn't you stick with the Hinds name too?
Horace Andy: "It wasn't really me. Horace Hinds never really hit. Mr. Dodd suggested to me one day: "Why don't you call yourself Horace Andy, like Bob Andy?" and that's what happened. It worked too; Mr. Dodd was very ingenious in that way!"

Horace, I want to thank you for taking the time out to do this and please keep coming around because we enjoy your music every time!
Horace Andy: "Yeah man, no problem. You're alright you know. I'm really doing this straight from the heart because as you say you've been following me so far! (laughs) It's a blessing to know you got me this time and I hope you keep doing your work and get better and better until the day you work for the New York Times! (laughs)"