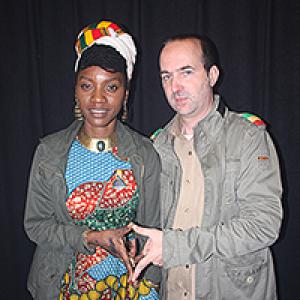 Hempress, you're the daughter of the great Albert 'Ilawi' Malawi, drummer, selector…
Hempress Sativa: "…and a producer and a songwriter!"

I think I can quote you having stated you consider him to be the greatest selector in the world.
Hempress Sativa: "Absolutely and I say that without compromise, hesitation or being bias because I happen to be his daughter. It wasn't even me who said it first, because from the words of the great Brigadier (Jerry, red.): "Ilawi drop from the sky and he caught him before he touched the ground!". Everyone can attest to the works of Ilawi, so many people have been influenced by his great selections. I can't but give ises to my daddy Ilawi!"

You were raised in the Twelve Tribes movement. What does that movement represent to you?
Hempress Sativa: "Twelve Tribes is my livity! First and foremost it means that I'm a servant of His Imperial Majesty. Every day when I wake up the first thing I do is give ises to the king. We try to live an upright live, studying his words and following the teachings of Haile Selassie I. So basically, Twelve Tribes just means daily life for me!"

That being said, would you feel just as much at home in one of the other houses/branches?
Hempress Sativa: "Of course, as long as you give thanks and praises to His Imperial Majesty, I will consider you as a brother or a sister. We're all one! It's about what's inside, not what's outside, which matters."

Twelve Tribes is also where a lot of your musical influences came from.
Hempress Sativa: "Definitely, of course there was Brigadier Jerry, but also Sista Carol, whom I consider to be one of my true mentors as she's always provided me with guidance and goodly words. I've been listening to her music for as long as I can remember. I remember sitting on the lawn of the Twelve Tribes compound eating asham and watching my father select and watching all these people MC."

Your stage name is a double reference to ganja or marihuana.
Hempress Sativa: "Well, I felt that as a Rastafarian woman I needed a name that would express who I was and what I was about without you even having to meet me first. Fact is that I'm an avid advocate for marihuana, so I definitely wanted to include that. I feel the name perfectly reflects who I am and what I stand for."

With the title of your debut album, 'Unconquerebel', you made a play on words.
Hempress Sativa: "As Rastafarians we go against the system and whenever you do that you need to be rebellious. With that title I wanted the people to know that I&I stand firm in our countenance and our spirit won't be broken easily."

If there's one killer tune on the album, it's without any doubt 'Boom (Wah Da Da Deng)Boom', which you recorded in collaboration with Italian producer Paolo Baldini. Meanwhile you've also collaborated with Mellow Mood already, so tell us how that whole Italian connection was established.
Hempress Sativa: "Well Jamaica continues to be the Mecca of reggae music, sooner or later everyone who's involved with the music wants to touch base. I was first contacted by Mellow Mood to do a combination, so I decided to check out their music to see what they were all about, because for me it's very important to work with likeminded artists. I liked their style and when they sent me the song they wanted me to voice, being 'Inna Jamaica Pt. 2', I immediately felt the vibes. From there Paolo Baldini, who later provided me with the instrumental part of what would become 'Boom (Wah Da Da Deng)', came into the picture. The vocals of that song are really me freestyling over the riddim."

In the beginning of your career you were part of the Jah Ova Evil or J.O.E. movement.
Hempress Sativa: "Jah Ova Evil was basically the first place that gave me the opportunity to record my music exactly the way I wanted to record it. I give thanks to Selah (Jahnoi 'Selah' Nunes, red.), to Lil Joe (Alty Nunes, red.), who passed away, because they were there for I&I when no one else would give me the light of day."

There's only one combination on the album and for that song, 'Natty Dread', you opted to collaborate with veteran deejay Ranking Joe.
Hempress Sativa: "Because of my dad I've always listened to old-school music, so to me the choice to work with Ranking Joe was a natural thing. I kind of know him on a personal level, so I just reached out and he was more than happy to do it. I'm really grateful for the support he's given me."

This is your first time in Europe, is Africa on the horizon as well?
Hempress Sativa: "I haven't been yet, but I'm longing to go. It feels like the home I've never seen yet. Repatriation is a must, so I'm sure I'll eventually get there, even if it's not to perform."