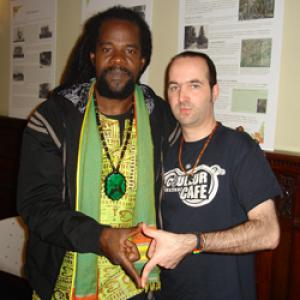 Harry, is this your first time in Europe?
Harry Mo: "As a musician it is, but I was already stationed in Europe, in Germany, when I was still with the US military back in the nineteen nineties."

You're from a little island in the Caribbean called Dominica; tell us a bit more about that place.
Harry Mo: "Dominica is often referred to as the nature island in the Caribbean and is situated between Guadeloupe and Martinique. These two islands were originally under French rule, so that's why we speak French Creole on Dominica. It's also one of the few islands left in the Caribbean that still has some tropical rainforest left and it's also one of the few islands where the original inhabitants managed to survive the colonization era. The native indians called the island Wai'ti Kubuli, which means "tall is her body". We're not really known for our fabulous beaches, but we have quite a few fresh water lakes and beautiful waterfalls. I'm from a little place in the east of the island called Mont Jaune, which was known as a hiding place for runaway slaves (the reason why Harry called his record label Yellow Hill Music, red.)."

As you mentioned at the beginning of the interview, you were in the military for a while.
Harry Mo: "When I was still in Dominica, I was employed as a school teacher for about five years, but when I obtained my US visa, I decided to migrate to the US Virgin Islands. There I joined the army. When you join the Army in the US, they will also take care of possible college fees and since I wanted to get a degree in electronics it seemed like a good idea. It was also when I was still serving in the military that I got turned onto reggae music by a Jamaican brethren who was also in my regiment and was also a deejay. I really grew up on zouk and calypso, but once the reggae bug bit me there was no turning back."

What's the link between yourself and Tuff Lion?
Harry Mo: "Tuff Lion is a very good brethren of mine. Although he's from Virginia, Lion has always been very supportive of the Virgin Islands' reggae scene. It's also because he promoted my music when he was over here a couple of years ago that I'm here today, so nuff love and respect to him for that. He also played the guitar on my album 'Back To Africa'. He's a multi-talented but very humble individual, one of the good Rastafari soldiers out there!"

In your view, what's the difference between the reggae being produced in Jamaica these days and the one coming from the Virgin Islands?
Harry Mo: "It's all reggae music and Jamaica is where the root is, but the tempo of the Virgin Islands reggae is slightly different. My own music is more influenced by people like Jimmy Cliff and Peter Tosh; so maybe I'm not the best example. I think for example I Grade, which is one of the most important record labels on the Virgin Islands, has definitely developed a sound of its own. Virgin Island reggae goes back to the slower root of the music, but it's all righteous Rasta music, you know."

To record your music, do you work with a band or different musicians or do you play most of the instruments yourself?
Harry Mo: "For this album I brought in a drummer and a bass player and then there was an extra keyboard player and Tuff Lion on guitar of course, but most of the instruments I play myself as well. I just know that sometimes it's better to get a musician who's really prolific at his instrument, so the music sounds the way it should. I don't have my own studio just yet, because I'm not pursuing music as a full-time career as yet. I also have a day job as an IT consultant."

Your most recent album is called 'Back To Africa', that slogan has been in reggae music and Rastafarian philosophy from the very start. What's your view on that topic as a modern Rastafarian?
Harry Mo: "I have played in Africa, but not as a solo artist yet. I went to Ethiopia in 2003 and we (the American band Boom Shaka, red.) played a concert in Meskel Square (Addis Abeba, red.) in front of a crowd of fifteen thousand people; awesome experience! For me, Africa is the place where everything started and where it's all going to end. We will all end up in Africa in one way or the other, whether physically or spiritually. Personally I would like to try it the physical way and find a way I can build a life there. Africa still has a lot of room for development and we all know there's more than enough work to be done. I really feel people in the African Diaspora should try to visit the motherland at least once in their life. After all it's the place where creation started!"