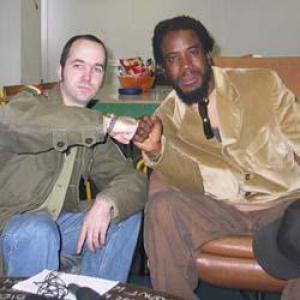 Half Pint, you're name is a reflection on your somewhat small stature. Who gave it to you and did it never sound too negative to you to carry as a stage name?
Half Pint: "No, I never saw it as a negative name. I grew up with it because I got it when I was about 4 or 5 years old from a man called Mister Brown. He was living in Kingston 11, Olympic Gardens - now they call it Waterhouse - and my mother and his daughter were friends. My mother used to take me over to their house sometimes. Now in Jamaica at that time, a name like 'Half Pint' would reflect on someone small in stature but bright in intelligence. That is why I never saw it as negative. When I recorded my first tune 'Winsome', I told my producer to use my real name (Lindon Roberts, red.), but he persuaded me to use Half Pint instead. From that time I saw the name as saying: "Yeah, I might be small in size, but I'm very lyrically potent!""

You started out singing in your school choir, but at what stage in your life did you start thinking about making it your profession and how did you go about achieving that?
Half Pint: "As you say, I started singing in the school choir, but also at church because my grandmother was a devout Christian. She made me go to Sunday school and do choir practise in church. Of course I listened to the radio too. Apparently I had a very good ear and the ability to copy a song I heard. Now when the people in my neighbourhood heard me sing like that, they would often tend to stop and listen. In school they used to call upon me to sing carols at Christmas and so on. Even though I eventually became an electrical welder at the age of 15 or 16, I never stopped singing. I had started to perform for various soundsystems in the dancehall circuit and got noticed by producers Erroll Marshall, Myron Lewis and Lloyd 'King Jammy' James. They then continued to produce my first hits with songs like 'Mr. Landlord', 'Pouchie Lou' and 'Winsome'. I continued on as an electrical welder, but when those songs eventually started to hit it off, I realised I had to take it more serious. From about 1983 I've been at it."

How did you actually meet up with Prince/King Jammy? You were one of the first artists he ever produced, no?
Half Pint: "Prince Jammy had just returned from Canada, where he was living, and had already produced albums with Johnny Osbourne and Black Uhuru. I guess I was the third artist he worked with. My songs came as much at the right time for him as they did for me, because the Osbourne and Black Uhuru recordings he did hadn't brought him much renown as yet. Around 1984 he produced a set of songs for me; tunes like 'Mr. Monument Skank', 'Pouchie Lou' and 'Mr. Landlord', that already were very popular before I recorded them because I sang them in the dancehall."

Who were your role models as a singer?
Half Pint: "Originally, when I was a little boy of only 4 or 5 years old, my mom used to take me to the Salvation Army Band parades. The parade passed right by Joe Gibbs' and Randy's record stores, so every time we went I could hear the latest tunes coming from inside, tunes from people like Ken Boothe, John Holt, The Paragons, Alton Ellis, Marcia Griffiths, Phyllis Dillon, Dennis Brown and on and on."

You're performing here at Petrol tonight with Killamanjaro soundsystem. You already worked with them way back. How did you hook up with them originally?
Half Pint: "Like other big soundsystems in Jamaica in the early eighties - like King Jammy's or Black Scorpio - Killamanjaro would play the dancehalls. I would take the microphone from time to time and that's really how it started."

As a singer and dancehall artist from the eighties, do you consider yourself more as being a soundsystem artist or do you prefer playing with a live band?
Half Pint: "I really prefer to work with a live band because in my experience, musically, working with a live band gives you more flexibility as a singer. A record can give you only so much, it lacks the dynamics a band can offer. I still highly regard the soundsystems though, because it was there that I started."

In the early eighties you were considered to be a dancehall artist. In the mean time music has changed a lot. How do you look upon this rougher, more explicit form of dancehall music that rules today?
Half Pint: "(laughs) Well, the music today might be a little faster and the lyrical content more hardcore, but it's still only lyrics and music so the basics are still the same. It's the younger generation that determines the future and the way music evolves; so if they like it a little faster that's the way it is. Not everything that is said or sung in the dancehall is to be taken serious. They are the present and we were the past, that's just how it is. Also, they take a lot of older material and modify it to their taste. If they are honest and check the things they are doing, I think they would realize they are taking things too far sometimes."

Your song 'Winsome' was covered by The Rolling Stones at one point. How did they stumble on your song? Did you know them?
Half Pint: "I was in Jamaica at that time and got a call from a member of Jimmy Cliff's band, called Sidney Wolf. Jimmy was touring with The Rolling Stones at that time and The Stones were doing a lot of cover versions of reggae songs. Keith Richards used to spend a lot of time in Jamaica at that time. There he heard the song and decided to cover it. A couple of months later Sonic Sounds got a call from their lawyers and things were set up. I never met them in person though (laughs)."