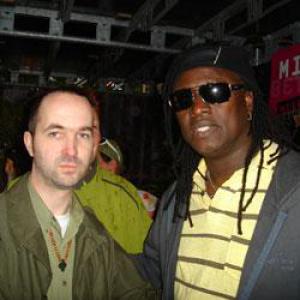 Out of all West-African musicians, Habib Koite is without a doubt the Belgian public's favourite. Year after year, his concerts keep selling out and he's a regular guest at several of the summer festivals. Habib himself often describes Belgium as his second home and that's all the incentive we needed to submit him to our questionnaire.

Habib, welcome in Belgium... "for the umpteenth time" I should add.
Habib Koite: "Yeah well, Belgium is a bit like my home away from home isn't it?"

I'll come back to that later in the interview, first a remark about your latest album. Between the release of 'Afriki' and its predecessor 'Baro' lays a time gap of about five years.
Habib Koite: "I definitely took my time to release 'Afriki' and I want to apologize to my fans for the delay. The reason for that was simple, though: I was just too busy doing other projects. The past few years I've invested a lot of time in so-called special projects; there was the Afrique Acoustique project and then there was Desert Blues for which we also filmed a documentary. All these things left very little time to record new tunes."

You called the album 'Afriki' or "Africa". Did you intend it to be an ode to you continent?
Habib Koite: "Yes, absolutely, it's an ode to Africa and to my motherland Mali, but at the same time it's also a message for my fans in Europe and America and, musically speaking, I went back to using traditional African instruments."

If you look at the content of yours songs, has that changed a lot over the years?
Habib Koite: "No, that has more or less remained the same. I've always broached social and environmental issues and that's something I'll keep doing. There might be a slight political edge to some of the songs on ‘Afriki', though, and that's new. On this album, I really wanted to address some of the lingering issues that face my continent and my country. I'm talking about issues like the dozens of African youths you see on the news almost every week, desperately trying to reach Europe to start a new life. To get there, they use what we call "les bateaux de fortune" ("the boats of fortune", red.), a trip that often ends in death. I asked myself what I could offer these youths in my capacity as a musician. With the songs on the album I tried to offer them a glimmer of hope, while at the same time I wanted to make them reflect on the consequences of their intentions. It would benefit the continent far more if these youths would stay and help build their countries, thus laying a solid foundation for future generations. Another subject I tackled on 'Afriki' is development aid and the aid organisations involved. In a lot of cases the aid never reaches the place or the persons needing it most. All too often the money ends up in the pockets of corrupt politicians or is spent to fulfil the luxurious "needs" of the aid workers. Only a quarter of all the money that's destined for Africa ever reaches its target destination! That's not my opinion, but United Nations statistics."

Despite of everything, Mali is one of the most stable nations in the region. What's its secret?
Habib Koite: "The Malians are descendants of a very old culture, the Mandingo Empire. It had a very organized and structured society in which everyone was allocated a certain caste, depending on which family you were born into. Some of these castes still exist today and another thing that has survived is the griot tradition. In their paeans the griots pass on the oral history of our people and they also stress the historical ties between certain families. We have a little something we call "sarankouya", simply put it means that, when you learn a persons name in Mali, you immediately know which relationship his or her family has with yours. As a joke we often add that if you know a person's name in Mali, you can't kill that person anymore. All those ingredients put life in Mali in a state of permanent osmosis."

The style of music you play is derived from "dansa" of which you created your own version the "dansa-doso".
Habib Koite: "I put the words "dansa" and "doso" together to symbolise the union of all Malian music styles in my repertoire. "Dansa" is a popular rhythm from the west of Mali, the region of Kayes, and the "doso" are the hunters, the keepers of the old traditions who also have their own very particular style of music. I united these two words to stress that I'm not an artist who just plays the music from my own region. Regardless of the existing language barriers, I try to represent all different musical styles in Mali. That way, I've become a sort of middleman in Malian music and I try to use that to tear down some of the walls that still exist between the different communities."

What makes your music very recognisable is your unique guitar sound. When did that western instrument make its entrance in Malian music history?
Habib Koite: "In Mali we already had various string instruments - there's the kora, the djelingoni, the kamelengoni and the sinbi (seven stringed harp, often used by Malinke and Khasonke hunters, red.) - and when we use the word "ngoni", we often just mean a string instrument. All of these instruments still exist today and are still made by hand, often by the musicians themselves. When the French colonized Mali, they also introduced the guitar and, because Mali already had this vast history of using string instruments, the guitar was quickly integrated into the Malian music repertoire."

Your grandfather was an inspired ngoni player. Why didn't you choose to continue that family legacy?
Habib Koite: "My grandfather and great-grandfather where superb ngoni players - it was often said they made a pact with the devil because they were such virtuosos on their instrument - but my father, who enjoyed an education in classical music, never picked up the ngoni. Instead he focused on western instruments like the banjo, the accordion and of course the guitar. That's also how I learned to appreciate the guitar. You could call it love at first sight. Much later, I went to the academy to learn how to refine my style of playing and to acquire some new techniques."

Eventually you even became a teacher at the Institut National des Arts in Bamako. These days you're touring almost non-stop, does that leave enough time for you to maintain your teaching career?
Habib Koite: "No, I've abandoned teaching, but officially I'm still active as a public servant; at this moment at the department of Arts et Lettres for the Direction Nationale des Arts et de la Culture. My music career has become too demanding. I spent eighteen years of my life at that school. When I had just completed my four year training, the professor who taught classical guitar passed away and, since I finished as the primus of my class, I was asked to replace him. The fact that I now chose to dedicate myself fully to my own career was just a natural progression in the evolution I went through as a musician and my colleagues at the school understood that decision. So, as I said, officially I'm still a civil servant, but in reality you will rarely find me at my office! (laughs)"

Do you think it's important for young musicians to have some sort of academic schooling?
Habib Koite: "Absolutely! My education has allowed me to discover al lot of things I might have missed out on otherwise. I had already learned how to play the guitar before I went to the academy, but, during my training there, I learned to read and write chords, read sheet music and play my instrument in a totally different way. If today it's said that my guitar sound is unique, the roots of that are to be found in my education at the academy. It's there that I learned not to use a plectrum and nowadays I just use my fingers. If one asks me if I deem a formal education a necessity, I will answer: "Yes, absolutely!" every time! One instance I will always remember is the day one of the musicians in one of the first bands I played in, one day brought along a copy of the "Real Book". That's a bit like the Bible for jazz standards like 'Girl From Ipanema' for example. To be able to read a book like that you have to know how to read notes and that's something they teach you at the academy. Being able to read and write music also lifts your creativity to a whole other level."

Let's end this interview with the subject we started with: Belgium.
Habib Koite: "I've got a bit of a special relationship with Belgium because my producers are a Belgian couple (Michel De Bock and Genevieve Bruyndonckx, red.). They've established a small label called Contre Jour that's doing quite well and is still expanding from year to year. We met in 1994 in Abidjan. From the very first concerts I've done in this country, I've always been very well-received and nowadays almost all of my performances are sold out! (laughs)"