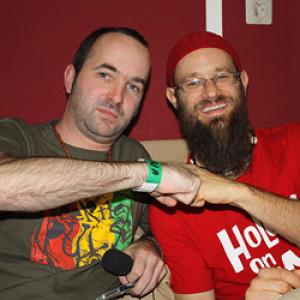 Since our last encounter in 2004, when Europe's reggae crowd had only barely discovered this band from California, Groundation's sound has taken the world by storm gathering praise wherever they play. High time for a second sit-down with band members Harrison Stafford and Marcus Urani.

Harrison, Marcus, welcome in Belgium once more. Checking my archives, I noticed our previous interview already dates back about four years, when you guys played your very first gig in Belgium at the N9 in Eeklo. In the mean time a lot has happened, so high time for a follow-up. I noticed a notable change in the line-up on stage.
Harrison Stafford: "I guess the only change in the line-up is the addition of the girls (Background vocalists Ikesha Johnson and Kim Pommell, red.). We were looking for the right background singers for years and we've tried a lot of girls, but we were never really satisfied with the sound. They weren't really able to capture the roots reggae sound or Jamaican soul vibe we were searching for. Ikesha and Kim, who are from Jamaica themselves, are able to transmit that vibe not only vocally, but also with their stage presence, the way they move to the music. When we met them there was an immediate vibe there and them coming from Jamaica and having grown up with reggae music meant we didn't have to start from zero explaining everything or having to ask them to do this or try that. It was a natural thing really."

Do you feel your music has changed a lot if you compare your latest work with early records like 'Young Tree'?
Harrison Stafford: "For sure. From the first albums until now we've constantly been evolving and changing. Our more recent compositions are much more respectful of the various musicians in the band and we also improvise a lot more than in the early days. I think our music now represents Groundation much more as a group than as a bunch of individual musicians. Lyrics-wise our songs represent the times we live in. In the beginning our lyrics were very clear and simple about the oppressing system and so on, but today things are different; instead of just commenting on and criticizing things, we also want to bring tools to the table to improve things. We've taken a lot of chances also; with each album we kind of pushed the envelope a bit further. With ‘We Free Again' we tested the waters; the response of the people reassured us that we were on the right path and had the freedom to express what we felt as opposed to what we think the music market might require. I think our fans have come to expect us to break the mould and that gives us a lot more freedom. The future will definitely hold a lot more experimentation."

You guys have the freedom of being in control of everything you do: you've established your own label (Young Tree Records, red.) and produce your own music. On the other hand there are the hard realities the music business is facing with dwindling record sales as a result. How are you dealing with those evolutions?
Marcus Urani: "Well, we've really always focused on our music first. We never had a big surplus of money at our disposal. In retrospect focusing fully on our music, on what we are really about, has been a great decision because this way we were never marketed as the next prefabricated musical project. Of course there was some luck involved as well; the reactions of the people can never be predicted and yes, we also feel that album sales are decreasing, but on the flipside of that situation, the internet, which was at the basis of these changes, has been really beneficial for us as well. We're quite popular in South-America, for example. Over there people don't really have the money to buy our records so they pirate them from the internet. At least this way those people know our music and feel what we feel. I think that is much more important than the fact we're making money or not."

Groundation albums are always quite conceptual. Do you think the album as a medium still has a future?
Harrison Stafford: "Like Marcus just said, it's all about the music and it's all about the concept, this larger than life thing we're trying to get across. We still believe in albums and we were already putting a lot of money in our albums when we still had no cash to spare really. At that time we were borrowing money left and right to fund these records, not knowing if they were going to sell at all. Today is not much different really. There are more people willing to back us now because we've attained a certain level and I dare even say that in comparison with the general music industry, where sales are really dwindling, financially speaking, we've got a little more resilience than they do. We still love the vibe an album can generate. You can put a lot in one song, but if you can put an album together you can go a lot deeper in what you want to put across."

Looking at your releases the one thing that still seems to be missing is a good live album.
Marcus Urani: "(laughs) Actually it's in the works. I've got some recordings in my room right now."
Harrison Stafford: "We're just beginning to explore where we can take that, but there will definitely be a live album in the near future. It's a challenge for us because we improvise a lot on stage so we don't play the same show over and over again till we get it perfect. If we had tons of money to spend, we'd probably record all our live shows and put together a great live album. The first time someone suggested doing a live DVD, I remember I was very conscious of the recording process and the cameras, but after the first few songs I said to myself: "Hey, let's just forget this, do what we do best and just play our music!" If we don't like the way the recording turns out, we won't release it. It's as simple as that. People ask us about it a lot though, so I guess the time is right."

In the slipstream of your success over here in Europe, we've had a number of American reggae acts coming over; things like Soldiers Of Jah Army, 10 Ft. Ganja Plant, Matisyahu and so on. You're producers yourself, is there anyone we might not have heard about yet but definitely should keep an eye out for?
Harrison Stafford: "There's these guys from Oahu (Hawaii, red.), Ooklah The Moc. They're a great band. Every time we go to the Hawaiian Islands we perform with them. It's roots reggae with a Polynesian, Hawaiian background. They've got three singers, two males and one female, singing great harmony."
Marcus Urani: "Where producing other artists on our own label is concerned, because of the decreasing trend in album sales it has become much harder for us to produce other projects. We've got to put a lot of money in a project like that and it shouldn't be at the expense of our own survival."

Now you mention it, release-wise it has been kind of quiet on your label recently; any new projects in the pipeline?
Marcus Urani: "We're doing a new side project with Leroy 'Horsemouth' Wallace called Rockamovya. As far as other artists are concerned, like I just said, it's been too hard and too risky so we're putting that on hold for now."
Harrison Stafford: "We were just talking losses to be honest. Not that we don't feel proud of the music we've put out, or that we don't think it should sell, but apparently a lot of people have moved on from the style of music or type of artists we hold dear. Most of the music we love was made in the sixties and seventies when you still seemed to have a lot of artists carrying the torch as opposed to now when it's all big corporations who are producing a kind of cookie cutter music that they know is going to sell. I think you really have to come up with something original and, in the case of our music, not just the next decent version of Jamaican reggae. You have to have something that is uniquely yours to give to the people."

Doesn't that get harder and harder, everything has already been done once, no?
Marcus Urani: "(laughs) Well, yes and no. We're just getting started really."
Harrison Stafford: "Because of our musical education we are able to converse in music. We can show each other exactly what we mean. Being able to read and write music is like speaking another language. A lot of musicians lack that ability and that can be a stumbling block when you are trying to create new and exciting music. If you can only imitate what you've already heard on other records, the result is hardly going to be refreshing. Personally we still have a lot of conceptual ideas that we want to work out further, and because we are in a better financial position now, the time to explore them is right as well, because money buys time. I think the 'On The Bridge' album was the jumping board to things that are still to come."

Last time we met was just after the dramatic re-election of George W. Bush. That era is drawing to a close now, so where would you like to see your country heading politically?
Harrison Stafford: "We often get these kinds of political questions, but we're really all about music, which is much more universal as politics. Being a United States citizen is difficult now and I think I can say we are extremely thankful that a year from now we might be having a new president with a whole new perspective on things. That's already a great thing, because our current president is not a good leader at all. There are so many flaws in the American political system that's it's hard to see a truly great leader rise up and have great thoughts actually come to pass. They can talk great things when it comes to trying to get support, but when you only have a two party system and you call that a democracy, that's really a contradiction. Until you have people who are really focused on changing things, you don't really have anything but a bunch of puppets answering to the oil industry, the tobacco lobbyists and all of these other big things that rule our daily lives and force the politicians to make decisions that aren't good for the environment or for people. I definitely think it's interesting we might be going from George W. Bush to an Afro-American or woman president, but the main thing any of them should focus on is education. Our children are the ones who are going to have to make the wise decisions in the future. If you can ensure a decent education for all your citizens you might stand a chance in the future. I'd like to see changes but whether those changes are going to come from any of the presidential candidates put forward now, is another question."