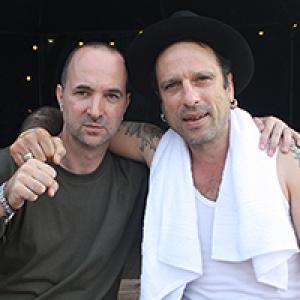 Gregor, I'd become convinced Gregor Terror & The Calypso Gigilos would remain a live act, but now there's finally 'Le Chant De Gregor Terror & The Calypso Gigolos'.
Gregor 'Terror' Engelen (vocals): Gregor Terror & The Calypso Gigolos started as a small side project I didn't have too much ambitions for. When we started out back in 2010, we were still a ten piece calypso big band including marimba and full horn and percussion sections; great fun, but in the end it wasn't financially viable, so I had no choice but to downsize and let four musicians go. These days we perform as a more compact sextet. We've also created our own sound, leaving covering calypso traditionals behind and focusing on self-penned songs.  We baptized our sound calypso mambo noir, as at times it tends to sound a bit darker than original calypso. Calypso music is all about the art of storytelling; the original calypso songs were like the voice of the people, with lyrics brimming with double ententes, real head-scratchers and sarcasm, and penning a song like that is far from easy. For the songs on 'Le Chant De Gregor Terror & The Calypso Gigolos' I joined forces with Donkey Diesel's Gunter Nagels, whom I still remembered as an excellent songsmith from the time I spent as a member of aforementioned band. Of course everybody knows me as the flamboyant front man of Antwerp Gipsy-Ska Orkestra, but following the release of this album, at least for a while, I'd like to focus all my time and energy on Gregor Terror & The Calypso Gigolos. The project also allows me to prove myself as a singer and crooner. I want my fans to realize I'm more than a party animal or a blusterer."

In the slipstream of the rebirth of Calypso Rose's career, there's talk of a small calypso revival in Europe, but, in all honesty, the genre has never managed to pull huge crowds in these parts. Where does your passion for this music have its roots?
Gregor 'Terror' Engelen: "I think it goes back to listening to a lot of reggae music. In reggae and dancehall you've got a tradition of sound clashes, with rivaling sound systems battling each other verbally and musically, amicably hitting below the belt at times. The calypso tradition is quite similar. In Trinidad you had big annual contests where various local calypsonians would compete with one another and the winner was crowned Calypso King (Calypso Rose being the first female calypsonian to be crowned Calypso Monarch in 1978, red.). That was an aspect of the music that really appealed to me and apart from that I've always had the tendency to favor music styles no one or only a selected few are paying attention to. As far as I know, apart from Gregor Terror & The Calypso Gigolos, there's only one other Belgian band experimenting with the genre: Brussels based band Concrete Coconuts, who've taken an approach of blending calypso with brass band music. I'm not a huge fan of revivals, but I'm a firm believer in blowing new life into dwindling music genres and that's exactly what we try to do with Gregor Terror & The Calypso Gigolos. Not by merely copying old calypso standards, but by giving the music a personal touch, thus creating something entirely new and original. I'm also someone who waffles a lot, so lyrically the narrative style of calypso is a perfect fit. That being said, I honestly have to admit that in the beginning I hadn't a clue where to start! (laughs) It's been quite the learning curve. Current concert audiences tend to pay less and less attention to the lyrical content of the songs being played, but I can honestly say that with this band I've already managed to captivate the entire crowd to the point where you could hear a pin drop. Calypso isn't merely dance music, many of the songs contain profound messages and that's exactly one of the things setting the genre apart. As a white European, I can only do my utmost best to interpret the music to the best of my abilities, because true calypsonians are really a breed apart!"

For a while you even entertained the idea of switching to Dutch instead of English.
Gregor 'Terror' Engelen: "I'm still toying with that idea… With Antwerp Gipsy-Ska Orkestra we recorded a number of songs in Dutch. As a result, musicians like Stef Bos, Guido Belcanto and Rocco Granata all came to see me to try and convince me to focus more on singing in Dutch or Antwerp dialect - as I really dislike Standard Dutch to be honest (laughs) - and you won't hear me say that wouldn't work, but after the rearrangement of the band's lineup, we decided to focus on the music and on the sound we wanted to create. We focused on creating an own identity, making sure we wouldn't just become the umpteenth calypso project out there, but being able to offer something that would make us stand out from the rest."

The album is distributed by French label Kaiso Records. How did that relationship come about?
Gregor 'Terror' Engelen: "We simply linked up via the internet! And to be honest, I've never even met the guys behind the label. For two years now, I've been organizing the annual Calypso Cavalcade in Antwerp, and for that event I always have to go in search of calypso bands to book. Searching for a band - and rest assured there aren't that many active calypso bands in Europe - I stumbled on King Huggy & The Calypso Combo, which turned out to be the label's house band. We worked out a deal we could both benefit from. They told me they had been having a hard time getting gigs in France, so I booked them for the upcoming edition of the Calypso Cavalcade October 12th at Arenberg. To return the favor, they promised to distribute out debut album. I told them I'd take really good care of them during their visit of Antwerp and in return they're financing the artwork, mastering… basically everything we couldn't afford! For me this is an absolute first, as I've never worked with an established label before! The fact they're willing to do this without even having met face to face, is a great sign of respect. My only demand was that the album had to be pressed and ready for sale by October 12th! (laughs) We've opted only to make 'Le Chant De Gregor Terror & The Calypso Gigolos' a vinyl release only, of course including a download code for good measure."

In conclusion… When talking about calypso, even people with little or no knowledge of the genre will probably have heard of Harry Belafonte. What does his music represent to you?
Gregor 'Terror' Engelen: "Harry Belafonte is like the Goran Bregovic of calypso music! Goran Bregovic introduced me and many other westerners to Balkan music in the nineteen nineties, and Harry Belafonte did the same for calypso in the nineteen fifties an sixties. 'Belafonte At Carnegie Hall' (RCA, 1959, red.) is an absolute masterpiece in calypso music history. He never trivialized or unnecessarily commercialized the genre, but always performed his songs from the heart. Of course, the real calypsonians were Trinidadian legends like Lord Kitchener, Lord Invader or Mighty Sparrow (Belafonte is of Jamaican-American descent, red). But if it hadn't been for Harry Belafonte, they'd probably never made it off the island!"