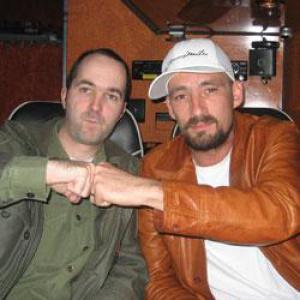 Gentleman: "You know, we can really make a difference with our lyrics! It's very important to keep the message clean, so children can also listen to it. Luciano taught me that lesson. He heard me say some bad words like "bomboclaat" when I was in the studio. He asked me to step out and told me: "Gentleman, you have potential, but don't use those bad words. You want children to listen to your music too!". From that point I took all those words out and started to focus on the things that made me feel good, spiritual things. My father was a preacher. I don't believe in the church, but I learned a lot from him about interpersonal relations and communication between people. We artists really have a responsibility because the people listen to our lyrics. Many artists don't realize this, because if they did they would change their lyrics! For example, when I asked P. Diddy whether he thought his lyrics were appropriate for his children to listen to, he responded: "They aren't allowed to listen to my music!". That is just stupid! My son is just 4 years old, and I want him to be able to look back in the future and tell him: "Look, that's what your daddy used to do!" without having to be ashamed of something. When you press something on vinyl, it will be there for ever! So think twice before you sing something."

You say the message is very important, but at the same time you did collaborations with artists like Bounty Killer and Capleton, who are criticized heavily for their anti-gay lyrics. Where do you find yourself in that whole debate?
Gentleman: "Well, personally I don't have anything against gay people. I don't understand it, but I don't have to understand it. But if you travel around in the world, you will find that most cultures don't accept homosexuality. That's their belief. If we now say: "How can you be against that?!" that's exactly the same kind of judgment.  What people are doing now is terrible. They say: "Sizzla you can't come to perform here no more because you said something about batty boys in your songs.". That's just foolishness. It's a cutting of the freedom of speech and it's a very dangerous line to cross. Everybody has the right to do whatever he or she wants to do. Personally I believe in Adam and Eve, not in Adam and Steve. That's my personal belief, but I don't feel the urge to put that on a record. A lot of people who don't have a lot to say start crossing minorities, but it's not only so in reggae music. I'm tired of that. It's always reggae that is against gay people, but in fact it's everywhere in the world. It's a deeply rooted belief and we have to accept that. That's my personal opinion. Again, I don't have anything against gay people. As long as they don't trouble me, I don't care."

For your second album, 'Journey To Jah', you did a lot of collaborations with some of the biggest names in reggae music today. As a white German boy arriving in Jamaica, how did you manage that?
Gentleman: "It's not about me, it's not about you; it's about us and about the message. Jamaican artists are very sensitive and very spiritual. It's not about where you come from or the color of your skin. If somebody feels your message and wants to share the vibe, it happens. If you take Bounty Killer for example; that guy has a totally different background than me. You could then ask: "Well, how can you do a song together then?". Well, you just meet each other somewhere in the middle. We might have seen certain things a little different, but in the end we did this tune ('Man A Rise', red.) which is about unification. I didn't grow up in the ghetto, I never touched a gun. I don't know about these things, but Bounty Killer does! Members of his family got shot when he was young. He saw things that I haven't, so you can't just go up to him and say: "Hey boy, why don't you sing a little more niceness!". (laughs) But even when you are different you can always find some things you have in common. That's the solution for a lot of the world's problems. We're all individuals with different points of view, but we have to find our common ground."

It seems the situation reversed itself though. When you ask them who they really want to work with, a lot of artists now answer: "Gentleman!". How does that make you feel?
Gentleman: "I feel honored. It's really a present given to me, but I'm just a vessel, a messenger. If the message reaches the people, that's all that matters."

You make conscious reggae. The step from that kind of music to Rastafari is very small, so how do you connect with that whole philosophy?
Gentleman: "Rastafari is something that taught me a lot. I feel there's a lot of truth in Rastafari and if Rasta means "searching for truth", then yes I am a Rasta. But it's not really clear. If you go to Jamaica you will find many different opinions. Selassie is not my God. I respect him as a man and a leader who tried to unite people through his words, but I don't agree with all his actions, like his politics in Eritrea for example. My God is no person, it's a spirit, and it is energy, love. We are all part of God. Bob Marley said: "Selassie I is the almighty!", well that's his opinion, not mine."

The force of women in reggae has never been overwhelming, though we must admit that with strong female artists like Ce'cile, Lady G and Tanya Stephens things seem to be changing a bit. In the form of your background singers you have quite some potential on stage with you. Aren't there any plans yet to put them in the foreground a bit more and have them record an album of their own?
Gentleman: "Yeah, of course! I never even call them background singers, because we're all singers and we blend our voices so the music sounds the way it should sound. Tamika is on my last album. We did an EP with Mamadee and we're working on establishing our own label now. There's a lot of collectivity going on in this tour-bus. Every time someone comes with an idea, we sit down and write lyrics together. There's a lot of potential."

What about Daddy Rings? Are you guys still working together on a regular basis?
Gentleman: "We'll never stop sparring! We've come from so far you know. We'll grow old together. He inspired me a lot, he's like a mentor to me; especially what songwriting is concerned. He's a genius! The same goes for Jack Radics. I think he's one of the most underrated artists in the world! He's working on an album now, when it will be released, it will rock the world! It's outstanding, everything is there: melody, voices, and lyrics. He rides those riddims like a cowboy rides his horse. I'm going back to Jamaica to spend the winter over there, because it gets too cold in Germany, and the next project we're going to do is make a video for that song that I did with Daddy Rings and Barrington Levy, 'Caan Hold Us Down'."

What were your views on the whole Live 8 event? Critics stated it should have featured more African artists or even songs about Africa.
Gentleman: "I think we always need charity events. The main point of this whole thing is making an end to poverty. We are the first generation that has the knowledge and, through the big tsunami disaster, now also the experience to make a difference. We can really beat down poverty. If you look at the tsunami disaster, it showed, how, in a short time, people who feel for other people can help. But now we can't stop! Could there have been more Africans on stage? Sure and there should have been! Africa is a forgotten continent and there's so much wickedness going on there. I spent some time there and when you see all that, it really hurts, but you shouldn't look away either. We're all Africans. That's the foundation, that's where everything started. If you look at your family tree and you keep going back, you will always end up in Africa. The foundation of life was Africa."

Which countries did you visit exactly?
Gentleman: "Well, I didn't see too much really. I went to Ghana two or three times and to Gambia. I want to go to Ethiopia soon. With this project I support, Gemeinsam für Afrika (Together for Africa, red.), I have the opportunity to go there now, see the projects and talk to the children. I'm really excited about that. We're going to do a show in South-Africa soon and we're taking a million condoms along to disperse in the crowd."

The pope will definitely like that!
Gentleman: "Well, the pope can just go home! (laughs)"

On your last tour you kind of skipped Belgium...
Gentleman: "Did I? (laughs)"

Well, I'm sure it was an oversight. What did you think of the reception here at the Reggae Geel festival today?
Gentleman: "It was wonderful. It's a wonderful place here too, full of spirit. We're in the middle of nature. I really appreciated when the sun came out. The people looked very peaceful and really appreciated the music, so that was a blessing for me. I played here five years ago too you know, with Tippa Irie, who's a longtime brethren from England. We had a wonderful session that night too, I remember that. Belgium give thanks, because the vibes were really strong. The people even sang along with the lyrics and that's the best that can happen to you as an artist."

You've almost worked with all the big stars in Jamaica now. Is anyone left on your list, someone that you still really would like to work with?
Gentleman: "Well, there's not really a list you know! (laughs) I'm no Oscar Schindler. There are still a lot of artists, but I learned something; there must be a connection there. There must be a vibe between two artists. You can respect someone musically, but if there's no connection there, there's no point in doing a combination. For every combination I did so far, except for the one with Jah Cure, because he's in jail as you know, there was a vibe there! I would like to work with Sizzla one day though."

You say the message is the most important thing, so to conclude this interview do you maybe have a few words for the people who are going to read it?
Gentleman: "We're here for a reason and we have to appreciate the gift of life, even though it can get hard sometimes because there's so much wickedness going on. I think the wickedness is there to make us appreciate the love. If we focus on this, look at nature, listen to the sound of your breath and you praise Jah, then you can't go wrong! With enough patience you will see that there is a lot of love and righteousness going round too. We can make a difference. We can't necessarily change the world, but, especially with music, we can make it much sweeter. That's why we're here you know. Our parents made love and out of the millions of sperms you won the race you know! If you focus on that, it just has to mean something!"