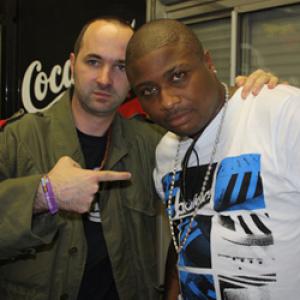 Gappy, for most people outside of the UK you burst on the scene with your 2010 album 'Put The Stereo On'. What's the Gappy Ranks story before that album?
Gappy Ranks: "Well, I'm originally from London, from Harlesden to be more specific. My mother's from Dominica and my father's Jamaican. London is a very multicultural place, so that influenced me a lot, also musically speaking. Harlesden itself has a mostly Jamaican population, so reggae music was in my genes, so to say. Reggae music has been on the decline for some time now in the UK; there's a lack of producers, artists and especially media attention. You could say there was a big gap that Gappy Ranks came to fill! (laughs). It all started with two songs really, done for two different producers and focused on totally different target audiences; on the one side there was 'Heaven In Her Eyes' and on the other 'Stinkin Rich'. Both took off internationally and here I am today, which is a blessing."

'Put The Stereo On' was released by Greensleeves/VP Records, for anyone who knows anything about reggae music an almost mythical name; a dream come true for you?
Gappy Ranks: "Working with Greensleeves and VP, two established powerhouses in the reggae music business, is great. I remember listening to many a Greensleeves record growing up. In the video I did for 'Stinkin Rich' there's a part where the little boy is writing on a Greensleeves record, but I recorded that video even before there were talks with the label."

'Put The Stereo On' and your new album 'Thanks & Praise' almost couldn't be more different in style.
Gappy Ranks: "My heart lays in music, you know, good music because in my view there are only two types of music: good and bad music. For me it was only logical to do a second album that would be totally different from the first one. I like to think of 'Put The Stereo On' as a sort of time capsule that will stand the test of time; 'Thanks & Praise' is more of the moment. Music is about communicating and because there is so much diversity in the world, you can't always communicate in the same way. I've been travelling a lot recently and that will reflect in my music to come."

Does that mean that you would even see yourself doing a non-reggae album?
Gappy Ranks: "Of course! Reggae has been my springboard and it's the music my heart goes out to the most, but I don't feel there's anything wrong with exploring other genres as well. As long as you communicate the same emotions, the same message, it's all music. Different music for different people, that's all it is."

'I Was There' is a song you wrote about the tsunami drama in Japan. It's not just a song, because you were actually there when the whole disaster took place.
Gappy Ranks: "Japan has a big and active reggae scene. On March 11th, the day of the great tsunami, I was in Yokohama city and for the next seven days I was Japanese with the Japanese and experienced the whole aftermath. Now I feel like I was meant to be there so I could tell the world about what happened there. The song is downloadable from iTunes and all proceeds go to the people of Japan. We also shot a video to go with it in Yokohama, which is also the home town of Mighty Crown."

At one stage you hooked up with the crew of Special Delivery, who are based in France. How exactly did that happen?
Gappy Ranks: "Where I grew up, there's a sound system called Silver Star and they were in contact with Pierre (Bost, red.), the CEO of Special Delivery. They sent Pierre a number of my tracks and everything really developed from there. They're a great team to work with, nuff respect to the whole Special Delivery crew!"

I think almost everybody will know by now that you got your nickname ‘Gappy' as a reflection on the gap between your front teeth.
Gappy Ranks: "Yeah, it's just one of these things you get stuck with as a youth. As a singer, I was also hugely influenced by Cutty Ranks, so I decided to put the two together. I never even considered fixing that gap between my teeth, you know, because I believe in life you have to be confident in yourself; if something isn't broken, why fix it? I'm proud of that gap, because it's part of me and what I stand for!"