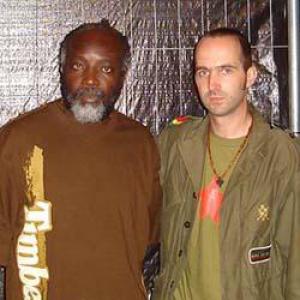 Freddie, or should I call you Mr. McGregor, because I know you're an O.D (Order of Distinction, red.) so, I don't want to be too presumptuous?
Freddie McGregor: "(laughs) No, that's alright, everything good."

I want to take you all the way back to the beginning, when you sang together with Ernest Fitzroy Wilson, from The Clarendonians. What kind of music did you guys do, and where did you play?
Freddie McGregor: "We started doing ska in the sixties, we recorded songs like 'Why Did You Do It' and 'Do Good And Good Will Follow' and then we gradually moved to the area of rocksteady and it just continued from there."

With The Clarendonians you also took your first steps in Coxsone's Studio 1. How do you remember Mr. Dodd and those days?
Freddie McGregor: "Mr. Cox was a wonderful gentleman. He even was a father figure to me at one time, you know. When I first came to Kingston, he took me into his house. I lived with his family for 3 months and then he boarded me out to a Christian family and sent me to a school in Kingston. He was truly a father. I grew up in Studio 1. Every morning we opened the studio and every evening we closed it and went home. That went on for years, ever since 1963. And even up until his passing I saw Mr. Dodd as a true father and Mrs. Dodd as a true mother. I still went to see Mr. and Mrs. Dodd just before he passed away. Nothing but love for Mr. Dodd. He was a true champion!"

You also recorded 'Bobby Bobylon' there...
Freddie McGregor: "Yeah, he was a true champion! All the experience that I have now is from learning from Mr. Dodd at Studio 1."

That album has just been re-released on the Heartbeat label; is that something you're proud of?
Freddie McGregor: "Yeah, I mean it shows 'Bobby Bobylon' is really a collector's item. The album was originally released in 1980, but it will always sell. To see that they are now re-issuing it with bonus tracks, makes me certain the album is going to see another long lifespan."

A song I have to talk about is 'Big Ship'. What was so important about that song that you even made it into your label name?
Freddie McGregor: "I don't know. It was just a vibe thing when it happened. We saw a ship coming into the docks and I shouted out: "Linval look! What a ship there. Look how it big!" I had an acoustic guitar and just kept juggling around the chorus: "Big ship sailing on the ocean". Later on we went to the studio to record some tunes for the album. I remembered the melody, we just recorded it and that was it. But the song itself surprised me, because I never realized it would become such a big hit. At that time England and The Falklands were at war. Ships were passing every day, so that made the song become reality and then on the hand of tourism, just about every cruise ship would play 'Big Ship'. Every summer, when people take boat rides, 'Big Ship' would be the feature song. It's one of the songs that stayed around. Even in the dancehall 'Big Ship' is still one of the songs. It's a good thing."

One of the first albums you did for that label was Judy Mowatt's, 'Black Woman'; a very strong album and one of my favorites in female reggae. Do you remember those sessions?
Freddie McGregor: "Yeah, I remember it was one of my first ventures into production and I remember because we wanted to create the best album, so we put a lot of works in it. I played drums on some tracks and did some backing vocals. We really wanted the album to be a strong one; as it turned out 'Black Woman' captivated the world."

Am I correct if I say that these days your children are also involved in working for the label?
Freddie McGregor: "Yeah, they love it and they are doing their thing. They're talented youths and right now in Jamaica they are becoming the top producers and artists. Chino is a big time artist in Jamaica now and Stephen, who's only 16 years old, built some of the greatest riddims in Jamaica; from Red Bull & Guinness, Cartoon and Breaking News to the new one Ghetto Whiskey."

On a more spiritual level now, on your website biography, the year 1975 is clearly marked as the time when you became a Rastafarian. Why is that year so important?
Freddie McGregor: "Because that was a different time in my life. I started a different movement, a different approach towards life. The Twelve Tribes of Israel became my real focus at that time. It really helped me to shape my music in a different direction, because I would read my Bible, reason about Africa and about the things on earth that are really important. And those are things which lead me to write some strong message songs. I can say I'm proud of the songs that I've written over the years because I've never written anything derogatory ever. It was always about peace and love. The best love song is a culture song; the best culture song is a love song. That's how I want to keep it and be known."

Apart from the music business, you're also involved in charity work. You have two children's organizations yourself, but what do you do concretely?
Freddie McGregor: "Well, I give my support fiscally, vocally, for the McGregor's Children's Fund, which was set up in Birmingham in the United Kingdom. That has been going now for a while. We also try to donate different items to the youths in Gambia. In Florida I have the Big Ship Foundation Inc., which is set out to assist with the renovation of schools and so far we were able to donate half a million Jamaican Dollar to the Haile Selassie I school. So, we just try to do what we can and hope some people will follow and come forward and give us the kind of assistance we need so we can do more."