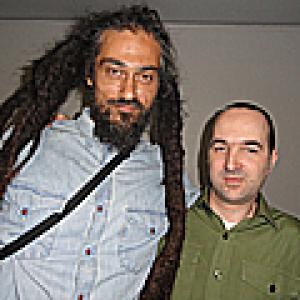 Rico, most reggae lovers will probably know you as a saxophonist and flutist. When did your musical journey start?
Eric 'Rico' Gaultier: "I started playing the sax at sixteen, but at that I'd already been listening to reggae and ska for quite some time. I hail from the southern suburbs surrounding Paris, an area with a large Antillean and African community. Apart from reggae and ska, I'm also heavily influenced by soul and jazz. When I started Faya Dub, I tried to incorporate all these different influences into one sound I could call my own. In reggae I've had the fortune to be able to work with Jamaican veterans like Horace Andy and Winston McAnuff and where jazz is concerned I've mainly worked with Paco Sery (Paco Sery is a jazz drummer and percussionist, born in Ivory Coast and mostly known for his collaborations with Joe Zawinul and bass player Jaco Pastorius. Sery is also one of the founding members of 1980s jazz-fusion band Sixun, red.)."

Is Faya Dub still alive and kicking?
Eric 'Rico' Gaultier: "Absolutely! We've just released a new album called 'On The Road', containing, among other things, 'Teen Town', a cover of the song by Weather Report we dedicated to Jaco Pistorius, who played bass with them, and Miles Davis' 'Half Nelson', which we redid in a ska version."

You also collaborated with Manjul for his 'Dub To Mali' releases. Are you still working together?
Eric 'Rico' Gaultier: "Well, because of the volatile situation in Mali, for a while things were quite hard for Manjul. He even moved to Senegal for a while, but I think he's slowly getting back on his feet now."

On these albums we mainly hear you playing the flute. When did you start discovering the wonders of that instrument?
Eric 'Rico' Gaultier: "My relationship with the flute started about ten years after I started playing saxophone. I suppose most people will recognize the instrument from Jethro Tull, a band that enjoyed worldwide popularity in its day, but the real pioneers of the flute were people like James Moody (James Moody, March 26th 1925 - December 9th 2010, was an American jazz saxophonist and flutist, composer and bandleader, red.) and Roland Kirk (Rahsaan Roland Kirk, August 7th 1935 - December 5th 1977, was an American jazz musician. A multi-instrumentalist he played the saxophone and several other wind instruments like the flute, recorder and the clarinet. Kirk was known for his vitality on stage and his improvisations during which he sometimes used three instruments at a time, red.). Another great flutist who passed away just recently was Yusef Lateef (William Emanuel Huddleston, October 9th 1920 - December 23rd 2013, was an American jazz musician and composer who stood out because he integrated elements from oriental music in his compositions and because he mastered a whole array of wind instruments: apart from the saxophone, he also used different flutes, the oboe, the bassoon, and a number of Asian and African instruments, red.). Something that's often forgotten is that the flute was also used quite often in reggae. Even Bob Marley played the flute! I've got strong ties with French Guiana and over there we started a project with four flutists called Makan. One of them is Joachim Panapuy, a native-American Teko shaman who plays a number of traditional flutes made of wood and bone. It's an instrument you'll find in one form or other in all the different cultures worldwide."

Did the Rastafarian side of reggae music influence you at all?
Eric 'Rico' Gaultier: "I suppose that with the Rastafarian side, you mean the spiritual side of the music? To answer that I would like to quote Bob Andy who stated: "My spirituality is my responsibility!". When I started listening to reggae, before the spiritual side that music definitely has, I was drawn more to the social aspect of reggae, the message it brings. As I just told you, I hail from the suburbs of Paris; the sort of place in reggae would be referred to as "concrete jungle" and I was mostly influenced by European reggae bands like Steel Pulse or Aswad who had a similar background and sang about the experiences of blacks and mixed race people trying to survive in European cities. First and foremost reggae has to get you thinking and questioning the system that surrounds us. In their way of life and philosophy the Rastafarians have managed to attain a level of asceticism. They take this pretty far, even adapting the language they use where they'll change a verb like "appreciate" to "apprecilove" just to avoid using the "hate"-sound. I have to admit that that spirituality touches me, but the music itself touches me even more. Words can limit an individual, but music is a universal language."

Is your stage name, Rico, in any way a reference to the legendary trombone player Rico Rodriguez?
Eric 'Rico' Gaultier: "Well it so happens that when I was in French Guiana in 1990, my mentor Robert Loe-Mie introduced me, among other things, to the music of Rico Rodriguez. But you have to know that in French Guiana people speak Guianese creole and first names are also creolized. My birth name is Eric, but over there people call me Rico. So in fact there's no immediate connection to Rico Rodriguez. In the meantime I've had the chance to meet Rico in the flesh and now I'm even prouder of that name."