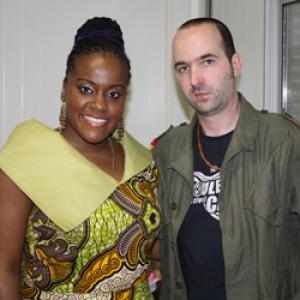 Etana's debut album 'The Strong One' serves as a fresh feminine influence in the Jamaican music scene. We met up with her the morning after her performance at the Couleur Cafe festival (her first performance ever in Belgium) and discovered a clearly tired and slighty broken-voiced but nonetheless very charming and promising Jamaican lady.

Etana, most people in Europe will probably know you as the background singer for Richie Spice, but there's a more unknown earlier chapter to your career; you started out as a member of the all girl band Gift.
Etana: "We were based in Miami, Florida. It was a four girl group with a very sexy r&b image. The last video we did was very revealing; I was wearing Victoria's Secret lingerie, a thong and stiletto heels. At that moment I said to myself that if that was all the music business had to offer I didn't want anything to do with it anymore. I then returned to Jamaica where I opened an internet café. One day a friend of mine introduced me to Richie Spice and things just kind of happened from that moment onwards. I was invited to do a show backing Richie in Los Angeles and before I realized what was happening, I was on the road with him for about a year."

Did the fact that you decided to pursue your own career change your relationship with Richie?
Etana: "Letting him know I was leaving was very hard. We're still friends though, or maybe I should rather call it family, but of course Fifth Element Records has ceased to exist (apart from Etana former Fifth Element members Anthony Cruz and Chuck Fender had also already left the company, red.), so Richie is now doing his own thing as well (Bonner Cornerstone Music, red.)."

When exactly did you start to perform under the name Etana? Was that already during your Gift days?
Etana: "No, the name Etana came when I got back to Jamaica. My real name, Shauna (McKenzie, red.), means "pretty" and every woman is beautiful in her own way, but I figured not every woman had the strength to realize that. I decided I wanted a name that had to do with strength and power, so I looked up a bunch of African names. When I found Etana, I noticed it rhymed with Shauna and meant "the strong one", so I figured it was perfect."

Having an African name, did you already perform in Africa?
Etana: "Well actually, the first show I did as a solo artist was in Gambia. It was a great experience. I remember when I was coming off stage, people were literally trying to touch me and in the end I had to be escorted out by soldiers. It was a moving experience and if I were to live anywhere outside of Jamaica it would be in Gambia or Ethiopia."

Musically, your debut album, which is also entitled 'The Strong One', is a bit of a blend of reggae, soul and r&b. Was it a conscious choice not to stick to just one genre?
Etana: "Yes, because I think that as an artist one should not confine oneself to just one style. That's like locking yourself up in a box. It's much better just to be yourself and express music the way you feel it. When you listen to the album, you will find a different piece of my personality in every song. I like to call it world music."

The title is obviously autobiographical.
Etana: "As I said, Etana means "the strong one" and I decided I wanted my debut album to go out as an introduction of myself."

You've already been called the Jamaican answer to Lauryn Hill. What do you think of that comparison?
Etana: "(laughs) I love Lauryn Hill, but I also love Tracey Chapman and India.Arie, who I also have been compared with. If that's what the people feel, I guess I have to go with it, but really I'm only expressing myself, telling my stories and portraying the way I look at life."

As a female roots singer, how do you see yourself fitting in in that mostly male dominated world?
Etana: "When I was still at Fifth Element, I was always the only woman among all the men. A couple of them would always escort me on and off stage and generally they treated me real royal. I've never been disrespected. Off course I have to give thanks to Marcia Griffiths and all the sisters that came before me and that went through the disrespect, sexual harassment and so on."

What's your take on Rastafarianism?
Etana: "There are things in Rastafarianism that I don't embrace, especially when it comes to the voice of women in the movement. A woman is not allowed to speak during religious ceremonies and she's not allowed to participate during the period of her menstrual cycle. It just feels like women don't matter that much in many ways. If you look at the Bible, you will notice that that kind of started from the very beginning with Eve coming after or even from Adam (Genesis 2:21: And the Lord God caused a deep sleep to fall upon Adam, and he slept: and he took one of his ribs, and closed up the flesh instead thereof; and the rib, which the Lord God had taken from man, made he a woman, and brought her unto the man. And Adam said, This is now bone of my bones, and flesh of my flesh: she shall be called Woman, because she was taken out of Man, red.). Apart from these issues I can embrace Rastafari; the whole philosophy of living in love and unity and togetherness, sharing what you have, has been in me from when I was still a little girl. I believe His Imperial Majesty Haile Selassie I and Empress Menen have set a perfect example of how the balance between man and woman should be. Empress Menen was never behind Emperor Selassie, but always next to him. Emperor Selassie also believed in building Africa by educating the people up to the point where they could govern themselves. Unfortunately that point was never reached (Emperor Haile Selassie I was dethroned and later executed by a communist inspired military coup in 1974, red.)."