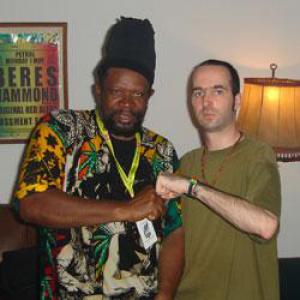 Respect Flabba, nice to have you back in Belgium.
Errol 'Flabba' Holt: "Yeah man, it's been a long time since I've been here. It's the music industry you know; they cheat the people and want them to stray, but roots and culture and its message of protest has to be there! This is Errol 'Flabba' Holt, seen, Jamaica's number one bass man, Roots Radics band leader. Belgian people we love you every time! Keep up righteousness and don't get into any mix-up and folly because when you do the right thing Jah will love you, but when you do bad things you're working with Satan and we don't want that. You see what I'm dealing with? Rastafari! God is love. What do you say now my brethren?"

You are the bass man of the Roots Radics band...
Errol 'Flabba' Holt: "No, not just the bass man, I am the founder of the band! It's me who came up with the name ‘Radics', because it was al about being radical, not in a sense like when you go out to kill people, but in a roots kind of way. So it's all about the roots, the radics and the reggae! All the artists like Yellowman, Barrington Levy and Gregory Isaacs and of course Israel Vibration played with us. They are something else! Not just because they're called Israel Vibration, but if you listen to their message you don't know what is happening! Israel Vibration, I love them every time! Wicked!"

When and how did you pick up the bass? Was that always your instrument from the very beginning?
Errol 'Flabba' Holt: "No, you see at the beginning I played the guitar, but one day they put a bass in my hands and told me to play that. Growing up I had listened to a whole heap of bass men, but I never copied no one; I just sat inna mi yard and made up my own style saying to myself: "I'm gonna kill all them bass men in Jamaica!" But I sing as well you know (starts singing): "My eyes told me that my heart is in danger..." That was the first tune I sang to myself and when people heard me they were surprised and said: "Boy so you can sing as well then?""

Why don't you ever tour just with the Roots Radics then, instead of backing other bands?
Errol 'Flabba' Holt: "Well, I can't do everything at the same time you know and over the years my bass playing took priority on my singing, so I just focused on that."

A lot of musicians stick to one brand of instrument. Is that also true for you? Is there one type of bass you stick to or do you play whatever is around?
Errol 'Flabba' Holt: "Right now I play a Fender, because some other basses can get a little heavy on the shoulder when you wear them, so on stage I prefer a lighter one. On that Fender I played about all my hit tunes and it's the bass I love to travel with."

How did the Roots Radics really come about? Why did you decide to bring these guys together at that particular moment?
Errol 'Flabba' Holt: "At that time I was playing with Blacka Morwell in The Morwells and one day a bredda came up to me and told me to form my own band. I came up with the name Roots Radics and from there things kind of took off. We started playing with Gregory Isaacs on a whole heap of nice tunes like Night Nurse and so on. After that people like Yellowman, Barrington Levy, Bunny Wailer and Michael Prophet soon followed. I can't tell you the amount of tunes we played on. I remember the first time I found myself in the studio trying to lay down the best bass line I could to make my name. I wanted to kill straight from the start. I played nuff bass lines for Beres Hammond too, you know. Beres my brethren, you know!"

Ever since I attended my first Israel Vibration concert you guys have been opening with 'Rockfort Rock'. What's the deal with that tune?
Errol 'Flabba' Holt: "'Rockfort Rock' is really an old time Cuban song ('El Cumbanchero' by Rafael Hernandez, red.), but that tune has almost become like a national anthem in Jamaica. I love that song and I love instrumental songs in general really. There was a tune called 'Ball Of Fire' by The Skatalites that used to drive me wild too, but I didn't love any tune as bad as 'Rockfort Rock'. People still go crazy for it every time we play it. Wicked tune! We could play any tune we wanted really, but we just love that one. That type of song will never die! ‘Rockfort Rock' dates back from in the early sixties somewhere and it's still as strong today as it was when it was first played. I could have gone for ‘Drum Song' too, but I wanted something more up-tempo."

It has become like a signature tune for the Roots Radics.
Errol 'Flabba' Holt: "Yes man! It's like an anthem now. It's also because the people like it so much that we keep playing it, because you can't just say I want to play that or that tune if the people don't love it."

To end the interview I would like to give you some names and you can just respond by explaining what they mean to you. Let's start off with: Israel Vibration?
Errol 'Flabba' Holt: "I really love that group and we've played together for a long long time now. Israel Vibration sings protest songs. If you sit down and really listen to the words of Israel Vibration songs, you will hear things that are going on in the world right now. They don't just sing any old songs, their tunes have meaning!"

A logical next one: music?
Errol 'Flabba' Holt: "Well, you see, music is a thing that soothes your mind. You won't hear me fighting down any type of music, but personally I only listen to music that soothes my mind. I don't listen to any violent music, because it's like when you are watching a violent movie, after you've watched it you start to think and behave the same way. I especially like the old-time tunes like the ones from Studio 1 or Duke Reid's, but when I hear some of the new stuff that's out there, it doesn't really feels like anything, it's like garbage they throw out. The tunes they produce nowadays don't really last long either."

Music has almost become a disposable product now.
Errol 'Flabba' Holt: "Yeah, you hear those tunes today and forget about them by the next day. What's up with that? When you come to a Roots Radics or Israel Vibration show, I try to please my audience every single time. I want the people to go home feeling pleased, not feeling bad or even robbed."

In conclusion: His Imperial Majesty?
Errol 'Flabba' Holt: "Well, nuff people say Selassie was God; others just said he was a king. I grew up amongst a lot of Rasta men in Jamaica, and from ever since I was a little boy I heard and saw them praise Selassie as God, so that's what he became for me too. Everyone had their own God to pray to except for us, so that's why he's my God. Everyone has to decide for himself though because you can't tell another man how to live his life! You see what I say?"

Yeah, respect that.
Errol 'Flabba' Holt: "Same bredda, different mind! If a man wants to choose a certain livity, he should be free to do so. I try to show the right way every time, now if someone still chooses to go astray, that's their choice. In every thing you have a choice between good and bad!"

Flabba thanks a lot for doing this!
Errol 'Flabba' Holt: "Belgian people, Flabba Holt loves you every time! Every time I come here I feel nice, I should come more often. Respect!"