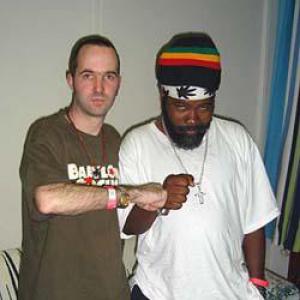 Elijah, it's not usually one of my first questions, but we've been waiting for it with such eagerness I'm going to do it anyway. Tell us about your upcoming album. When will it be released? What title will it have and what kind of an album will it be?
Elijah Prophet: "Well you know Elijah Prophet is always roots & culture. The name of the album will be 'King Of Kings' and it will be released by the end of August or the beginning of September 2006. It will feature around sixteen nice tracks."

Are you releasing it on the German Pow Pow label?
Elijah Prophet: "Yeah man! It's a Pow Pow production."

How exactly did you hook up with them?
Elijah Prophet: "Well actually Pow Pow is a man who is always searching for new talent. He came to Jamaica, Utan Green introduced him to me and we started working from there. The first time I worked with Pow Pow was for a tune I did on the Shanti Town riddim ('Put People First', red.)"

One of your most well-known songs is a tune called 'Shotta'. That tune deals with the gun culture in Jamaica. You talked about the issue twice here on stage tonight, so is it a topic that you really care deeply about?
Elijah Prophet: "Yes! Really and truly it hurts me because all I see is man killing man. It nah really matters whether you're black or white. Believe me, the man who made the gun is a wicked man! We really have to consider what the next 25 years will be like. We really and truly need to think because if the gun is the answer then what about life? Nobody seems to remember anything about the Almighty, all them think about is where they can get the newest gun and who they can kill with it."

As a singer you carry a big name, not an easy one to carry I imagine because it is one of the biggest names from the Bible, namely that of the prophet Elijah. How did you come by that name?
Elijah Prophet: "I went to Kingston round about 1995, after Garnet Silk died (together with Utan Green, Garnet Silk was a mentor for Elijah, red.), and passed by the Caveman Studios. Omar Harris asked me to sing, he liked what he heard and asked me my name. But when I told him he said: "No, that's not a good name!" He sat together with Jennifer Barret and Kenneth Culture and together they came up with the name Elijah Prophet. So that's really how I got the name and I'm truly thankful for it."

You just mentioned the name of Garnet Silk, who was one of your tutors together with Utan Green. How do you remember him, because his death was a great loss for the music world in Jamaica and reggae in general?
Elijah Prophet: "Garnet is really missed, but for me personally he still lives on in I&I heart and in the hearts of a lot of people. Garnet was really a future soldier. His name will live on for centuries though. He did a lot of great things."

You're an actual singer. In a scene dominated by singjays and dancehall artists is it still easy to be a real singer?
Elijah Prophet: "That's a good question. I wouldn't say it's hard nor that it's easy, but when you have a gift from the Almighty you have to use it wisely and that's what I'm trying to do. I will do the best I can, not just for mankind but foremost for the Almighty. Once he is pleased, mankind will be pleased."

How did Rastafari find you?
Elijah Prophet: "I was born a Rastafarian seen, really and truly. I&I grandfather was a Rastaman and my grandmother used to be Rasta too; a lot of people in my family really. But honestly I have to say Rastafari found me in a spiritual way that can not be explained. It was a thing that was there from birth but only showed up at a later stage."

To end this interview, I would like to give you some names and you can just respond by telling what they mean to you. Let's start with your home country: Jamaica?
Elijah Prophet: "Yeah! Jamaica means a lot to me you know. That's where I was born. Whether for good or bad, it means a lot to me. I love Jamaica straight!"

The place where you are recording and performing now: Germany?
Elijah Prophet: "Well, I just see it as a place where I perform and do tours. I'm still based in Jamaica though. I don't know what the future will bring but for now that's the situation. It's really a blessing for me to be able to come to Europe to perform for the people and see them enjoy my work. It will always be a pleasure for me to come here."

His Imperial Majesty?
Elijah Prophet: "His Imperial Majesty Emperor Haile Selassie is real. When I call him, he answers me. And as you might have noticed he gives me a lot of vibes on stage, so I have to give thanks onto the Most High Jah Rastafari! Yeah man!"

The last name I want to give you is the reason we are here tonight, a man we owe a lot of respect, Robert Nesta Marley.
Elijah Prophet: "Yeah man! A great great great man! He paved the way for reggae especially for cultural music like what I do. Mr. Marley did a lot! I wish he was here tonight to see what was going on, but even if he's not here in the flesh, he's here in spirit. Respect due to Bob every time! He's a reggae icon."

Elijah I want to thank you for this interview. Hope to see you around again soon and I'm looking forward to the album.
Elijah Prophet: "It's always a pleasure to do things for people. Give thanks to the Almighty and to the I for doing the interview. Love Belgium! I hope to be here again soon to because I love people who can give me vibes like that. More love! Respect to my friends from Germany, Pow Pow and Wild Pitch crew, and to all my supporters and the sound crews that play I tunes! Bless!"