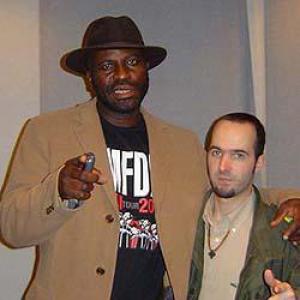 Eek, you've got one of the most peculiar names in reggae and I read somewhere that it has something to do with a horse. What's the exact story?
Eek-A-Mouse: "Well, there was a horse named Eek-A-Mouse. I used to place bets on him but he kept on losing all the fucking time. Then one day I decided not to put my money on him anymore and of course that day he won. After that my friends started making fun of me and calling me Eek-A-Mouse. I didn't like it at first but the horse kept on winning so I identified with that saying anything I did was Eek-A-Mouse-style."

You also have a very unique vocal style. It's not easy to compare you with anyone else.
Eek-A-Mouse: "There's nobody in the world that sounds like Mouse. That's how I got rich!"

Where did you get your inspiration then? Who did you look up to as a youth?
Eek-A-Mouse: "I really just liked singing, but I liked people like Nat King Cole, The Beatles, Patsy Kline, James Brown, Sam Cooke; a whole bunch of different people, but my style just developed one day when I was walking down the street and started improvising."

When you perform on stage you're often dressed in the most extravagant outfits, outfits that remind me of the great funketeers of the seventies, people like Bootsy Collins or Larry Graham. Am I right in assuming that's where you got your inspiration?
Eek-A-Mouse: "I guess you are, but I just like wearing costumes on stage. (laughs) It brings out a different part of the Mouse and the people love it."

There has always been a humoristic side to your music. Is that important to you?
Eek-A-Mouse: "I just sing my songs and I guess it comes natural to me. I'm just doing my bang-a-ding-dong! (laughs)"

You started out as a dancehall artist in the eighties. Nowadays the whole dancehall scene seems to have become a lot more aggressive in nature.
Eek-A-Mouse: "Yes, it has become more aggressive because all these fucking reggae Taliban keep on singing about hating and killing people. They want to kill the gays and kill the lesbians and so on. I don't see the gays and lesbians killing nobody! Gay and lesbian people are some of the most peaceful people on earth. It's those straight motherfuckers I'm scared of! Some of them are cool though, but a lot of them are too extreme and that's dangerous."

What prompted to leave Jamaica at one stage?
Eek-A-Mouse: "I decided to leave because the police was after me. There was an incident at Reggae Sunsplash, where I had a problem with one of the promoters. He sent the cops after me. I decided I had enough of that and left."

You returned to the Island just recently after a long absence.
Eek-A-Mouse: "Yeah. I was in America for the past nine years because I have some kids there and I have to take care of them you know. On top of that there was so much violence going on in Jamaica, so I didn't mind staying in the States, but as you say, I went back recently and it was a good experience. I met Junior Gong (Damian Marley, red.) and he asked me to do a song with him. It's called 'Khaki Suit'; a big hit in Jamaica right now!"

Actually, I just got the album yesterday.
Eek-A-Mouse: "So it's been released? Good! He's a little genius that Bob Marley kid!"

In the course of your career you worked with a lot of the top producers in Jamaica. Do you have any favorites among them?
Eek-A-Mouse: "They are all unique, but for me there was one who was different and that was Junjo Lawes. He was a genius. I'm sorry he got killed. God bless his soul."

In the nineties you played a small role in the movie "New Jack City" (Mario Van Peebles, 1991, red.) and you were offered, but turned down, a bigger role in a Steven Seagal picture. Is acting something you might pursue again in the future?
Eek-A-Mouse: "I might do that, because it's easy you know. I wasn't really pursuing it in the past but everybody keeps asking me this so I might have another stab at it. Who knows, I might be a good actor! (laughs)"

To end this interview, I want to give you a couple of names and you can tell us what they mean to you. Let's start with your current place of residence: California?
Eek-A-Mouse: "Surfers! A place where you can get some good green. Nice beaches. I love California, especially San Diego."

With more and more reggae artists settling there, is there a vibrant reggae scene in California?
Eek-A-Mouse: "I think they come there for the weed. Anywhere there's weed, the reggae artists will follow! (laughs)"

Your birthplace then: Jamaica?
Eek-A-Mouse: "I am born and bred in Jamaica. I still go there, but I like to travel the world."