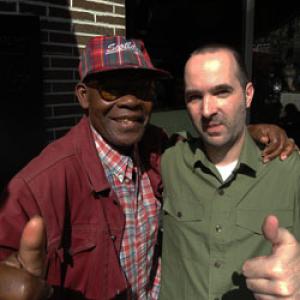 Eddie, let me start by stating you're one of these famous ex-alumni of the illustrious Alpha Boys School in Jamaica.
Eddie 'Tan Tan' Thornton: "If you ask me, Alpha Boys School is one of the best schools on the island. It's run by nuns (members of the Order of Mercy, red.), Mother Claver (Sister Mary Peter Claver, born Justina 'Jessie' Ripall, red.) being the original mater of the school. It was a very nice play to be and I've never regretted going there."

Not everybody ended up at Alpha though; what's your story?
Eddie 'Tan Tan' Thornton: "Well, sometimes you hear people say it's a school for wayward boys, but that's not really true. In my opinion, it was far closer to an orphanage. For children without parents or for children whose parents didn't have the funds to afford a decent education, Alpha offered a solution. My parents both passed away and through the musical education I got at Alpha, I was able to travel all over the world and as a devout Christian got to visit wonderful places like Bethlehem in Israel and Fatima in Portugal! To be able to visit the place where Jesus our Lord and Saviour was born is worth more to me than all the money this world has to offer!"

Alpha obviously not only offered you a musical education but also instilled a deep sense of spirituality?
Eddie 'Tan Tan' Thornton: "Yes, absolutely! When I was still at Alpha I used to act as altar boy. I know a little Latin and when my mother was still alive she always used to take me to Sunday school. I've always felt a profound love for Jesus and I've always believed that even my father's passing was a blessing in disguise; if he had died just a few months later, I wouldn't have been eligible anymore to go to Alpha because of my age. I'm a blessed individual!"

Your status as a trumpeter can easily be described as legendary, but was it your instrument of choice from the very beginning?
Eddie 'Tan Tan' Thornton: "Well, yes actually, but because a lot of people wanted to play the trumpet at Alpha, I was given the tuba instead. It was the only way I could join the band, so I accepted, secretly hoping I could still pick up the trumpet at a later time. Rico Rodriguez used to play the trumpet before he switched to the trombone and Don Drummond played the French horn and the tuba before he switched to the trombone; it was a normal thing at Alpha."

One of the big inspirations behind the music department at Alpha was Sister Mary Ignatius. You were very fond of her, weren't you?
Eddie 'Tan Tan' Thornton: "Oh, I was Sister Ignatius' favourite student, her best boy, no doubt about it! The reason for that is the fact I always showed respect and good manners and always worked hard. Sister Ignatius always referred to me as her "son" and I truly believe that it's through her guidance that I turned out well. She used to pass by and stay at my house in London every year and whenever I would go to Jamaica she would always come and meet me at the airport. I considered her as being a member of my family and I still think of her every day. When I go to Jamaica now, all I have to look forward to is visiting cemeteries, but it gives me a good feeling still. There's not really much use for me to go to Alpha now because everyone I knew there passed away."

The first band you joined when you left Alpha was Eric Dean's Orchestra.
Eddie 'Tan Tan' Thornton: "Well, before that even I joined Roy Coburn. With Eric Dean's Orchestra we played six nights a week at the Colony Club. Ernest Ranglin was also in that band and we played mostly standards from the likes of Duke Ellington or Count Basie, Glenn Miller and Larry Lamb, big band music. In Alpha they only taught classical music, but that's a great foundation to move onto other things."

Having a successful career playing for these bands, why then did you decide to leave Jamaica at one point?
Eddie 'Tan Tan' Thornton: "I had fallen in love with a girl, but when her mother sent for her she migrated to the United Kingdom, so I simply decided to follow her. My aunty was actually trying to bring me over to the United States in that same period, but the president at that time, Henry Truman, had signed a bill reducing the number of Jamaican immigrants allowed entry to the US. These days they pay me to come and play in the US, so I guess everything worked out for the best after all."

Over the course of your career, you've played with an enormous list of musicians; did any of them manage to gain a special place in your heart?
Eddie 'Tan Tan' Thornton: "No, not really, the only people that have a special place in my heart are the nuns from Alpha.  I played with everybody from The Beatles and The Rolling Stones to Jimi Hendrix, Boney M, Bob Marley and more recently Jools Holland & His Rhythm And Blues Orchestra, so I just feel blessed having had the opportunity to do all that, but if you ask me about names I'd rather mention someone like Saint Cecilia, the patron saint of music. I guess I'm kind of old-fashioned in that way."

As a Christian playing reggae, you must have bumped into Rastafarians more than once in your career.
Eddie 'Tan Tan' Thornton: "I used to play with Aswad, who were a Rastafarian band, but a lot of the so-called Rastafarians you see on the streets aren't really Rastafarian at all. These guys think being Rastafarian is only about wearing dreadlocks and smoking ganja. Real Rastafarians are very hard to find these days. The Bible states: "Many are called, but few are chosen!" (Matthew 20:16, So the last shall be first, and the first last: for many be called, but few chosen, red.) Personally, I don't judge anyone, that's up to the Father, but I'm not afraid to say that there are a lot of wolves in sheep clothing around; people who are often so narrow-minded they can't see from the eye to the lid, just going around hating everything and everybody."

Personally, I know you from the work you did in ska and reggae, but I believe your heart really lies with jazz music?
Eddie 'Tan Tan' Thornton: "I'm a jazzman, yes, a Clifford Brown man (Clifford Brown, October 30, 1930 - June 26, 1956, aka. ‘Brownie', was an influential and highly rated American jazz trumpeter. He died aged 25, leaving behind only four years' worth of recordings. Nonetheless, he had a considerable influence on later jazz trumpet players, red.). I still practise using his books almost every day. He was the only trumpet player that could really move me with his music. Don't misunderstand me, there have been a lot of great trumpeters, but to me Clifford Brown is in a category of his own. His style of playing was very uncomplicated and melodic and he played every register possible. The best tip I could give you is to go in search of a Max Roach Quintet album and you'll understand what I'm talking about."

Getting a nickname is a typically Jamaican phenomenon. How did you end up with yours?
Eddie 'Tan Tan' Thornton: "Our family name is Thornton, which in Jamaica often is pronounced as "tantan", so that's where I got it from. To "tan" also means "get some colour in the sun". My father already had the nickname and it was passed down to me. When I went to China, I even discovered that Tantan was one of their great emperors in the past (Eddie is probably mixing up the Tang dynasty and the popular Chinese surname Tan here. He might also be referring to the Tian Tan temple complex in Beijing, also known as the Temple of Heaven, red.)."

A man of your track record and age can pretty much choose who he wants to play with. These days you've teamed up with Kitty, Daisy & Lewis.
Eddie 'Tan Tan' Thornton: "Yeah, it's been a great experience so far. I've been with them for about two years now and I'm certainly not doing it for the money or anything like that.  It's just a lot of fun and I've really grown fond of them. They are two sisters and a brother and their mother and father also play in the band. Sometimes you have to do things because it's what you can give them instead of the other way around. This will probably be the last band I will play with in this lifetime. My wife already told me a man of my age shouldn't be touring anymore and if I would tell her I'm sleeping in a tour bus she would probably go crazy, but what can I do? It's the only thing that makes me happy! There's nothing I could long for anymore. I've even bought a spot at the cemetery where I want to be buried already; Gunnersbury cemetery, a beautiful place just two minutes from where I live, so my kids can come and look for me whenever they want! God bless you and keep up the good work!"