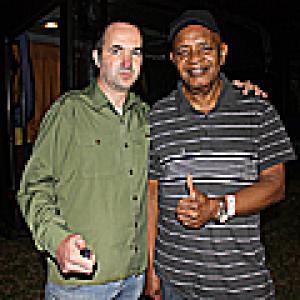 Dwight, musically speaking, one of the first things you were involved with, was a band called The Sharks.
Dwight Pinkney: "The idea behind The Sharks was really to offer a Jamaican answer to The Beatles. Like The Beatles we were also a four-man band, but we also did backings and one of the first recordings we did in that capacity was 'Put It On', one of The Wailers' early singles. Back then we still mostly played homemade instruments as we couldn't really afford to buy professional ones. We were far from bad musicians though and soon we got offered a contract to be the resident band at a hotel in the Bahamas. It was an opportunity we couldn't really pass up, but it did kind of cut our recording career at Studio One short. I think we stayed on at that hotel for about two years. When we returned to Jamaica The Sharks disbanded, and together with bass player Michael Williams (aka Mikey Zap Pow, red.) I formed a new band called Zap Pow. We also got trumpeter David Madden and saxophonist Glen DaCosta involved. The first recording we did with Zap Pow was a tune called 'Mystic Mood'. Over time we worked with various vocalists: Bunny Rugs sang vocals for a while, Jacob Miller as well and then you had the young Beres Hammond of course. I guess you could consider Zap Pow to be the first Jamaican show band. Bands like Third World and Inner Circle were all influenced by us. We recorded an album for Island Records ('Zap Pow', Mango, Island Records, 1978, red.) but we were kind of eclipsed by the success of Bob Marley & The Wailers."

When things with Zap Pow came to an end in 1978, strangely enough you decided to return to school.
Dwight Pinkney: "Well, up to that point I was completely self-taught and I felt the need to formalize my craft. I enrolled myself at the Jamaican School of Music and was taught by a great American jazz trombonist called Melba Liston (Melba Doretta Liston, January 13, 1926 – April 23, 1999, was an American jazz musician. Her collaborations with pianist/composer Randy Weston, beginning in the early 1960s, are widely acknowledged as jazz classics. In 1973 she took a break from her US-based musical projects, moving to Jamaica to teach at the Jamaica School of Music for six years, before returning to the USA to lead her own bands. During her time in Jamaica, she composed and arranged the music for the classic 1975 comedy film 'Smile Orange', red.) and Peter Ashbourne (Peter Ashbourne, born 14 July 1950, is a Jamaican musician and composer who has worked in classical music, jazz, and popular forms such as reggae. Born in Kingston, Ashbourne attended the Jamaica School of Music and the University of the West Indies before graduating with a bachelor's degree in Composition and Arranging from the Berklee College of Music in Boston. An experienced composer and performer, Ashbourne has taught at the Jamaica School of Music in its Jazz Department from 1976 to 1979, red.) was also one of my tutors. I spent two years honing my craft and was subsequently asked to start to teach there myself. Around that time I got a lot of requests to play as a studio session musician and that's where I ran into the guys from Roots Radics. Noel 'Sowell' Bailey, the band's guitarist, had just left, so they offered me the position and gradually I became their spokesperson as well. During my time with Roots Radics we played with just about every artist in Jamaica you could name as at the time Roots Radics was really considered the go-to band. At that time Roots Radics was made up of Eric 'Bingy Bunny' Lamont (guitar, red.), Wycliffe 'Steely' Johnson (keyboard, red.), Errol 'Flabba' Holt (bass, red.), Lincoln 'Style' Scott (drums, red.) and myself. Together with Sly & Robbie we ruled the roots scene throughout the nineteen eighties. When we landed a contract with Doctor Dread's RAS Records label, we kind of became the regular backing band for Israel Vibration."

In 1999 you finally released your first solo album called 'Jamaican Memories By The Score'. Why did it take you so long to produce a first solo effort?
Dwight Pinkney: "The thing is that I've always been in high demand; I've never been short of work and that kind of distracted me from focusing on my own solo work. It was Keith Francis who really gave me the push I needed to record 'Jamaican Memories By The Score' and I have to admit that album really made me gain a name for myself as an established guitar player. Since then I've recorded several other solo albums, the most recent being 'Dwight Pinkney Plays The Ventures & Jamaican Style' (Tad's Record, 2011, red.)."

Have you always stuck to a certain brand of guitars or doesn't that matter all that much to you?
Dwight Pinkney: "I'm very flexible where that's concerned. My regular road guitar is a Parker, which is very lightweight so easy to carry around with me on tour. Right now it's being repaired though, so I'm playing a slightly heavier Ibanez and for a long time I played a Gibson. I'm always experimenting with other guitars to be honest. The only brand I've never tried yet is Fender Stratocaster/telecaster, but I'm planning to purchase one soon. Different guitars make for different inspiration!"