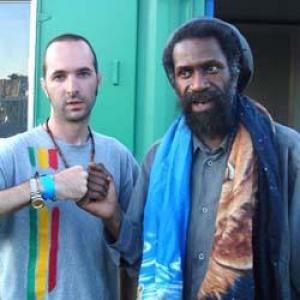 Judah, you've been working with Twinkle Brothers for the longest time. When did you guys get together? When did that all start?
Dub Judah: "I joined the band in 1990. Before that I played in Jah Foundation & The Foundation Players. All that time, in between things, I've been doing my own thing, but I've been working with Twinkles now for about 15 years."

You're a well-known bass player in Europe and around the world, but you are also a solo artist in your own right. Which of the two do you prefer?
Dub Judah: "Well, I don't particularly prefer any work, as long as I can play my instrument and get my tunes across I feel good. I'm always going to love to play my own tunes, but it's the message that's more important. And I always get my message across and that's the main thing."

Where did u learn to play your instrument?
Dub Judah: "I don't really know how I learned to play, to be honest. I just picked it up and started to play just any piece I wanted to play. I just practiced that tune and gradually learned how to play. I was playing piano when I was seven, just a one finger thing, and when I was 11, I realized you could play cords and bass at the same time, so I started doing that and after a period of time, when I left school, I told myself to get a bass and started from there. I used to play drums with an African band too, you know. We played makossa and so on...I can play really any style."

You checked everything out before you settled with the bass then?
Dub Judah: "Yeah, when I first learned to play the drums, I lent my bass to someone and gave him the benefit. He learned to play bass, while I was learning the drums. We spent a year like that so I could do whatever I wanted and then go back to the bass. On stage I try to stick to the bass nowadays and keep away from the drums (laughs), but at the same time, if I had to, I would do it you know. Not long ago Harare Dread asked me to do a spot with him, but that got canceled. I try to not let the people know I play drums; because too much energy gets wasted on me! (laughs)"

Talking about your own work, there are a lot of stepper fans out there in Europe, but I always hear them complaining that Dub Judah music is so hard to get. What's up with that?
Dub Judah: "Well, there are two sides to that. I want music to be special, so each one is like a dub plate to me. I want the message to go out but I don't want to cover the world in vinyl, seen. Gradually I'm re-releasing some of the older tracks now, some stuff of the past, and I've got plenty more to come. Many artists come to check me, so I build riddims for them as a session musician and when I have some time left, I use it for myself."

All right, to end the interview I'm going to give you some words and you can respond by telling me what they mean to you. Let's maybe start off with: music?
Dub Judah: "First of all it's a good vehicle for carrying special words. Music is like King David. That was one of his key things. He was a good musician and he used it to spread his words. That's how I use it today, as a vehicle. Also it's a kind of relaxation, enjoyment, all those kind of things."

Dub?
Dub Judah: "That's going into another element now. That's about time delay. With dub music you will find mostly conscious lyrics and vibrations. Whether there are words on it or not, you'll find those vibrations. My first love was dub. I mainly liked the B-side of most records that came out; whether I liked the vocal or not, I always liked the dub. That's mainly my style, and now we've reached today, when a man can do his own thing and make his own music."

As a last one then: Rastafari?
Dub Judah: "Rastafari is a light that guides the world. It's a king, a god and the one that shines the light for us. At the time when he was crowned King of Kings, we were just barely coming out of slavery, or maybe you can even say, we were still in slavery. He busted the chains and people started to look at Africa and saw H.I.M. as a great King. Everybody that knew H.I.M. was able to hold their head up, even the poorest of the poorest and the lowest of the low. The dynasty goes way back. It's the first, all other kings have to bow to Haile Selassie. Most kings from back in the days had to go to the river Nile to be crowned, even Solomon and David, had to go to the river to be anointed. The story of Rastafari is older than history itself, you know."

Thanks for these words of wisdom.
Dub Judah: "Rastafari! Blessed!"