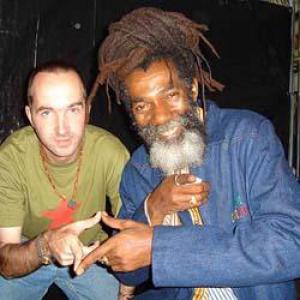 Don, it's a true honour and enjoyment to see you here again after such a long time.
Don Carlos: "Yeah man, it's a joy to be here for the people, because it's the people who really requested it you know. Even though Jah is the master and Jah set up everything, Jah people are here requesting good vibes and consciousness."

A logical thing to ask then is, where has Don Carlos been the last ten years? We've heard and seen so little of you.
Don Carlos: "Well I've been around you know, in some other parts of the world, spreading the message and ensuring that the people remember consciousness & exercise consciousness."

How and where did you get the name 'Don Carlos' and what does it mean?
Don Carlos: "It just happen you know. Originally my mom called me Carlos, but my friends gave me the name Don, so I've been carrying that name from since I was a teen."

People always refer to Black Uhuru when your name is mentioned, even though you were only part of it in the beginning. How did Black Uhuru come together?
Don Carlos: "Well, Black Uhuru was formed in the early 70's. I don't have a certain date or so, but, to my collection, it was around 1970 (it was actually in 1974, red.). Garth Dennis was a singer in the area. He grew up in Trenchtown with Bob Marley, Peter Tosh, Wailing Souls, Joe Higgs and so on and at one stage he left Trenchtown and came to Waterhouse to live and decided to pursue a musical career. Then Duckie Simpson came in the area and stayed with Garth Dennis and they started to sing together. One day Garth Dennis came to me and said: "Don, me and this bredda are forming a group and I realized it needs a third man, so are u willing to join us? I said yes and that's how things got started."

After you left Black Uhuru, you had a long time partnership with Goldie or Gold. Where did he disappear to, or what is he up to these days?
Don Carlos: "Oh, Gold got shot in the US you know, in 1998.  He got paralyzed and speech impaired."

You have a song called 'Just A Passing Glance'; is that an autobiographical song about you seeing His Imperial Majesty arriving in Jamaica?
Don Carlos: "Well it's almost like that you know, because unfortunately I didn't get to go to the airport, but I could feel the vibes all over, you know, so it was just like I was there."

Was it at a young age that you got touched by Rastafari?
Don Carlos: "Yeah, around the age of twelve I think, but really from I know I self, I have a deep emotion for people. I love people you know, but, first of all I love God. I always try to do the right thing. I read the Bible a lot and I got very involved with the righteousness and consciousness of the prophets in the Bible. So I found myself with a lot of love and sincerity for righteousness and consciousness. Knowing Rastafari even helped strengthen me and made me want to know even more."