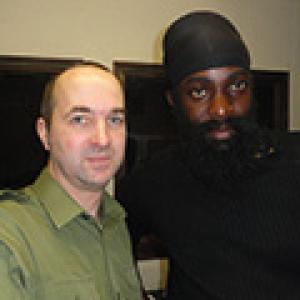 Derajah, I think I can say most reggae lovers will have gotten to know you through your liaison with the Inna De Yard project. How did you get involved in that project?
Derajah: "I've been a part of the Inna De Yard family from the very beginning, even before it became a recording project, something that happened because of my close affiliation with Earl 'Chinna' Smith and Kiddus I."

You recorded your debut album, 'Paris Is Burning', in collaboration with Donkey Jaw Bone, a band from France. Instead of you heading over to France, you had them travel to Jamaica though.
Derajah: "Well, Jamaica is a beautiful place you know! (laughs) I wanted them to soak up the vibes and relax, so once we head into the studio they could play some great music."

'Oh Yeah Ya' is a song with almost anthemic qualities. Did you sense that the moment you recorded it?
Derajah: "I didn't really have expectations for any of the songs on 'Paris Is Burning', but I still remember the fun and joy we had recording 'Oh Yeah Ya' and it's proven a great song to have the audience sing along to."

With 'Mario' and 'My Sister', 'Paris Is Burning' also features two songs that talk about the consequences of violence. Having experienced the hurt and loss that is often the aftermath of violence acts first hand, do you see that situation in your country ever changing for the better?
Derajah: "If we want to see change in Jamaica, I think it will require some kind of spiritual intervention, as I truly believe it's gotten beyond man's control. I don't think it's just a Jamaican issue either, it's more of a worldwide crisis we're facing; just look at what's been going on in the Middle East recently. Change has to start at a personal level though; if we're not ready to commit to change, we're destined to repeat our mistakes."

You grew up having a Rastafarian father and a Christian mother. Having had these two paths laid out in front of you, how did you come to choose the path of Rastafari?
Derajah: "My mother has always embraced Christianity and, even though he's never had locks, Rastafari has been my father's life mission. The Christian church is something you can hardly escape in Jamaica; one only has to look at the amount of church buildings the island counts to realize that. It's also what you're taught at school and usually either your parents or your grandparents will take you along to their church, so as a child you don't really have an option. It definitely instilled a sense of spirituality in me though, but when I learned about Rastafari, this philosophy really got a hold of me. It's a great way of life and it keeps me going, giving me the energy and inspiration I need."

These days you're performing under your birth name, Derajah, but in the early days of your career you were still known as Jah Youth, until you met the original Jah Youth aka Big Youth, that is.
Derajah: "Well, when I met Big Youth we just laughed about it to be honest, but my cousin pointed out that while there was another Jah Youth, there wasn't a second Derajah around. It's a strong name and I've come to love it more and more over time."