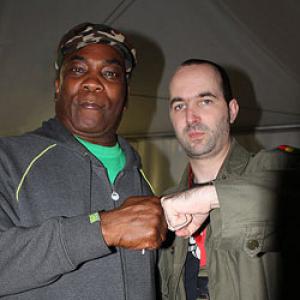 Dennis, most reggae fans will probably know your name from your days with Matumbi, but you were already involved in a couple of bands before that.
Dennis Bovell: "Yeah, there was Stonehenge, which was a rock band, and before that I played in Roadworks Ahead, a pop band. When we started Matumbi we wanted to create a British version of reggae music and that eventually developed into what's now known as loversrock."

Bevin Fagan, the lead singer of Matumbi passed away in 2008, but haven't you ever entertained the thought of getting the band back together again?
Dennis Bovell: "There were plans to do something, but as you just mentioned, Bevin unfortunately passed away. This year is the 40th anniversary of the first recording by Matumbi and to celebrate that and my four decades in the music business I'm throwing a big party in London."

You were born in Barbados but moved to London at the age of twelve. Did you have to adjust, suffer culture shock?
Dennis Bovell: "Oh, most definitely, I'd never seen snow before to give you but one example, but at the same time London was a place where I could meet people from all over the world and that really fascinated me."

You've got a longstanding relationship with Linton Kwesi Johnson, who've you been backing musically for many many years, but how did that all start?
Dennis Bovell: "Well, funnily enough, more or less the same way we are meeting now; Linton came to interview Matumbi - that must have been somewhere in the early seventies - and after the interview he told me he had been thinking of putting some of his poetry to music. I was immediately intrigued by the idea and helped him record his first album 'Dread, Beat & Blood' (Virgin, 1978, red.)."

Back in the day you were nicknamed ‘Blackbeard' for obvious reasons (Dennis had a big black beard, red.). Haven't you ever had the urge to let it grow back again?
Dennis Bovell: "No because when my beard started going silver, Linton started referring to me as 'Whitebeard', so as I didn't want to start colouring it, I decided to shave it off! (laughs)"

Why did you pick the bass as your instrument of choice?
Dennis Bovell: "I really started playing the bass after I met John K'piaye, who's the guitarist in the Dennis Bovell Dub Band now. When I met him I was still playing the guitar, but one day an old friend of mine called Dennis Harris came up to me after hearing me play and said: "Dennis you should think about starting to play bass, because you're never going to be as good as that other guy!" He was referring to John's guitar play and when I started listening to him myself, I just had to agree. (laughs) I vowed to become as good a bass player as he was a guitar player and as you know I'm still doing it today."

Are you one of these musicians who always stick to one brand of instruments or do you basically play anything they put in your hands?
Dennis Bovell: "I play just about anything they put in my hands, but the last few years I don't play the heavier types of bass anymore when I have to go on stage. I pulled a nerve in my neck a while back and I'd rather not make matters worse. At the moment, I'm playing a lightweight Yamaha."

For someone who's been in the business as long as you have and has virtually done everything there is to do in reggae music, what are the kind of things that can still get you excited?
Dennis Bovell: "I just finished working on Alpha Blondy's new album ('Vision', Wagram, 2011, red.); I mixed the album and subsequently went with him on tour as a sound engineer. Alpha's an old friend; I mixed some of his earlier albums as well, but at one point we had a bit of a disagreement and we decided to end the collaboration; until very recently, when all of a sudden he gave me a call and told me he wanted to go back to his old sound."