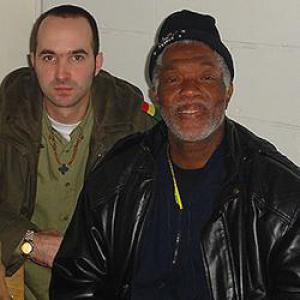 David Madden, trumpeter from Alpha Boys School, is a name that's known worldwide among reggae fanatics.
David Madden: "(surprised) Is it? Oh I didn't know that."

I guess you underestimate yourself.
David Madden: "Well, I don't realise it. I just keep going and never ever look back at what I have done. I always try to concentrate on the things I'm doing at present."

As I just mentioned, you started out in Alpha Boys School, which now, after so many years, has become legendary in Jamaican musical history, but how did you end up there?
David Madden: "Well, I went there because my mother put me there to board. She was in close contact with the nuns there and after our house got badly damaged after a storm my mother was unable to take decent care of me and my sister. I got in there, decided to learn how to play music and the rest is history."

One person at the Alpha Boys School that put a lot of her time, energy and effort in the music department was the late Sister Ignatius. Did you still know her?
David Madden: "Yes man! She did what she could do that is true, but I spent a lot more time with the bandmasters like Mr. Lennie Hibbert when I was there. Sister Ignatius was there as a person in charge so to speak, but Lennie Hibbert and before him Mr. Delgado (Reuben Delgado, red.) were much more important. Personally I got taught by people like Johnny Moore and Jo Jo Bennett. They were my true mentors."

Did you know you wanted to play the trumpet right from the start?
David Madden: "Yes, it was always the trumpet for me. When our house got damaged in the storm of 1951, I remember a band playing at a carnival. I must have been only 3 or 4 years old. The band had a trumpet player and even though I didn't even know what that instrument was, I liked it a lot. Then when I went to Alpha, I heard music and recognised the same instrument. When they asked me if I wanted to join the band and asked me what instrument I wanted to play, I just pointed and said: "That one there!" It took me about two weeks to get a sound out of it that first time and when it did come out it sounded worse than a cow in a pasture! (laughs) After twenty years people then start telling you you sound alright and after thirty years that you sound great. I know I didn't have any inborn God-given talent in me; I had to work at it. Then the whole changes in the music business, with the appearance of the synthesizer and all that, forced me to re-think what I was doing and basically ensure my survival, so I started to do vocals. I had done a lot of work at Coxsone's, around 1968 and '69, playing on Bob Andy's first record 'I Got To Go Back Home', on Burning Spear's first record 'Door Peep' and having had my own hit record called 'Money Maker' which I did together with my brother from Alpha, Cedric Brooks. The names that I worked with are countless, from Gregory Isaacs over Bob Marley & The Wailers to Alpha Blondy, but I noticed that with all my experience I was never called upon to do a show by myself. It was always the singers that were in the spotlights. It gave me a feeling of having been there but not have been noticed. From about 1970, I then joined Zap Pow. That went on for about ten or eleven years and we had several big hits, songs like 'Mystic Mood', 'This Is Reggae Music', 'Scandal Corner', 'Sweet Loving Love' and even today there's a song by Zap Pow that has resurfaced. There's a singer by the name of Collie Buddz, who has re-used the riddim of a track of ours called 'Last War'. That tune was also featured on the best of compilation VP Records did for Beres Hammond. It was actually me who gave it to them to put on there. This tune apparently roused a lot of curiosity, because since then they've asked me to put together a compilation album of Zap Pow tunes for them."

It's a fact that there are very few Zap Pow albums on the market right now.
David Madden: "Right, there's nothing! Zap Pow has not been together as a band since 1981. Since then we've been doing our thing as individuals, but I believe that if there was a cause for us to come back together, it could happen. This upcoming compilation and the Collie Buddz tune might be the spark we needed. I just put the finishing touches on the compilation a few weeks back. We've included the six songs that we did on the album we did for Island Records that was simply called 'Zap Pow' and added some other tracks we did and some new material to top it off."

If you do get back together, one key member will be missing though. I'm talking about Mikey Zappow off course. How do you remember him and what kind of person was he?
David Madden: "Mikey was a great guy and Zap Pow was his life. His life was also filled with frustration though. He did all this great things, he was in Zap Pow and even wrote a successful book called "Reggae Report", but never got to reap the fruits of his labour. It was just an unfortunate thing."

You played with all those artists over the years, but if I were to ask you today to play one of those tunes, could you do it immediately or would you have to study that tune again for a while?
David Madden: "(laughs) No, I can do it straight away. I've never stopped playing and am still doing the same thing I did when I started. Vocally I'm still only starting out though, because I only started doing that about ten years ago. It was more or less the same story as when I learned to play the trumpet; again I'm no great God-given talent as a singer, but I'm working on it and I hope to achieve a certain level before I die. I've started my own group now called David Madden's Cybernetics."

Are there any tunes that you prefer playing, that give you more satisfaction than other ones?
David Madden: "No, not really. If I would be playing my own shows, I would probably be able to answer that question, but as long as I'm just backing other artists, it don't really matter to me. My most interesting time is when I can just pick up my instrument and practise, because then I am totally free to do my own thing. I try to maintain the level that I have achieved and sometimes try to delve into something more difficult still just to test myself."

Do you pass on your skills, do you teach at all?
David Madden: "Yes, there were two or three guys that came to me. One is finished now and works as a teacher. He learned to play all kinds of instruments, but his main one was the trumpet. I've always seen myself as a bit of teacher anyway though, because when young people see me perform on a stage, they might get inspired and some of it might rub off on them."

Generally speaking, do you think there's still enough interest among the young people in Jamaica to learn how to play an instrument?
David Madden: "(categorically) No! It has all gone. The art form has lost out to economics. It's more a survival thing now.  Anyone who gets into music today does so because they want to earn money. When you learn how to play an instrument, no way will it earn you a living when you start out, so no one wants to spend five years or more on something anymore without even being sure it will earn him or her something in the end. It's far easier for them just to grab a microphone and do something on a riddim track."