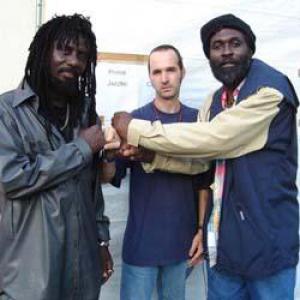 Cornel, you're one of a few Jamaican singers with a wonderful falsetto voice. Does a voice like that need constant training or special treatment?
Cornel Campbell: "No, I never trained my voice. It was one of the only things I got from Jehovah God, who inspired me and showed me I could sing."

Your nickname is 'Don Gorgon', what's the full story there?
Cornel Campbell: "Everybody said I behaved like a don, so I invented the name Don Campbell. After that, you had a lot of dons who came up, like Don Carlos or Leroy Smart who called himself 'The Don' too, but I was the original one. Eventually I changed back to my real name which is Cornel Campbell."

And what about the Gorgon part?
Cornel Campbell: "Oh, the Gorgon, well that was because there was so much competition going on in that time. I had a song ('Gorgon At The Ginesos' aka 'Gorgon At The Ginegog', Bunny Lee prod. 1975, red.), which went (sings): "If you're born to be on the right track, then don't fight against the ginegog..." Then Bob Marley used that word in his song ('Rat Race' from the 'Rastaman Vibration' album, red.) and he added gorgon to it: "Some a gorgon, some a hooligan, some a ginegog". I never answered him, because I knew I was the original gorgon. Even Ninjaman says he's the gorgon now and people even accept it. I don't understand that. It's like the Jamaican people are losing their cultural heritage. I can tell you though the original still stands! Cornell Campbell, live and direct!"

You really started out in the business at a very young age.
Cornel Campbell: "(decidedly) 1956! I was eleven years old when I went to Sir Coxsone's Downbeat. That was still at the time when ska was making its debut in Jamaican music. I helped to originate that sound. I did a tune called 'Rosabell' at a time when The Skatalites weren't even called The Skatalites. I worked with all of them: Don Drummond, Ronald Alphonso, Tommy McCook, Lloyd Knibb. After that tune everybody followed, people like Derrick Morgan and all that, but they never gave me any credit."

How do you remember those first years working with Coxsone Dodd?
Cornel Campbell: "It was intriguing and exciting. I was a little boy, coming into a recording studio for the first time. Hearing your own voice on a record is surprising. I admire Coxsone. Even though he was unscrupulous with me, he did his job. When you had the ability, Coxsone was the man to get it out of you. The payoff wasn't too good though (laughs), but at least he built my name. I knew Coxsone very well and he was a worker, a workaholic really; he worked day and night! It was a good experience and I regret none of it... only that I never got paid."

From Studio 1 you moved on to Bunny Lee...
Cornel Campbell: "I never really moved on as such. When I was still at Studio 1, I also did some recording for King Edward's. The thing is, the recording business back then wasn't really honest. A lot of producers recorded you but never even bothered to put your name on the record. That way they could profit from the copyrights themselves. I wrote most of my tunes myself - I'm a good songwriter - but what Bunny Lee and Coxsone used to do was make some deals overseas and ship those records out with their own name on them. When I recorded 'Queen Of The Minstrel', Coxsone wasn't even in the studio, but never the less he managed to get the rights to that riddim I composed."

A number of artists like Burning Spear and Ijahman Levi have been working hard over the past years to get back the rights to their songs. Is that something you are doing or trying also?
Cornel Campbell: "I wish I could, but it almost seems an impossible task. Even suing them would go too far because there are so many of them. I just wouldn't know where to start."

At which stage did you start dreading up?
Cornel Campbell: "In 1975, when Bob Marley did 'Catch A Fire' and the European people started to catch on with the whole dreadlocks thing. I started to look at myself and asked: "Well if God created man and wanted him to cut his hair, he wouldn't have made it grow no?" From that time I let my locks grow wild. Jehovah God is a natural thing. That's the only thing I deal with."

You just mentioned your most famous tune yourself just there, I'm talking about 'Queen Of The Minstrel' of course, a tune that was covered by so many artists over the years. How did it come about?
Cornel Campbell: "(dodges the question) Most artists and deejays in Jamaica today lack respect for their elders. They just stumble on your riddim and use it. Everybody from Sizzla over Beres Hammond to Sugar Minott have used that riddim, but no one even bothered to come up to me and say: "Boy Cornell, thank you!". It's all a rat race you know, but as long as I'm alive, with the help of Jah I will keep working!"