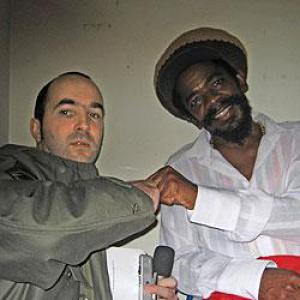 Cocoa, my first question concerns your stage name Cocoa Tea. Looking for an explanation I noticed opinions seemed to differ about the meaning of that name. Some sources claim it to be Jamaican slang for "chocolate milk" and other claimed it to be a tea brewed of a cocoanut extract.
Cocoa Tea: "It's a drink that's made of chocolate and the plant that brings forth chocolate is the cocoa tree. That brew we call cocoa tea in Jamaica."

Well, now we've got it on record, there can be no more doubt. How did you come by that name?
Cocoa Tea: "One day, when my mother said she didn't feel like cooking food and was only going to make some tea, I replied: "Yes! Make me some hot cocoa tea!" After that my brothers and sisters and the other kids from the neighbourhood started to call me Cocoa Tea. At first I didn't like it at all, but as it goes, once you get a nickname that vexes you it will definitely stick."

Before you decided on a musical career, you worked for a time as a jockey riding horses.
Cocoa Tea: "(laughs) I wasn't really in the races, but I was an apprentice and I helped to train them. I still love horses a lot."

Do you still ride?
Cocoa Tea: "From time to time yes and I still own a couple of horses too."

And what about waging a little bet once in a while? I hear that's very popular in Jamaica.
Cocoa Tea: "No, I don't really do that. It's very popular but I don't really have the time for it. Just every once in a while I might fill in a Pick 6 (type of wager offered by horse racing tracks that requires betters to select the winners of six consecutive races, red.) or Pick 9, but I'm not really a gambling person. I breed and own horses, so whenever one of my horses wins I collect a breeders fee."

If we look back at the path your career followed, the names of three top producers automatically pop up. You started out working with Junjo Lawes, moved on to King Jammy and eventually ended up with Fatis Burrell of Xterminator Records.
Cocoa Tea: "Yeah man! Well as you say, Junjo was the first producer I started off with, but when he moved to the States, I began collaborating with King Jammy. Eventually I went on to work with Fatis but also with people like Gussie Clarke and Bobby Digital. The three you mention are special to me because they had a special touch or vision where music is concerned. They simply knew when a record was going to hit."

Personally I always found that when you teamed up with Fatis, your music became a lot more conscious.
Cocoa Tea: "Yeah, that time we took it to another level. The more you grow and the more experienced you get, the more you start to focus. When I linked up with Fatis, I wanted to make music that would live on. You saw the people react here tonight, so you saw how these songs still move them even if they've been around for some time now."

Where does Rastafari fit into your life? How important is it?
Cocoa Tea: "It means more than anything else in this world, because without Rastafari I probably would have been a gunman. Because of the powers of the Most High and the outspiration that I got from his words of righteousness, it has been the most valuable thing in my life. I wouldn't want to live any other way anymore; I just want to be a Rasta! When you know about consciousness, you know about bringing people together in love and harmony. That's what Rasta is all about: teaching people how to love each other. If you look at the world today, it's all bag-a-war and crime and I don't really want to get mixed up in that. It's the greatest thing that ever happened to me!"

The Ethiopian calendar is different from the one we use...
Cocoa Tea: "Yeah man, they just had the millennium!"

Does that hold a special meaning to you as a Rastafarian?
Cocoa Tea: "Yes, it's a special year. That's why I did a song called 'Africa' on my latest album. In that song I'm trying to find out where we've come from and where we're going. Just the other day they killed Lucky Dube in South Africa, so we have to ask ourselves if Africa is not going backward instead of forward. If things like this can still go on in this new millennium, something is definitely wrong. I wrote the song before Lucky got shot, but now it's as if I was foreseeing things to come. One verse in the song goes as follows: "I man want to know what is wrong. Why are they still fighting in Sudan? Me hear disease kill them and them a kill themselves, someone is going to take over their wealth.""

How did that project come together?
Cocoa Tea: "Brotherman (Andreas Christopherson from Minor7flat5 records, red.) came to I-man gates and the first tune that I sang for him was a song called 'The Man From Spain' which went: "The man from Spain, Christopher Come-Rob-Us was his name!" (laughs) He was not in the studio when I recorded it, but when it was finished I told my family: "Boy, if Brotherman comes and him says him no like this song, I will never do another one for him again!" Luckily he came by and truly loved it. That's when I felt the vibes were right. Even tough he is a white man, I could feel where he was coming from, because I know that right now there are a lot of white men who are more conscious than some black men, so colours don't matter."

Looking back it seems you kind of prophesised things to come when you did tunes like 'No Blood For Oil' and 'Oil Thing', talking about an issue that's hotter than ever today.
Cocoa Tea: "Yeah man, in a lot of my tunes it's like I'm foreseeing things to come. I was blessed with the gift of being able to see what is going to happen in the future. Just look back in a few years and you will see that nuff things I wrote about in this album will have come to pass. It's not a hard thing to do; all you have to do is hail up His Majesty and he will open your eyes and give you the knowledge and overstanding to see what is going to happen."

When you started out you were considered a dancehall artist, but how do you regard that scene nowadays? Do you still fit in?
Cocoa Tea: "I'm an original dancehall artist, yeah man! All the dancehall artists you see today came after I&I. What they call dancehall now is just a lot of people jumping up and down and making noise! Most of the dancehall tunes today don't really last long, but the dancehall tunes I did, songs like 'Tune In' or 'Love Me' which I did with Shabba Ranks, still live on! That's why I have a show in Jamaica the 23rd of December called Original Dancehall Jam Jam. Why? Because I wanted to showcase to the people what the original dancehall was and where it came from. We've got people like Sky Juice, Metromedia Sound, Bodyguard and Stone Love - the original sounds you know - and then we invite people like U Roy, Gregory Isaacs, John Holt, Admiral Bailey, Josey Wales, Yellowman and so on."

How long have you been doing that now?
Cocoa Tea: "Five years. This edition will be the fifth anniversary. It's to highlight to the younger generation what it was like in those days when artists just passed by in the dancehall and grabbed the microphone. It's not like that anymore. In the early dancehall, a man would rub against a woman and not a breeze could pas between them till daylight! These days the men are often dancing on one side and the woman on the other."

To end this interview, do you have anything you want to pass on to your fans here in Belgium?
Cocoa Tea: "My message for I&I fans is that the world is in a mess right now. Ever since the 9-11-incident, the world hasn't been the same. They lock off the borders and so on. That's why I say (starts singing): "Since 9-11 them a lock off the border, them scan your face and x-ray your finger. Can't pass through if you ever got a ticket and if you have the ganja please forget it! So blood & fire me a burn and they wanna carry me to the station fi lock mi down. Them put a bridle over mi face and a bit on my tongue, but me still burn the wicked them down. Cause I-man say them in the new world order, how the fxxx them come on so..." (laughs) Blessed love, Rastafari!"