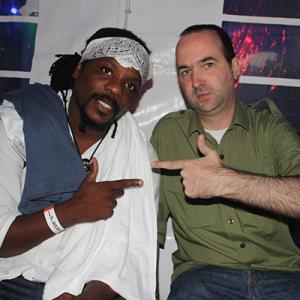 Chuck, you were born in the US and spent some time there as a youth as well; do you think that changed your approach to music in any way?
Chuck Fenda: "No, not really. Even though I was born in New York, I already moved to Jamaica when I was only six weeks old and until I graduated from high school I had spent my entire life over there. After my high school graduation I returned to the US for a while and that's where I developed my musical talent. I can only see those years I spent over there as a plus, especially with visa situation becoming more and more difficult for Jamaican artists."

In the first tunes you recorded for King Jammy, you still had this rude boy thing going, but then everything changed with 'I Swear'…
Chuck Fenda: "Looking back on it now, I can only consider it to be the fulfillment of prophecy! The Almighty came to me and turned me towards a message of righteousness. A lot of my friends had died from gun related injuries, so it was also what I was experiencing all around me that steered me into a different direction. Coming from a community filled with poverty and desperation I felt it was my duty to show them there was also another way."

Was it also that spiritual awakening that steered you towards 5th Element?
Chuck Fenda: "To me joining 5th Element was like going back to school; they put so much time and energy in my career that I'm not afraid to say they molded me into the artist I am today! Going from King Jammy to 5th Element was like a learning curve to me; it's where I truly got to know Rastafari and Richie Spice, Natural Black, Anthony Cruz and myself, we really formed a family for a while. I think I can say that with 5th Element we were part of bringing back conscious music to the forefront in Jamaica."

When you released 'Gash Dem' back in 2006, the tune was subsequently banned from the radio in Jamaica. Did you see that coming in any way when you wrote and recorded the song?
Chuck Fenda: "Not really; to me it just showed the politics going on in the Jamaican music business. The song was directed against child molesters and rapists, how you can be against a song condemning those actions? I'm still waiting for anyone to show me where I'm saying anything bad or wrong in that song. The lyric goes: "…but when God hol yuh, nuh if nor nuh but nuh badda tell de almighty bout maybe, gash dem and light dem for all the negative vibes weh dem a bring…". I'm not talking about going out there and setting someone on fire, I'm stating that if you commit those kinds of atrocities you should definitely fear God's fire! The ban really upset me, but in the end it only made the song more popular."

You reacted by releasing another tune called 'Freedom Of Speech'.
Chuck Fenda: "Yeah, that song expressed what I was feeling after 'Gash Dem' was banned. Free expression should be a basic human right!"

When and how did you earn your nickname 'The Living Fire'?
Chuck Fenda: "People just started calling me by that name because of my no nonsense attitude. I'm also known as the 'Poor People Defender' as I keep speaking up for the voiceless and underprivileged."

You're known for giving back to the community, but you're never boastful about it.
Chuck Fenda: "I'm not the kind of guy who likes to get the media involved to prove what a great benefactor I am; I just do little things left and right just because I feel in my heart it's the right thing to do. Jah has been good to me, so now it's time for me to give back and do my part and I can just as well do that without any publicity!"