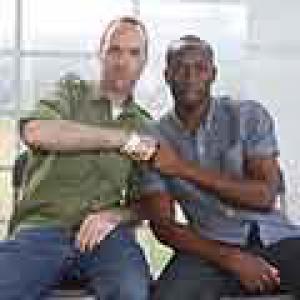 Christopher, for starters can I just say you really resemble your father!
Christopher Ellis: "(laughs) I know, everybody keeps telling me that, so it has to be true!"

As the son of the great late Alton Ellis, you were raised surrounded by music. So much so even, that you had your first stage experience at the tender age of eleven years old.
Christopher Ellis: "Yeah, that's absolutely right. It was at a big show starring artists like Ken Boothe, John Holt, Delroy Wilson and of course my dad, Alton Ellis. I remember I sung 'I'm Still In Love' and from that moment I knew I also wanted to become a singer like my father was."

I found a quote of yours where you stated that were your father still alive today, you wouldn't necessarily be pursuing a solo career as you would content yourself with accompanying him on stage. Do you still feel like that?
Christopher Ellis: "I think so, yes. I enjoyed singing at his side so much; that was my joy in life. I don't know if people would have been interested in little Christopher Ellis were my father, the musical legend he was, still alive. It's not easy to step out of the shadow of a man with Alton's stature. Of course now he's left us, it's up to me to carry on his legacy."

I can imagine that in many ways being able to carry on his legacy is a blessing, but can it also be a curse at times?
Christopher Ellis: "I wouldn't necessarily say a curse but… Damian Marley for example, has successfully stepped out of his father's shadow, and that's also what I want to aspire to do. I'm trying to focus on doing original Christopher Ellis material now, instead of doing versions of my father's songs, and I believe that approach is working."

After your father's passing you travelled to Jamaica to come to terms with your loss and to find yourself again, but you also teamed up with another legend in reggae music, Sugar Minott.
Christopher Ellis: "First and foremost he showed me love. When my father passed away, he invited me to come over and record in his studio and he taught me many things. Even though the time we spent together didn't actually produce any recordings, I still feel I learned a lot in the time we spent together. Sugar and his family will be in my heart forever!"

Soon after you hooked up with Sugar Minott, you also started collaborating with Stephen Marley and later also with his brother Damian.
Christopher Ellis: "After spending some time with Sugar Minott, I got an invite from Beres Hammond to come and check him at his studio, but even though I went there twice, I always seemed to be calling when he was out. Someone suggested we go check out Tuff Gong instead and that's what we did. I met Stephen at Hope Road and already the next day we recorded a tune together called 'End Of Time' which also feature Jah Cure. He then invited me to come visit him at his house in Miami to do some more recording together and basically he's been like a big brother ever since."

It was his brother Damian who produced your debut 'Better Than Love' EP. Are those the type of songs your most comfortable with?
Christopher Ellis: "I also did tunes like 'End Of Time' or 'Don't Change Your Number', which are quite different from the songs on the EP. I definitely don't want to be pinned down to the rocksteady genre as I want to keep experimenting with one drop and dancehall as well."

You continuously travel back and forth between the UK, Jamaica and the US. Where do you feel most at home?
Christopher Ellis: "Well my family is in London and that's still where I feel I'm based, but as you say these days I'm spending a lot of time in Jamaica and the US as well. Fortunately thanks to the internet and applications like Skype it's easy to stay in contact with the home front."

Most people will remember your father for the excellent musician he was, but is that also what you, as his son, remember him as?
Christopher Ellis: "I will always remember how he used to save me from my mom, whenever she wanted to give me a slap. He was a very loving person and a very funny man as well. Most people won't know this, but my dad could be quite the comedian if he wanted to. I still miss him a lot, but being able to carry on his legacy on stage is very fulfilling."