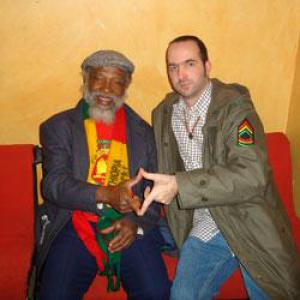 Cedric, you've always had a kind of on-off relationship with The Skatalites, how and when did that story start?
Cedric 'Im' Brooks: "It started after Roland Alphonso (Roland Alphonso aka. The Chief Musician, January 12, 1931 - November 20, 1998, was a Jamaican tenor saxophonist and founding member of The Studio One Orchestra - which later became The Skatalites - and The Soul Brothers which became The Soul Vendors, red.) passed away. The remaining Skatalites then asked me to step up and take his place. I stayed with them for some time, but my desire to go to Ethiopia was too great, so I left. Unfortunately I had to cut my journey to Ethiopia short when I fell ill. Originally I had planned to stay there several years to study the culture and religion, but it wasn't to be. After I recovered I was able to take up my place in the band once again and on and off I still play with them today."

Did you start out as a saxophonist from the very beginning?
Cedric 'Im' Brooks: "Actually I started as a clarinet player. I played that instrument when I was still with the Jamaica Military Band, but at one stage I was invited by a group of youngsters that had just formed a band called The Vagabonds to join in and write them some music and that's also when I took up the saxophone."

You were never a musician that went strictly ska or strictly reggae, you're really best known for the albums you did with Light Of Saba. When you started on these albums, what was your goal, what did you want to achieve sound-wise?
Cedric 'Im' Brooks: "I started working on Light Of Saba, when I returned from the States where I got influenced by the work of Sun Ra (born Herman Poole Blount, Sun Ra was a jazz composer, bandleader, piano and synthesizer player, poet and philosopher known for his "cosmic philosophy", musical compositions and performances. Claiming that he was of the "Angel Race" and not from Earth, but from Saturn, Sun Ra developed a complex persona of "cosmic" philosophies and lyrical poetry that made him a pioneer of afrofuturism as he preached awareness and peace above all, red.) and his attempts to reconstruct African rhythms. It inspired me to return to Jamaica to go in search of my own cultural roots. I started out by exploring things like mento and calypso and gradually tried to link that music with the traditional sounds from Africa."

You're one of the few Rastafarians who've actually made the journey to Ethiopia and even had the chance to stay in the country for a while. What impression did that journey leave you with?
Cedric 'Im' Brooks: "Well, I was fortunate enough to be able to go to Ethiopia on a scholarship to study theology. I really wanted to study the Ethiopian culture and wherever you look in that country the church is present in one way or the other, so it was a logical place to start. I had the chance to stay there for about two years. Originally I had planned to stay longer, but as I already told you I had to cut my stay short when I fell ill. However, I did get the chance to visit a number of the most important historical sites, places like the holy city of Lalibela for example. On the whole it was a great experience and I would still like to return there."

Did you pick up something of the language as well?
Cedric 'Im' Brooks: "You're more or less obliged to learn the language, because almost everything is written in Amharic especially where liturgy is concerned."

And, what about musical influences; the music of Ethiopia is really different from the music in the rest of Africa?
Cedric 'Im' Brooks: "Actually that's one of the things I still want to do when I return. I want to study the ethnomusicology of the country, because, as you say, the Ethiopian music culture is really distinct."

As a saxophonist, do you treasure your instruments as long as you can or do you switch saxophones quite regularly?
Cedric 'Im' Brooks: "The sax that I'm playing at the moment is quite new, but usually I try to hold on to my instruments. What happened is that I passed my old sax on to my son, who's playing it now."

Do you know that instrument is actually a Belgian invention?
Cedric 'Im' Brooks: "Yes, I believe it was created by a man called Adolphe Sax right?"

Right, he was from a city called Dinant in the south of the country. A last question then: You're known as Cedric 'Im' Brooks, what does that 'Im' stand for?
Cedric 'Im' Brooks: "(smiles) Not of myself, but of Him who sent me."

Cedric, thanks for doing this. Rastafari!
Cedric 'Im' Brooks: "It was my pleasure. Haile ites!"