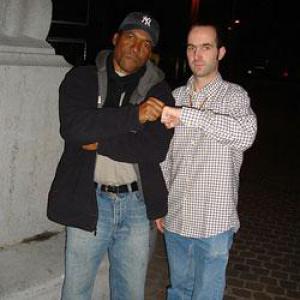 Carlton, how did you hook up with the guys from Civalizee (Civalizee Foundation, well-known soundsystem posse from Antwerp, red.)?
Carlton Livingston: "That started last year. I was in France and there we touched base. It just developed into a friendship after. This year they said they wanted to do some things together, so I just came over."

Let's go back to the beginning. One of your direct influences as a singer was Bob Marley.
Carlton Livingston: "Yeah, that story started when I started going to the Trenchtown Comprehensive High school. A brother of mine called Doyley, also known as Knowledge (Anthony 'Knowledge' Doyley, lead singer of Knowledge, red.), who now lives in England, took me to third street one day and there we watched Bob rehearse. That session really inspired me."

Apart from Bob, who would you say were you earliest influences vocally?
Carlton Livingston: "Curtis Mayfield, Sam Cooke and when we come back to Jamaica there was Slim Smith, the greatest singer ever to come out of Jamaica!"

One of the earliest things you did was for a sound system together with Lone Ranger (Fantastic Tree which later evolved into Soul Express, red.), but surprisingly enough with you as the deejay and Ranger as the singer.
Carlton Livingston: "(laughs) At that time he wanted to be a singer and I wanted to be a deejay, but after a while we realised that he had more charisma to become a deejay and I was pretty laidback and my voice was better suited to be a singer. I don't have a very strong voice or a high range, so I had to resort back to singing, which I suppose I was meant to do anyway."

How did you and Lone Ranger meet?
Carlton Livingston: "We just happened to run into one another at a dance of the Fantastic Tree soundsystem in Franklin Town in east Kingston. From the first day we met, there was a good vibe between us and we've stayed friends to this day."

You recorded countless tunes for Studio 1, but only few were released. What was the reason there?
Carlton Livingston: "That's a good question... I wish I could answer it. The only theory I can come up with is that most of the tracks I recorded for Studio 1 were unusual. It wasn't your everyday stuff. So maybe Coxsone felt those tracks didn't have enough hit potential, but I also recorded tracks like '100 Weight Of Collie Weed', 'Trodding' and 'Marie' for them and those tracks at least deserve to be re-released, but what am I going to do about it you know."

What do you remember about those days? Today Studio 1 has an almost legendary ring to it, so, from the horse's mouth let's say, what was it like working there with Sir Coxsone?
Carlton Livingston: "When I first went to Studio 1, I was a bit intimidated because of mister Dodd, but after the first couple of tunes everything just worked out and after some time we more or less became friends because we used to hang out together a lot. When you got to know him he was a man who made you laugh a lot and a really cool person."

You were also working with him on a new album just before he passed away. Is that album still going to see the light now?
Carlton Livingston: "Well, I spoke about it to Mrs. Dodd a couple of times and she told me it was going to be released. Honestly, I'm not holding my breath on it. If they choose to do it, so be it, but in the mean time I just keep working."

Your most famous album, in my opinion anyway, is the 'Rumours' album. It was re-released a couple of years ago on the French Tabou1 label, but in the mean time that label has also gone bankrupt so once again it has become a sought-after collector's item. Do you have any plans yourself to re-release that album and the 'Soweto' album too?
Carlton Livingston: "The 'Soweto' album definitely, because a lot of people keep asking me about that one. What I'm planning to do is to release the vocal tracks together with the riddim tracks on one disc. So as soon as I can get my hands on the riddim tracks I will do it, maybe as a double album or something like that."

I don't know if you consider yourself to be a Rastafarian, but in any case you did a number of tracks ('Don't Cuss Rasta', 'Rasta Get The Blame', 'Call Of The Rasta', red.) about Rastafari. How big of an influence would you say Rastafari has been for you?
Carlton Livingston: "I would say pretty big, because I used to hang around with a lot of Rasta youths from House of Dread in Franklin Town. It was at the same time when Bob Marley also used to come there. Bunny Wailer passed by too and I was influenced most by Gilly (Antonio 'Gilly' Gilbert, close friend and tour chef of Bob Marley, red.) who used to cook for Bob. I used to know Gilly from school and I used to go up there to play soccer. In those days you had what they called Soul youths and Rasta youths, but I was more of a middle of the road youth so to speak. I was never really a Rastafarian. I smoked the chalice and I ate ital, but I never really had dreadlocks."

Like so many other Jamaicans, at one stage you migrated to the United States. What prompted that move?
Carlton Livingston: "Family really, but in the end, as my good friend Lone Ranger always says: "Everything works out for a purpose.", because if I had stayed in Jamaica my career wouldn't have worked out the way it did. Who shall say, we'll never know. The couple of years I spent in America worked out fine for me."

I've seen you perform with a live band, but I presume you do sound system sets as well. Were does your preference lie and is there a big difference for you as a singer?
Carlton Livingston: "Playing with a band is a totally different experience than playing with a soundsystem. When you have to sing to a record, everything is very straightforward unless the record is scratched or something. With a band things can fluctuate, you definitely have to rehearse or things won't work. If we take the show I did here with Calabash for instance; these youths really had it down, so nuff respect to them!"

One last question then; obviously the roots vibe is still going strong over here in Europe, but how is that in Jamaica? Do people still know who Carlton Livingston is over there?
Carlton Livingston: "(laughs) No! I still pop over there once every now and then to hang out with my friends, but I don't do any shows there anymore. By choice I should add, because the right opportunity hasn't come along just yet. Right now I just enjoy coming over to Europe every year, because the vibe over here is totally different."