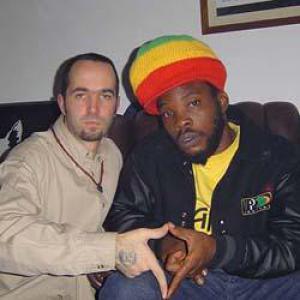 When one first hears Bushman's voice, it's easy to confound it with that of Luciano, but simply labelling him a copy of The Messenger, would be doing him short.

Bushman, you just finished your show here at Petrol club. Satisfied?
Bushman: "Yeah man! The vibes were overwhelming. I could see that the people really came to listen and sing some songs with me, because, really, I could see a lot of the people in the crowd singing along with my songs. It's good to know that the people are really listening to this conscious music and I do give thanks for that."

How did you discover your talent, your voice?
Bushman: "As I always answer when this question is being asked, it was in church. I think one of the reasons why most artists coming out of Jamaica can relate to the church is because Jamaica has the most churches per square mile. That is even in the Guinness Book of Records! Church had a big influence on I&I as a youth; singing in the church choir, in Sunday school choir and so on. After nurturing my voice like that, I discovered that I wanted more then what church could offer me in that way. So when hurricane Gilbert hit Jamaica, which was in 1988, schools got so smashed up, that I went to hang out at the dancehall more and more. Then I tried to select a sound, because at first you have to try to make a start somewhere. After that I started doing dub plates and the rest is history."

On your albums we hardly find any duets, is that a conscious choice or didn't the opportunity present itself yet?
Bushman: "I try to link up with artist such as Capleton, Sizzla and Luciano all the time. Luciano was actually at my first show and I called him up on stage and it was very nice. I'm trying to link up with him to do a combination, but every time it seems we are in different places. Maybe it's because I don't live in the city. I prefer to live in the country and that keeps me a little bit from linking up with other artists."

The whole dancehall scene has been in the spotlight lately with a lot of negative publicity; in the US and the UK with Outrage protesting the anti-gay lyrics some of the singers preach and in Jamaica with protests by some of the big sponsors against the incitement to violence in a lot of the songs. As a Rastafarian singer what is your view on this whole topic?
Bushman: "There are a lot of ways to speak about certain topics even without literally saying it. Where I am concerned, any publicity, whether good or bad, is still publicity. I just stay on the positive side because I have better things to talk about and better things to do. I just stay positive and send out conscious songs and vibes. It's not my prerogative, it's their problem."

What does being a Rastafarian mean to you?
Bushman: "Reading historical literature, scrolls and scriptures, research and so on, brought me to self-realisation and finding my purpose in life, which is Rastafari. Rastafari is more like a track you're on, a way of life. Many say it is a religion, but it is higher than religion, it is definitely a way of life. When I see myself and I see how life is set, I know that the Rastafarian way of life is a natural way of life; the Nazarene who does not comb nor shave his hair. To I&I cutting off or shaving your beard or your hair is like fighting against nature in its infinite glory. Every time you cut it, it grows back, so that simply means it's there to grow. I know in these times people look doubtful when they see a man with a long beard. Or take for example girls with hair on their legs, in Jamaica the women don't shave their legs, but in many other countries when a woman does not shave her legs people will scorn her, look down on her. To I&I and my philosophy it's all nature and there are many other things like that, like for example food. The ital lifestyle of a rastaman, which I uphold, to my opinion gives you longer life. It lessens your vulnerability to diabetes, bad blood circulation, arthritis and so on. So Rastafari is really a way of life, a research into where I'm from, where I'm at and where I am to go."

As a Rastafarian how do you view Ethiopia then?
Bushman: "Ethiopia awaits its creator. King Solomon and the Queen of Sheba, that's where it all started. The Queen of Sheba was from Ethiopia, King Solomon was an Israelite. Now when the Queen of Sheba went to see King Solomon to find out what made this king so great, she actually fell in love with him. They got together and Menelik 1 was born. He was the one who transferred the Arc of the Covenant to Ethiopia. It is said: "The sceptre shall never depart from Judah, nor a lawgiver from between his feet." (Genesis 49, red.) I know you will have heard of the Twelve Tribes of Israel, with April being the first month in the calendar with Ruben being the firstborn, then Simeon, Levi and so on. Emperor Haile Selassie was from the Tribe of Judah as he was born on the 23rd of July. He was crowned King of kings, Lord of lords, Conquering Lion of the Tribe of Judah, Elect of God, Light of the World, on the 2nd of November 1930. We see him as the way to the Light, the Highest. Marcus Garvey also said: "Look to the east for the coming of a black king."  Ethiopia to I&I is like the motherland which awaits I&I, it's like heaven. We need to go back to Africa and rebuild it."

As a final question, in these "serious times" as brother Luciano put it, do you have any message that you want to convey to the youths reading this interview?
Bushman: "Well we, the parents, guardians and world leaders, need to ask ourselves where we are guiding the youths, with things that are being shown on television, that are not suited for the youths, but which they see it anyway, or with some music that is played on the radio over and over again. With those kinds of influences we must ask ourselves what is going to become of the next generation. We can say to them: "stay focused and stay strong", but they will still watch television and listen to the radio, so how much can our words curb them? We can only hope and pray and be strong and know that good will overcome evil every time. Blessed love!"