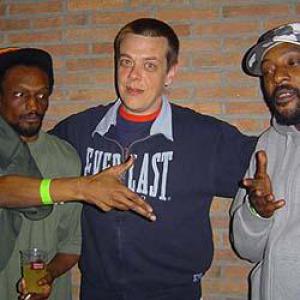 Bush Chemists consists of a whole lot of people. Could you guys introduce yourselves and say what you do in the band?
Dougie Wardrop: "I'm Dougie (Wardrop, red.), and I do the mixing on stage and produce records."
Culture Freeman: "Culture Freeman, chanter"
Kenny Knots: "Kenny Knots, singer and chanter, Rastafari!"

Bush Chemists is most famous for playing what is known as dub steppers or UK dub. For those who are not familiar with those terms, could you describe what defines dub steppers?
Doug Wardrop: "Good question! (laughs) What is dub steppers? It's a style of reggae that was kind of invented in England, I suppose. It's our take on the steppers tunes from the seventies, really. We kind of emulated those tunes, added sequencers and drum machines and so on."

As the name suggests, the steppers scene is mainly an English thing. How has the scene evolved on the continent? Has it grown in popularity?
Dougie Wardrop: "On the continent, France is the best place for steppers fans. To me it's just reggae. I don't like it when it's called UK this or UK that. I don't like tags."

You mention those stepper tunes from the seventies and early eighties. Can you put some names to that? Who were you influenced by?
Dougie Wardrop: "People like King Tubby, Scientist, Lee Perry, all the "usual suspects" really! (laughs) Channel One too, and Jah Shaka."

The name Jah Shaka pops up a lot indeed when you read up on Bush Chemists. What does he represent to you guys?
Doug Wardrop: "Shaka is like the granddad of dub music in England, the godfather. His sound started playing dub steppers even in the eighties when people weren't into steppers anymore. Then in the nineties another audience went out to see him play, mainly white people, and it started to get popular again. You had the whole crusty scene, for example. Shaka was and basically is the top sound in the UK."

Dougie, your label is called "Conscious Sounds". How important is "being conscious" for you guys?
Dougie Wardrop: "I think it's very important. If you listen to all the rap music, even though a lot of it is very tongue-in-cheek, it's still very violently orientated. Materialism and greed, that's all it is! "I've got twenty gold chains! I've got ten girls!", it's just rubbish, really. The common denominator is sex and violence. Even in the pop world there are hardly any good bands anymore. Old bands like The Rolling Stones still keep on going because there's no one to take their place. Conscious music is just better; music with a message that makes you think about stuff when you buy it. All this rubbish you hear on the radio every day just drives me mad."

Tonight you're in VK with Disciples and Zion Train. What's your connection with them?
Dougie Wardrop: "I've known them for years. Russ (Disciple, red.) used to come to our record shop, when I was still working there at the end of the eighties, to sell his records. I listened to them and asked him what kind of drum machines he used. Zion Train came afterwards."

I have to mention one more name to you guys and that is Thierry from Ashanti 3000, one of the main forces in the dub steppers scene in Belgium. How did you meet?
Dougie Wardrop: "You're forgetting Dread Pressure there! (laughs)"

Correct, there's Dread Pressure too of course!
Dougie Wardrop: "Well, we met up via Sandrine, who's a promoter here in Belgium. She used to come to my record shop in London to contact singers like Bim Sherman. She also used to listen to the stuff from the UK and she liked it."

Kenny, you've been spending so much time in Belgium recently, that we were wondering if you've already applied for a Belgian passport?
(laughter)
Kenny Knots: "No, I don't have a Belgian passport yet, but it's always nice to come here."

So you enjoy it then?
Kenny Knots: "Yeah man! Good vibes, good music, good people, that's all we need in life. If that is what Jah decided for me, Rastafari, so be it!"

Culture, the last word goes to you tonight. Maybe you can give us a message you want to pass to the readers of this interview?
Culture Freeman: "I just want to tell them to keep on lighting up their spliffs, and if you can find a chalice, light up your chalice as well! The power of the herb is never done! Advertise for the brain-food!"