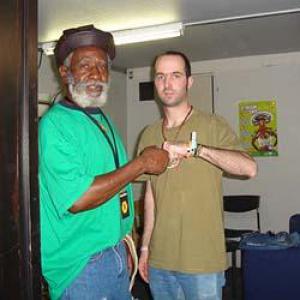 Spear, the past few years you've been working on an autobiographical DVD which will be called "Life Of A Legend". Is it slowly nearing completion?
Burning Spear: "(laughs) To be honest we're still working on it because there's still a couple of things to be accomplished before it can be finished. Then there's still a lot of editing to be done and finally it will be ready for release. We want to do it the best we can, that's the thing."

Did it make you remember or rediscover some things from your own past you had forgotten about?
Burning Spear: "Of course, there are a lot of things like that that I discovered looking back and getting further involved in the process and they will also be included in the movie."

The story of your encounter with Bob Marley is well known; he being the one that pushed you towards Studio 1, but how do you remember those early days at Studio 1? How do you recall Coxsone?
Burning Spear: "Things like that you never forget, because it's where you started from. It was the first step for Burning Spear. Bob told me to go there, I went and I sang my first song 'Door Peep' there. Since that time the Spear's been burning, so you can't ever forget!"

The last few years you've been putting a lot of energy in getting back the rights to your music. Has that journey ended now?
Burning Spear: "No, I wouldn't say it has ended. I'm still working on getting back a couple of things from various people. I've been through some rough times dealing with distributors and record companies here in Europe. The last company I worked with was Nocturne (French distributor, red.), but that collaboration has ended too. I'm expecting them to return my masters to me and after that no one will be licensed to distribute any Burning Spear records without written consent from Burning Spear himself!"

One of the pillars of Rastafarianism is the ital way of living. Is that something you subscribe to?
Burning Spear: "The ital way of living? Well, one should eat what one wants to eat and feel comfortable with it. Ital does not mean not eating this or just eating that. You just have to make sure you're feeling pleased with what you are eating and know what you are eating is good for your body."

I also know you enjoy your glass of wine. Is that something you consider to be one of your hobbies?
Burning Spear: "I'm not a beer drinker, so I like to drink my glass of wine. But remember, drinking a good glass of wine is better than drinking a whole bottle! When you just enjoy one glass of a good wine, you can feel it dripping all through your head. It's really good for your body."

Any wine you would recommend to your fans?
Burning Spear: "I always enjoy anything coming from the Bordeaux region. California has some good wine too now and the same goes for Italy. You can't really stick to one flavour of wine, it's best to try different flavours from different regions."

One of the most chilling moments I know from Burning Spear is when you sang 'Jah No Dead' a capella on the beach in the movie "Rockers". How did you get involved in that movie?
Burning Spear: "Well, the people who were doing it wanted me to be in the movie so it was they who contacted me. I did the song 'Jah No Dead' as you say and I must admit the result looked good even though I must add I didn't get any profits for taking part. But at least it showed Burning Spear to a lot of people who didn't know who Burning Spear was yet. It was a good experience."

Surrounding Bob Marley's 60th birthday a lot of celebrations were staged all over the world, but you seemed to keep yours quite low key. Was that an intentional choice?
Burning Spear: "Yeah, I don't really like the whole celebration thing based on birthdays. I prefer to keep it low key and give thanks for being around and still being in the best of health, functioning the way I want to function full of strength and energy."

Recently you also became a grandfather. How important is family life to Burning Spear?
Burning Spear: "It's very important. Every new generation is a joy for generations will follow after generations and so on. I had a granddaughter just now. The time was right for it and hopefully she will grow up in this world and maybe even become something very important."

Are any of your children also looking towards music?
Burning Spear: "I don't know. It can be there but I haven't seen it yet. Maybe it will show in time. One of my daughters, my firstborn (Edna Rodney, red.), did a couple of background vocals on the 'Appointment With His Majesty' album, but after that she didn't pursue it further."

You've been looking back a lot doing your research for the DVD, but do you also still look to the future? Any goals you still want to achieve?
Burning Spear: "To be honest right now I'm producing myself, I record my own albums, have my own label and take care of my own bookings. I give thanks for all those things I've been doing and for whatsoever I've achieved in life. Possibly there are still things out there that still need to be accomplished, but we have to take it step by step."