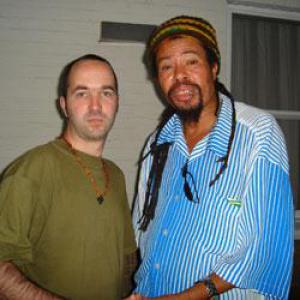 Briggy, you didn't really start your stage career as a deejay...
Brigadier Jerry: "No, I did a little comedy thing in the community, you know. I come from a lively family, so it was sort of a natural thing for me. Honestly, I was still very young at that time and I didn't take it too seriously; it was just a bit of fun."

Is humour still an important factor in your life? Can you still enjoy a good joke?
Brigadier Jerry: "Yeah man! That kind of thing keeps a person alive! If you can't take a joke, leave it, but I like a bit of fun now and again."

As a deejay, how and when did you hook up with U Roy's Sturgav sound system?
Brigadier Jerry: "Originally I backed a sound from my community called Emperor Marcus, but after I linked up with the Rastafarian Twelve Tribes of Israel organisation, I became the resident deejay for Jah Love sound. My relationship with Sturgav was more on and off because they already had their resident deejays in Josey Wales and Charlie Chaplin."

Recording-wise there is not too much Brigadier Jerry material out there; your album catalogue is rather limited.
Brigadier Jerry: "Well, about that, I have to say I put 25% of the blame on myself and 75% with the Twelve Tribes of Israel organisation. At the time when I was a member, they didn't want you to go out of the organisation to do recording work. The Twelve Tribes was setting up their own thing at that time, but I never saw it going anywhere. I often think that if I would have been allowed to record more tunes back then, things would have turned out better for me."

How do you look back on your time with the Twelve Tribes of Israel now?
Brigadier Jerry: "I haven't got anything bad to say about no one, because in everything you've got good and bad. It was ordained and set out by the prophet (Prophet Gad aka. Dr. Vernon Carrington, red.) to work as it should, but there were some individuals that didn't want anybody else to rise above themselves. I won't claim they locked the gate completely, but they shut it and made it very hard to go through. Still, I have nothing bad to say about the Twelve Tribes of Israel. I've been there since 1979 and I'm still there today!"

I suppose you also met up with the prophet Gad at some point. What kind of a man was he?
Brigadier Jerry: "He taught me a lot of things, the essentials that have kept me going until today; things like reading your Bible a chapter a day. Gadman set out the straight path to follow, but some of the members of the Twelve Tribes organisation switched all that around."

Musically speaking it seems you kind of sowed the seeds for female deejaying, seeing you were a role model to both Sister Caroll and your own sibling, Sister Nancy.
Brigadier Jerry: "Well, I definitely taught them, showed them how it was done, but in the end it was them showing their talent and bringing it forward of course."

You've always upheld the tradition of bringing positive lyrics. How do you regard the music that's being produced on the island these days?
Brigadier Jerry: "I still hold my belief in the people. As a cultural deejay I never talked slackness, even when most of the deejays in the late seventies and early eighties started shifting gear. As a member of the Twelve Tribes organisation, it just wasn't an option for me. Even some of the softer lovers tunes I did, talking about this or that girl, were considered slack by the organisation, but in the end that was good, because it kept me on a conscious and focused path. Slackness tunes never last very long. I've been in the business for over 35 years now and roots and culture is still going strong same way."

How does a veteran deejay, like you, regard a man like U Roy?
Brigadier Jerry: "Respect to the max due! That man is the godfather! When I started out he was the deejay we looked up to. You had Big Youth and I Roy as well, but none of them ever got three tunes in the top ten at the same time like U Roy did. I'm still waiting for that to happen to me! (laughs) The man is the original godfather, no discussion about it. He's the teacher. The man should be honoured by every single artist in Jamaica!"

You're among the whole list of deejays having a military title in their stage name. Where did that tradition have its origins?
Brigadier Jerry: "Most of the deejays in my day were calling themselves Ranking this or that - you had Ranging Trevor, Ranking Joe and so on - so I said to myself: "I'm going to take it a step further and name myself Brigadier!" The Jerry part of my name came from my father whom everybody knew as Mr. Jerry. Nobody gave me my name, I named myself and it's just about the best name I could ever have had."