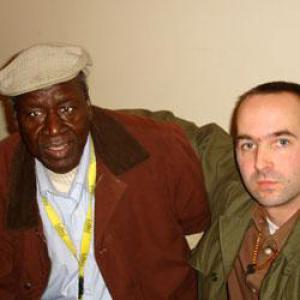 After the passing of his good friend Ali Farka Toure, Boubacar 'Kar Kar' Traore seems to be the logical heir to the throne of the Mali blues. In Boubacar's case that means a combination of virtuoso guitar play and melancholic lyrics. The man has passed the sixty mark a while ago already, but he seems far from ready to retire. We felt slightly honored when he agreed to meet us just before going on stage at Flagey in Brussels.

Boubacar, you're already at an age where the inconveniences of an international tour can become burdensome. What drives you to keep doing it anyway?
Boubacar Traore: "Well, I'm a musician so I guess it comes with the territory. I was born a musician really and, although it is true that it can be a bit tiresome at my age, I think after all these years I've become accustomed to it."

Mali has that old griot tradition, families producing musicians and singers from generation to generation. You're not from a griot family yourself, so was it difficult for you to become a musician?
Boubacar Traore: "No, it wasn't that hard really. My older brother (Maciré Traore, red.) taught me all about music and how to appreciate it. It's a fact that the griot tradition still exists in Mali, but there are many other castes as well. Personally, I stem from a family of noblemen. Things have slowly but surely evolved and today there are a lot of Malians without a griot background who are musicians all the same."

You just mentioned it was your brother who introduced you to music and I believe it was also his guitar that you learned to play on?
Boubacar Traore: "Yes!  It was even the first guitar I ever saw! I didn't know how to play yet, but I saw my brother at it and I just loved the sound of that instrument. When I asked him, he gladly taught me how to play. You have to know my brother is a professor of music; he studied music in Cuba for eight years. My professional career started somewhere in the beginning of the sixties, but after the first few years I left the music business behind and did not perform for many years. In that time it was still only the griots that could make a living from their music. If you weren't from a griot background, you would not make a cent. That's why I called it quits and stopped performing for about twenty years. I was only rediscovered in 1991!"

Before you discovered your musical vocation, you had one other passion in your life: soccer! Do you still watch the game these days?
Boubacar Traore: "I still watch the odd game of foot yes, but my playing days are long gone. When I was younger, I was the best player in my region, Kaye. At one stage our team just kept winning game after game after game! It was also at that time that I got my nickname 'Kar Kar'. In our language (Bambara, red.), "kari kari" means "he who dribbles a lot"."

So your nickname isn't music- but football-related then?
Boubacar Traore: "Yes, exactly. During the sixties, at the time when Mali became independent, I recorded a tune called 'Mali Twist', which went on to become a massive hit in the whole of West Africa. That's when I decided to focus on my music and forget about football, but the name kind of stuck."

In the West the kind of music you play is often referred to as Mali blues. Your countryman and friend Ali Farka Toure wasn't too fond of that term.
Boubacar Traore: "Ali Farka Toure was a bluesman none the same! Sadly he has left us now. We still did a documentary together a few years ago ("I'll Sing For You", Jacques Sarasin, 2001, red.). His music was very profound and he was like a brother to me."

You developed a unique guitar playing style that is technically very close to the way in which a kora (traditional African harp, red.) is played.
Boubacar Traore: "Right. The kora is an authentic Malian instrument counting 21 strings. A guitar only has six strings, but I play it like one would play a kora. We call that double-scaled playing. When you play like that, you give your audience the impression they are listening to three musicians playing together, instead of just one. You might call it my signature style."

Do you pass on your technical skills to the future generation of Malian guitar players?
Boubacar Traore: "I've always taught the guitar, yes, but now that I'm getting on in life, I tend to tire faster so I've kind of abandoned my career as a tutor. However, a lot of youths still come to my house regularly and usually we end up playing some music together."

At a certain stage you left Mali to go and work in France. Having lived the life of an African immigrant in Europe, what is your message for the youths ready to risk their lives to do the same?
Boubacar Traore: "They have to realize that leaving Africa in search of a better life in Europe can be an exhausting enterprise. Some go on foot, others take a boat or even a plane; it all depends on how much money they have, and only few ever really manage to make a decent life for themselves when they finally get to Europe. Living in Europe can be very difficult, but a lot of people in Africa find that hard to believe. Poverty also exists in Europe! Personally I've lived in France for about two years, working as a laborer. Luckily someone rediscovered my music and turned my life around."

If we look at West-Africa, almost all of the nations surrounding Mali have had their share of war and misery. What is it that saved your country from suffering a similar faith?
Boubacar Traore: "The thing that has spared Mali from undergoing a similar faith is the fact that in our country everything is based on your descent. I'm a Traore, but in Mali you also have the Keita and Sangare families, to give you but a few examples, and we are all united in one intricate system, so fighting each other would benefit no one (Kar Kar is referring to the caste system - in which every family had its role to play - instigated in the 13th century by Sundiata Keita, ruler of the Manding empire, red.)."