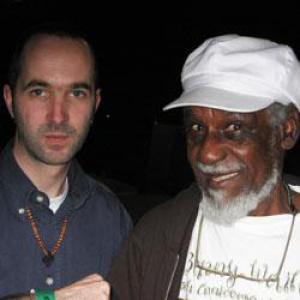 Bobby, you are one of the many famous ex-alumni of that now legendary institution the Alpha Boys School.
Bobby Ellis: "Oh yes, I certainly am."

Alpha was not really a school where ordinary kids went, so how did you end up there?
Bobby Ellis: "Well, what really happened was that my father was working at the government hospital. The doctor who was in charge there, worked at Alpha too. That's how I and my brother got in."

Did you come from a musically inclined family?
Bobby Ellis: "No, not really, but after I left Alpha and went to live with my mother, I discovered my grandfather was a musician to."

You're a renowned trumpeter now, but was the trumpet your first love or did you play another instrument first?
Bobby Ellis: "To tell you the truth, at first I just wanted to play music, what kind of instrument didn't even matter much. Then, look around at the different instruments that were being played at Alpha, I noticed the clarinet and saxophone both had many keys on them and thought to myself: "Boy, that's going to take me a long time to learn how to play that!" Now the person, who introduced me to the bandmaster to get me in the band, was a trumpeter, so I just went with that. I was sorry after a while though (laughs). I was running from the keys but the trumpet took my lip. I'm thankful I excelled enough at what I do to please people."

You've been playing for more than forty years now, so, to state it simply, you played with virtually everyone in Jamaica.
Bobby Ellis: "Almost everyone yes."

If I asked you to name a name or a session that stuck in your heart, could you do that?
Bobby Ellis: "(laughs) No, that wouldn't be fair. I played so many sessions with so many different people, asking me to single one out would be unfair."

Of course you were also there during the glory days of Studio 1. How do you remember that period?
Bobby Ellis: "That was the period when my name was getting a bit known in the music business, because before that I wasn't really in the recording business. Until then I had been playing in a band called The Mighty Vikings."

What kind of music did you play?
Bobby Ellis: "Mostly pop music. I used to arrange the music for the other band members. At one point we won an award as band of the year and that's how we ended up at Coxsone's. The first tune I played there was an instrumental called 'Cyrus'. And then I played with people like Joe Higgs and Delroy Wilson, The Wailers and so on. One of the biggest jobs I did at Studio 1 was on the Bob Andy tune 'I've Got To Go Back Home' for which I wrote all the horn arrangements."

As a trumpeter how did you cope with that period in the eighties when music started to get digitalized and horn players became redundant?
Bobby Ellis: "Actually, I was about the only hornsman in that era that didn't leave Jamaica. I used to get an odd job here and there and tried to keep the horn fire burning."

For me, replacing the horns with the sound of a keyboard, never really worked.
Bobby Ellis: "No, a keyboard doesn't give you the same kind of vibes and inspiration as when a hornsman plays. A keyboard is too mechanical. A hornsman really knows how to get the soul out of his instrument."

When I talked to David Madden, the thing he regretted about being a trumpeter, was always having to be at the back of the stage backing other artists. How do you feel about that?
Bobby Ellis: "I'm really a background man you know. I don't really know why. I like to support the front runners. I guess that's how the Father made me. I just always gave it my best and I hope the people appreciated that."