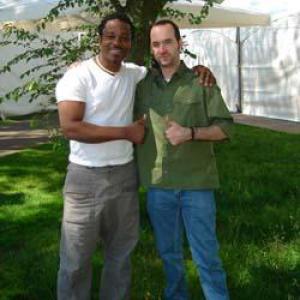 Blick, your debut album, ‘Léman', is somewhat surprising in that it doesn't really have that well-known West-African sound. Instead you seem to have drawn from Brazilian bossa nova and jazz.
Blick Bassy: "I'm from Cameroon, and rhythmically, Cameroonian and Brazilian music are quite similar. I'm often told my songs have a Brazilian feel to them, but these rhythms are truly African and if you know that Brazilian music sprouted from the rhythms black slaves brought over from Africa, it's only logical that there are certain resemblances."

You grew up in Mintaba, a small village in Cameroon. How did you get involved in music?
Blick Bassy: "When I was eight years old, my parents sent me to the country so I would get to know traditional culture, and it's there my love for music started. In Africa, every ceremony is accompanied by music. During my stay in Mintaba, my grandfather, who always participated in these ceremonies, would take me along so I would learn more about my Bassa heritage. I also have to add that my mother was a singer. Not that she was a big star or anything, but she was literally singing all the time even when she was doing her daily household chores."

Where did you learn to play the guitar?
Blick Bassy: "I taught myself during my stay in Mintaba. In these small villages nothing much happens, but once a month a travelling troubadour would stop by to sing his songs and play his guitar. That really was my first introduction to the guitar and I fell in love with its sound immediately."

You're actively trying to preserve Cameroon's cultural heritage, choosing to perform in Bassa dialect; that means, though, that western audiences do not understand what you are singing about.
Blick Bassy: "True, but to me music is all about emotion. You can't really expect people to understand every language spoken on earth. People who don't understand the words I'm singing can still sense what I'm going on about. Superpowers like the United States impose their language and way of life on the rest of the world. Even in Cameroon, young people are starting to dress like Americans and listen to r&b and hip hop, even though they don't understand a word of the lyrics. I insist on singing in Bassa, because in Cameroon the only two official languages are English and French, while at the same time there are 260 tribes, all with a different dialect. The situation in Cameroon is not like the one in Mali for example, where apart from the local dialects there's the Bambara language that is spoken in the whole country. In Cameroon, people don't understand each other's dialects at all, so in general French is spoken. A lot of young people don't even speak their local dialect anymore, so they also can't pass it on to their children and because of that there's a serious risks the African dialects in our country will be completely eradicated.  Another reason why I sing in Bassa is because the language has a tonality that's very well-suited to my music. If I would sing the lyrics to my songs in English, the songs would sound completely different."

Although you're clearly focused on your culture and heritage, you still opted, like so many young Africans of your generation, to migrate to Europe.
Blick Bassy: "In Cameroon you just can't make a living as a musician. That was the main reason why I left. When you're an established artist, like Youssou N'Dour, for example, you can live in Africa, but I simply don't have the financial means to travel back and forth between Europe and Africa every time I have to do a concert here. It wasn't until I came to Paris that I met the people of World Connection and everything really started happening. Leaving Cameroon also allowed me to start appreciating the great things Africa has to offer. It wasn't until I came to Europe that I started noticing how we are slowly losing our culture. In the West, we are communicating with each other less and less. Almost everything is automated these days, so the need to talk to each other has disappeared. That is something we still have in Africa, something that should be treasured, but once again you have to leave Africa to notice the difference. It might surprise you, but I only got to know Malian music when I came to Europe; in Cameroon it just isn't played."

Now that you're mentioning Malian music, 'Léman' was in part recorded in Salif Keita's studio. How did that happen?
Blick Bassy: "Well, as I just said, I discovered Malian music when I moved to Paris. There I got to know the wonderful sounds of instruments like the Kora and Ngoni. Mali has more of a pentatonic music tradition, while we in Cameroon sing diatonically and that made me think: "What if I was to use these Malian instruments and combine them with a different style of singing?" To try and make that experiment work, I felt I had to travel to Mali and that's how I ended up in Salif's studio."

Talking about Cameroon often equals talking about football. Are you a football fanatic yourself?
Blick Bassy: "Yeah, I love the game! It's true that when people talk about Cameroon, football is often mentioned. I think the successes the Cameroon national team has booked in the past are an example of the combative spirit of the Cameroon people. My fight is on stage, theirs is on the field, that's the only difference!"