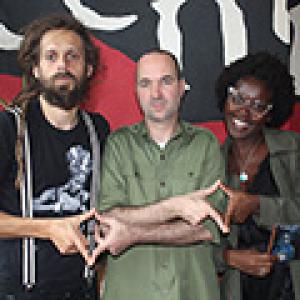 Bleue, could you maybe start out by shortly introducing yourself?
Bleue: "(in Dutch) Hallo België, ik ben Bleue, aangenaam (Hello Belgium, I'm Bleue, it's a pleasure, red.)! I'm a 24 year old Jamaican singer from Spanish Town. I graduated in media and communication studies and my major passion in life is music."

You're now presenting your debut album 'Into The Bleu', a collaborative effort with Belgian band Pura Vida; a connection that was established through their link with Song Embassy.
Bleue: "Right! Song Embassy is a quaint little yard in Papine, Kingston 6 established by Paul Campbell, Special Lecturer at the department of Entertainment and Management at the Vocational Training Development Institute in Papine, but also a music publisher, former host of 'Monetize Music' and a consultant for More FM, a community radio station in Montego Bay. It's like a community center with a nice family vibe. Basically it's a very peaceful conscious space where you can focus on making music. Not necessarily for commercial purposes, but if you're heart is in music it's the perfect place to hang out and meet up with other likeminded people."

Bregt how and when did you exactly link up with Bleue?
Bregt 'Puraman' De Boever: "Well ever since we started collaborating with Lee 'Scratch' Perry, many doors opened themselves for us. The people at Son Embassy admire Lee like we admire him, so there was an immediate chemistry. They asked me to send them some riddims and from the tracks I got back, one that really stood out was a song by Bleue called 'Think About Life', which eventually became the opening track on 'Into The Bleu'. I really felt I wanted to work with her, so I proceeded to send her riddim after riddim and we continued exchanging music over the internet. It might be interesting to note that we only really got into a verbal conversation when she arrived in Belgium a few weeks ago! (laughs) Until that time we'd simply communicated with our music. We didn't really plan on releasing an album together, but the songs we'd created were so good we just felt we had to put it out there."

Bleue, as far as your recording output goes, is 'Into The Blue' your debut effort?
Bleue: "Oh yes, this is definitely my debut album. I've always been artistic and poetic, and have been writing songs for as long as I can remember, but as far as sharing my music with the rest of the world, this is a first. In fact the same is true where performing on stage is concerned… My first stage performance was on September 2nd of this year at 't Endezomer festival in Aalter! (laughs)"

Stating things are moving fast is probably an understatement then?
Bleue: "Yeah, to be honest, I'm still a bit in shock… Just the fact that after being in contact with these guys for over a year now, I'm actually here in Belgium feels kind of surreal. But so far it's been great fun!"

Doesn't it feel weird though, that you will be returning to your native Jamaica where you're still an unknown voice, when over here in Europe you've already released this wonderful album and performed at a number of events?
Bleue: "That's definitely weird, but I feel I'm a part of "brand Jamaica" and I don't feel there's anything wrong with me coming over here to promote Jamaican culture and myself. Jamaica is like a pool of talent with almost everyone you meet trying to become a star, so I decided to step out of my comfort zone by joining forces with this group of musicians from Belgium."

Correct me if I'm wrong, but reggae wasn't exactly your first love in music.
Bleue: "True… Growing up I certainly didn't listen to a lot of reggae music and was more into pop, rock, indie-folk and jazz and blues of course. I've got a vintage soul, so once I started exploring the genre I leaned more towards the work of the foundation artists. I think you can also hear that vintage rootsy influence when you listen to 'Into The Blue'."

Am I right in assuming Nina Simone has been a big influence?
Bleue: "Well, as I just mentioned, I've always liked blues music and she just had the most inspiring strong voice. When Nina sung it always sounded so effortless. I just really admire her work."

Just looking at the title of the album, someone who wouldn't know better might assume it's actually a blues album.
Bregt 'Puraman' De Boever: "Well, I've always considered reggae music a form of Caribbean blues anyway. Both genres have many things in common; for instance blues as well as reggae is music that came from the souls of the descendants of black slaves. It's just the fact both genres were created in different locations that has made them develop in different ways."

Bleue, your real name is Chantelle Smith. On the album it just reads Bleue, but your Facebook account reads Bleue Bird. Was the little bluebird the inspiration for your stage name?
Bleue: "No, not really. I've always had this tendency of inventing and reinventing myself by giving myself a new name. I started referring to myself as Bleue when I left high school. First it was Skaii Bleue, like on my Instagram account, but then I shortened it to Bleue."

Ever since the beginning of the twentieth century in poetry and song the bluebird has been a symbol of happiness. Is that an image you can identify with?
Bleue: "Yes, absolutely, and birds in general have been somewhat of a recurring theme in my life. To me they symbolize freedom and chasing after your dreams. Of course a lot of bird species are also known for their song, and since I'm a singer it kind of made sense."

It might not be by sheer coincidence that you ended up in Flanders in Belgium though, as the concept of the bluebird as a symbol of happiness was first cornered by playwright and poet Maurice Maeterlinck in his play 'The Blue Bird'.
Bleue: "Cool, that's nice to know!"
Bregt 'Puraman' De Boever: "She really seems to have come full circle! (laughs)"