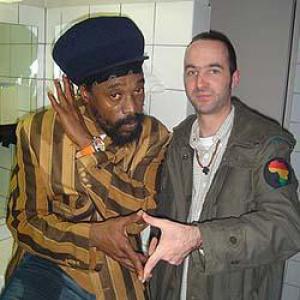 Saying Black Uhuru is saying Michael Rose. Even though he wasn't really there from the very beginning, his unique voice has become synonymous with the Black Uhuru sound. Leaving Black Uhuru in the mid-eighties and establishing a successful solo career in the nineties, Rose recently regrouped with Duckie Simpson to tour the world as Black Uhuru once again. We met up with him in Antwerp and asked him how and why.

Michael, how is it to be back on the road as Black Uhuru, after so many years?
Michael Rose: "It's good. The world was waiting for it and it's a good vibe that we could get together again. The tour has been ok so far, so no problem!"

The Black Uhuru formation that you were a part of was the most famous one without a doubt, but it wasn't the first Black Uhuru that existed. How did you get involved?
Michael Rose: "We (Michael Rose & Duckie Simpson, red.) are from the same neighbourhood, Waterhouse Kingston 11. I used to do some entertaining on the north coast, but wanted to try to do something with Duckie because nothing was really happening with Black Uhuru at that time. We did some rehearsals, everybody seemed to like the sound, it was new and fresh. After that I got Sly & Robbie involved."

That's my next question. Apparently there's a big link between yourself and Sly Dunbar?
Michael Rose: "Yes. We grew up in the same neighbourhood. Sly and my brother were close friends. I wanted to record the first Black Uhuru album with Sly & Robbie, but they were touring with Peter Tosh at the time, so we recorded the album for Jammy's and did some singles for DEB-music, Dennis Brown's label, called 'Wood From A Fire' and 'Rentman'."

If I said that the secret of Black Uhuru's success lay in the combination of your extraordinary voice and the revolutionary new sound of Sly & Robbie, would you agree?
Michael Rose: "Yes, but actually, I had a solo career before Black Uhuru. I worked with Lee Perry and Niney The Observer. For Lee I did 'Observe Life' and for Niney 'Freedom Over Me' and of course 'Guess Who's Coming To Dinner', but the combination with Sly & Robbie was great or even exceptional. There was no other sound like that!"

Black Uhuru became huge, at the peak of your popularity you even won a Grammy Award, but then Michael Rose decided to quit and retreat to the mountains. What really happened back then?
Michael Rose: "We just decided we couldn't go on anymore and I retreated to the hills in Jamaica. Things like that just happen."

At the beginning of the nineties you returned to the music scene, so that musical bug must have bitten you again. What was it that brought you back to singing?
Michael Rose: "The people! They kept coming up to me saying: "Oh Michael what happened? We think you should come back to singing!", so I said: "Well ok then, let's do it!""

Some of your best solo albums were recorded with Niney The Observer. Is he special to you as a producer?
Michael Rose: "He was already there when I was an upcoming artist, so that's why. We knew each other well."

You're back together with Duckie now, but of course there's one person missing, Puma Jones. How do you remember her?
Michael Rose: "Puma played a very important role in Black Uhuru. The vocal combinations we did, her dancing... She was a nice person."

What was the actual spark that brought you back together with Duckie and is the chemistry still there after all these years?
Michael Rose: "Yeah, the chemistry is there. You'll see that at the show tonight. (laughs) Actually, it was Beres Hammond who brought Black Uhuru back together. Beres saw me and said he needed to speak to me so I went up to his house. We talked for a couple of hours and he said to me: "Boy, I would like to ask for Black Uhuru one more time!". So I said to him: "Well ok, if you can work it out with Duckie.". He said: "Yeah man!", because he and Duckie had been reasoning on the same issue. I then met Duckie one of the following days and we just took it from there. We called The Gleaner (Jamaican newspaper, red.), and they came and did some pictures. We even started an album already, together with Beres. I don't know if you heard the track 'Dollars' yet? (starts singing) "Poor man rise in the morning, praying to the father. Dollars them a have make them a gwaan so..."."

On a more spiritual note; how did Rastafari find you?
Michael Rose: "Well, that is a long story. My family, my parents didn't believe in Rastafari, so it was very hard for me, but I stood for what I believed in and hung in there."

What does being a Rastafarian mean to you? What does it entail?
Michael Rose: "Rasta is a way of life! It's natural, a sort of "love mother nature" and "save the world" kind of thing."

In closure, do you have a message for our Belgian readers?
Michael Rose: "Jah greetings to all! We're here in Belgium tonight and it's going to be a great night. Just stay tuned for the next chilling episode!"