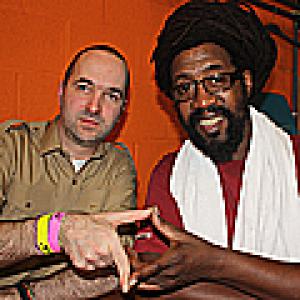 Steel, how many years of reggae music are we talking about when we look back at your career?
Black Steel: "I'm in the music business for just over thirty years. In truth, my first steps in music were still earlier than that. When one of my teachers in high school asked if anyone felt like joining a band, I immediately raised my hand and have never looked back since. I started out playing a recorder, moved on to the trumpet, then the steel drum and finally to acoustic guitar. My music teacher really wanted us to be as versatile as possible and I'm still very grateful for that. One of the first real bands I joined, after I left high school age fifteen, was called E & G Embarkers Band, which was sort of a pop group. That's where I got my first taste of the drums. Then one by one, like a dream come true, I started meeting people like Winston Groovy and Desmond Dekker and became a member of bands like The Aces, Macka Band and Sheer Gold, which was called Negro In Roots in the early days. In 1983 I then met Mad Professor and once again my career took a whole other turn."

At which stage did you get the Black Steel stage name? Is that linked to your guitar playing?
Black Steel: "Yeah, absolutely! Jerry Lyons (guitar and bass player for Twinkle Brothers, Fasimbas, Robotiks, red.) heard me playing a riddim on the guitar one day and told me: "Boy, you sound like stainless steel!". At first I didn't like it that much, because I was still a bit of a bad boy in those days and the "steel/steal" reference seemed a bit over the top (laughs), so I added "black". Afterwards I learned there was also a rock group called Black Steel (Australian heavy metal band, red.) and when Tricky released a song with the same title, people even started asking me if I was the one singing that tune!"

One of the most important parts of your career was your involvement with Mad Professor and Ariwa.
Black Steel: "In 1983 I was asked to do some session work at a studio where I had never been before and that was at 42 Gautrey Road in Peckham (the second location of Mad Professor's Ariwa Studio, red.). I was introduced to Mad Professor by Vincent Simon and Tony Rankin. He quickly sussed I was quite a talented musician. In the beginning it was Sergeant Pepper on keyboard, Anthony 'Drumtan' Ward on drums, Derrick Litchmore on bass and me on rhythm guitar."

Ariwa created a whole new sound in reggae. Were you aware of that when you were working on that music?
Black Steel: "That pretty much started when Mad Professor bought his first drum machine/sequencer to cut down on costs. Up until that moment all the Ariwa music was played by actual musicians in the studio, but once we got that drum machine I could do a lot of that work by myself; I programmed the drum machine, first doing the keyboard parts, then the bass and finally piano and rhythm guitar and sometimes even backing vocals if they were needed! (laughs) The drum machine days are now largely behind us and once again it's back to live instrumentation, which suits me just fine."

Seeing that you are a multi-instrumentalist, is there a particular instrument that you consider to be your favorite?
Black Steel: "Definitely the bass, but I fill in wherever I'm needed, I'm not difficult about that."

You've spent most of your career backing other artists. Haven't you ever felt the urge to start a project centered on yourself?
Black Steel: "Well, I don't really like to go into it too deep, but I actually did get offered a deal by Sony Music at one stage. To my dismay Mad Professor managed to thwart the idea, so it never manifested. That could have been my chance, but at the same time I'm very happy backing all these legends before they're all gone. My big dream was always being able to meet and work with all these legends, and boy I can't complain on that front! It might be time I start working on a documentary about my career in the music business, so people get to see the actual extent of the works I have done."