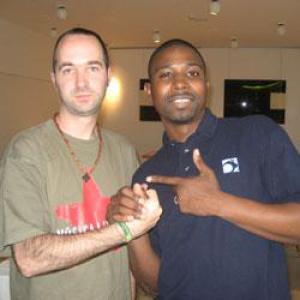 Bitty, welcome in Belgium once again, a place where you have quite a substantial fan base I believe?
Bitty McLean: "I'm not sure about that actually. The last time I was in Belgium was when I did a show with Civalizee (Foundation, red.) in Antwerp; that must be about two years ago now (Kaaiman, March 2006, red.). I was supposed to be here at Reggae Geel last year, but unfortunately due to illness I had to cancel at the last moment. Not everyone knows Bitty McLean yet, but I try to give it my best every show I do, and slowly but surely people are starting to recognize that."

From listening to your father's big record collection whilst growing up, you mainly got influenced by soul, jazz and rhythm & blues...
Bitty McLean: "And reggae as well of course, because my father used to import records from Jamaica, first ska and rocksteady and later reggae. Although by the time I was born reggae had become the mainstream music on the island, the main soundtrack of my youth were groups like The Melodians and The Paragons and artists like Louis Jordan, Fats Domino, Nat King Cole... my father's record collection contained a broad spectrum of music really. (laughs)"

Looking at the UK, most Belgian reggae fans will probably think of London first, but you grew up in Birmingham in the west of the country. What kind of place was that for a black youth to grow up in in the seventies?
Bitty McLean: "It was perfect really. Not a lot of people know this, but Birmingham actually has the largest Jamaican population in the UK and that way the city really became the focal point for the music and culture as evidenced by bands like Steel Pulse, UB40, The Specials and The Beat. All these bands were based in the West Midlands."

I think I can honestly say your big break came when you started collaborating with UB40.
Bitty McLean: "Most definitely yes."

How did that partnership come together?
Bitty McLean: "I was learning sound engineering at college at that time and my lecturer, who had previously done some work with UB40, introduced me to their studio manager. Eventually I stayed there for about three years. I learned an incredible lot in that time, technically but also as a writer and producer. It was sort of an apprenticeship you could say. My career as an artist sort of started backwards, because almost overnight I scored this massive hit with 'It Keeps Raining'. For me it was a great way to be introduced to the industry because at the top, the higher levels of pop music so to speak, there's a lot more pitfalls to watch out for, so you have to learn very quickly if you want to stay on top of the game. Having come back down to the independent level with my own label now, I feel very secure because I have already got the knowledge to see it through."

You just mentioned your biggest hit 'It Keeps Raining'. How do you look back on that song?
Bitty McLean: "I would say with pride, but nothing has really changed. The whole concept of the 'On Bond Street' album is really the same as what I did with that song. It was a version of a Fats Domino song from my dad's record collection, so I've kind of come full circle, so to speak. I've come right back to my first musical influences as a child and that's where I feel most comfortable: mixing the old with the new. There will always be new generations of music lovers who've maybe never heard of Alton Ellis or John Holt. There's nothing new in music, it's all been done already somewhere along the line and the only thing I can do is add my interpretation and my sound. It shouldn't only be about the new vibe either, I like looking back and bringing the old stuff forward so young people can rediscover it."

For the 'On Bond Street' project you decided to focus on old Treasure Isle riddims.
Bitty McLean: "Yeah, that was the concept of the album from the very beginning, because no one had ever touched Duke Reid's catalogue before. From all the riddims we used for the album, you will probably only find one or two versions."

'On Bond Street' was quite successful.  Do you have any plans for a follow-up, maybe using Studio One riddims?
Bitty McLean: "There was talk about that for some time, but to be honest it didn't feel quite right to me. I didn't see any progression in doing a Studio One album now. Don't get me wrong, I would love to do a Studio One album at one stage, but doing it now as a follow up to the ‘On Bond Street' album would be like surfing a comfortable wave. Just saying: "Oh well, I did an album with old riddims that did well, so let's do another one." did not feel creative enough to me. I'm working with Sly & Robbie now and that slightly raises the bar to another level. We're only using three or four riddims from their back catalogue, the rest of the songs will feature brand new material."

Where is that project at now? The album was originally announced for release in 2007.
Bitty McLean: "(slightly embarrassed) I know! Thing is that Sly & Robbie have been very busy with other projects as well as have I for that matter. A lot of musicians will say: "Music is life!", but for me my children are my life, so I can't just be working on my albums 24/7. The original concept of this project was to put the album out and then go out and tour with Sly & Robbie, but the timing for that just hasn't been right until now. (The album 'Movin' On' was eventually released in 2009 on Taxi Records, red.) The stars haven't aligned just yet! (laughs)"

I know you also teach sound engineering. Is the fact of being able to give back to the community important to you?
Bitty McLean: "Well, what happened is the lecturer who taught me at college called me one day and asked me if I would be interested in doing some mentoring, talking to the students and so on. Things kind of progressed from there. I've always said I don't want to be touring anymore when I'm 50 years old; I'd rather get a teaching certificate and go back to sound engineering. I want to do a couple more albums, do some touring and then quietly go back to my humble beginnings, giving back to the community as you say."