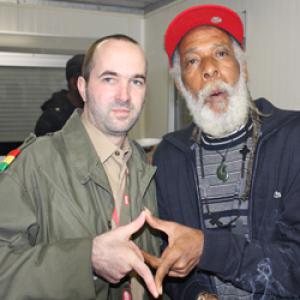 Big Youth, as one of the first things in your career you performed with a soundsystem called Lord Tippertone.
Big Youth: "Yeah, His Mightiness, Emperor Lord Tippertone! In those days you had a lot of great soundsystems like Sir George The Atomic, King Tubby's Hi-Fi and Lord Kelly The Maestro. Tubby's was without a doubt the biggest and most popular sound around, but Lord Tippertone was a classic stereophonic smaller sound which was based in the area where I grew up on Princess Street; they even played soul and rhythm and blues at times. Now what happened is that there was this sound from Papine called I Roy The President and one night their dubs were stolen, so to help out, because they were short of music, I did my version of 'Satta Massagana' ('Give Praises', red.) and rocked the night!"

As the story goes, it was none other than Gregory Isaacs who discovered you performing at one of these nights.
Big Youth: "True, true! Gregory heard me chant my righteousness one night and liked what I was doing. Now at that same time a guy called Jimmy Radway aka. One Foot Jimmy wanted to record my version of 'Black Cinderella' a song originally done by Errol Dunkley. Gregory also had recorded a song by Errol Dunkley called 'Movie Star' and that gave him the idea to record a version with me called 'Movie Man'. Not much later I recorded 'Every Nigger Is A Star' with Rita Marley, Judy Mowatt and Marcia Griffiths, who would later go on to become The I-Threes. At that time The Wailers, Peter, Bunny and Bob had just split up and when Bob saw me mashing up the place with 'Every Nigger Is A Star' he decided to check out these girls himself. Of course Rita later became his wife. I've always enjoyed being a trendsetter! I can only be thankful because: "Great is the Lord and greatly is he to be praised in the mountain of his holiness and he who exalted himself shall be abased." (Matthew 23:12, And whosoever shall exalt himself shall be abased; and he that shall humble himself shall be exalted, red.). I know I've done a lot of great things, but I leave it up to the people to exalt me for it. I just keep on doing what I'm doing."

You also had a longstanding friendship and working relationship with Dennis Brown, you guys recorded several tunes together, how do you remember him?
Big Youth: "When I first met him, Dennis Brown was still this little soulful singer, but his voice always fascinated me. He did background vocals and harmonies for many of my songs, as did The Heptones and Gregory Isaacs. When I did my first tour in the UK, back in 1977, I took Dennis Brown along as my opening act. Sadly, sometimes it's the games that people play that destroy them. The thing is when you have prophetical works to do you have to live righteous and clean and watch what you eat and drink. You must not deal with certain substances, because you have people who look up to you. Dennis passed away, but luckily his spirit lives on. The same goes for Gregory Isaacs and Bob Marley."

The tune that really kick-started your career was the one with the motorcycle sound at the beginning: 'S.90 Skank', produced by Keith Hudson. I believe Honda even decided to use the song for their advertisements back then?
Big Youth: "That's kind of funny, because I really intended the song as a warning. In those days a lot of people were dying in motorcycle accidents on these bikes, so that's why I told them: "Don't ride like lightning, cause you a go crash like thunder!". The song was partly autobiographical, because when Gregory put out the 'Movie Man' 7inch, I really wanted to hear my song on the radio and they wouldn't play it! I was on my way coming back from the pressing plant with the first copies of the record when I was thrown off my bike. The accident happened somewhere around noon, but I only regained consciousness around seven o'clock that evening. It's at that moment that I got a vision from the Most High to go out there and start a career as a singer to tell the world about Rastafari. When we recorded the song we actually took a bike into the studio, and behold, it became my first number one hit! That same day I also recorded 'Chi Chi Run' which also went to number one."

That was the first tune ever recorded to feature the now renowned "chi chi" expression.
Big Youth: Well yeah, but my "chi chi" was a girl! I just went: "Chi chi run, she run she run..." and was never talking about the sexual preference of certain people! I'm not for calling people names and that whole "chi chi man" (Jamaican pejorative sexual slur used to describe gay, bisexual and effeminate men, or those presumed to be gay and bisexual, red.) business started much later."

What is Big Youth's vision on Rastafari?
Big Youth: "I established Rastafari and natty dread in the Jamaican music business! (refers to his dreads) I'm an old tree now, so there's not that many branches left anymore. (laughs) These days you've got a lot of these new wave Rasta's hanging around, calling themselves Rasta when in fact they're not really. All they are is imposters, because Rasta's live clean. Rasta is not about religion, it's a natural way of living; natural like the tree that's planted by the rivers of water. Naturalness all the way! Rasta don't touch neither ox nor swine, cause the way they're raising these animals today you're ingesting more medicine than meat. A lot of pharmaceutical products aren't working anymore because the meat of those animals is full of antibiotics."

It might surprise your fans to hear that your most successful album to date, 'Screaming Target', never earned you a penny.
Big Youth: "To this day I haven't been paid a cent of publishing rights for that album! I recorded 'Screaming Target' as a bit of a favour for Gussie Clarke who was just starting out in the business at that time. Unfortunately I've never quite been up to speed with the paper side of the business. I was just a guy making music, while at the same time people around me were ripping me off all the time! Apart from the cover versions of existing songs I did, I wrote all of my songs myself, and still those big companies like Trojan ran away with all of my money! God bless Richard Branson, though, because he's the only one who ever paid me for my work (Big Youth recorded the album 'Isaiah First Prophet Of Old' for the Virgin Records sub-label Frontline in 1978, red.). But it's not money that makes me happy to be honest; I just enjoy performing for the people like here tonight at Reggae Geel. A crowd like that can really make me feel joyful like a young boy again. I just want to be on the road to tell the people about Rastafari and share my joy! And of course I'm now also grooming my sons, because apart from Tafari, who was here with me tonight, I still have another son called Isaac, who I definitely want to bring along next time. I also want to put my band The Ark Angels back together, because my fans really have to see me perform in full form! To me, music is no religion, because religion brings division, but music is natural mystic; it's existed from ever since. I've been listening to music all my life ever since the days of Elvis Presley, but I'm still running around like a little kid on stage. Big Youth comes, sees and conquers!"