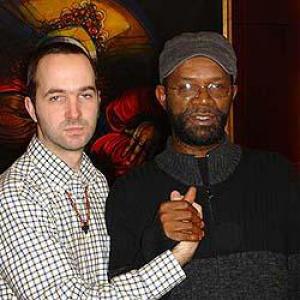 Beres, your first taste of fame came when you joined a group called Zap Pow. How did you get involved in that band?
Beres Hammond: "I was just coming out of the amateur talent show circuit. There was a series of that kind of shows called the Merritone Amateur Talent Show. After my first initiation, we did a couple of shows in and around the clubs of Kingston. Different bands used to back us and Zap Pow was one of them. After one of the shows with Zap Pow, they came to me and told me the band would do well with a voice like mine because at that time they didn't have a lead vocal. For me this looked like the perfect springboard to launch my career, so I joined them in December of 1975 and then the saga began."

Mikey Zappow passed away just recently. How do you remember him?
Beres Hammond: "He was one of my motivators when I was in the group, a guy that never got angry. I hung around with him a lot and he was an inspiration to me in the sense that he was an optimist and always told me: "You can do it!" I remember him for all that beauty!"

You're known for your personal style blending reggae and lovers rock with soul and more recently even hip hop.  When you started, who would you say were your influences? What did you listen to?
Beres Hammond: "There wasn't much of a choice because back in those days we only had two radio stations on the island. As it was still the "Queen's Country" then, the deejays of that time played mostly foreign music, American rhythm & blues and quite a bit of music from the United Kingdom. Because of that situation I got a chance to listen to people like Sam Cooke, Marvin Gaye, Otis Redding, you name it, and from the UK Tom Jones, Dusty Springfield, Engelbert Humperdinck, that kind of people. I grew up on that music so it was hard for me to escape that influence. Looking back on it now though, I'm happy I got to know the music of all these artists."

Somewhere in the mid-eighties you became the victim of a brutal robbery and subsequently moved to the United States.
Beres Hammond: "(laughs) Well, it wasn't necessarily a brutal one, but it was a robbery yes. I never lived in the US; I just stayed away from Jamaica for a while. I was in and out of the US for about 3 to 5 years, but after a while you start to realise you have to return to what you know best. What I knew best was being in the studio making songs, so in 1990 I decided to go back to Jamaica. I was looking for as much studio time as I could get and one of the places I went to was Penthouse. Donovan Germain made me a deal. I agreed to sing over some of the riddims he provided me with and in return I got studio time to do my own thing. You have to realise that at that time still there were far fewer studios in Jamaica than there are now, so studio time was hard to get. I ended up singing 'Tempted To Touch' of course and that kind of re-launched my career. After that a series of chart toppers followed and I was approached by numerous record companies. There was one guy, called Dante Ross, who was affiliated with Elektra Records. I really liked the way he approached me, so I signed an agreement with them. Sadly, because they started merging with other labels, only one album, called 'In Control', ever came out of that collaboration."

That must have been just before you had your own studio then?
Beres Hammond: "Yeah correct."

It's well-known - even outside of Jamaica - that musicians are almost lining up at your studio to be able to play and record there. What's the secret?
Beres Hammond: "(laughs) Well first of all, I don't know if they are really lining up, but I do know that it has a beautiful warm sound and our atmosphere is very friendly. Yeah, people love playing there, it's true. I keep true to my analogue recording to; that is a fact. It would be nice if you could come over there one time to visit me and hear and feel it for yourself."

A name that is heard and shouted out a lot in Jamaica these days is that of Jah Cure, who's still imprisoned for the time being. You produced his second album ('Ghetto Life', red.), so you must have had a certain feel for the lad. How did you get to know him and what made you decide to produce that album with him?
Beres Hammond: "I got to know him when he was about 17 years old. It was he who came to me. Well actually it was Sizzla who introduced him to me and said: "Nice little youth this! Him sound wicked father B. I want you fi deal with him for me, because him don't get no justice out deh so! I want you fi take him under your wing.". So from that time he was with me until the time he ended up in that prison situation. He still toured Europe with me you know. I brought him over here to Belgium in 1998 I believe. I still love and appreciate him dearly. Coming back to that album we did; one of my gifts is my ability to deal with youths that have talent but lack guidance or assistance and Jah Cure fit that description."

Another name I can't leave out talking about is that of Lady Marcia Griffiths. Your collaborations are now almost legendary. How did you meet up?
Beres Hammond: "You know, I can't even recall how we met! It's just something that had to happen I suppose. What I do know is that over all these years we have had an enormous respect for one another and musically there is a mutual understanding too. I always look forward to working with Marcia. The past 5 year we did all the US tours together."

That's something we're still waiting for here in Europe.
Beres Hammond: "(laughs) Yeah, I know. Actually about 2 or 3 years ago we were supposed to do a tour like that here in Europe but at the last moment things didn't go as planned. I would still like to do that though... Man that would be something!"

Something you talk very little about is your spiritual or religious beliefs. What's the reason for that?
Beres Hammond: "Nothing in the world splits people up like religion and politics. You and I might be the best of friends until I find out what your religion is. As soon as I know what your religion is and you know what mine is, a line has been drawn. It can be a broad line or a thin one, but it will always be there keeping us at a distance from one another. It should not be like that. Because of those personal beliefs we are not what we are supposed to be, so usually I don't speak about it. I just try to be nice with all the people I meet and try to see the goodness in them. I survive on their beauty! Politics and religion don't allow that. On top of that I believe certain things are private. If you have seen me behave in a certain way and you think: "Hey, Beres is a Christian!" that's ok, but I'm not going to promote or advertise my religion. It's too sacred to do that. My religion is the one of love, one also that sees through race and colour. I see the fulfilment of that in music, so I preach music!"

To end this interview I want to give you some words and names and you can just tell me what they mean to you. Let's start off with your home country: Jamaica?
Beres Hammond: "I would never live anywhere else! That's what I hope anyway. For me it's paradise. After having travelled a good part of this globe, I realise that Jamaica is truly a special place."

The biggest part of your life then: music?
Beres Hammond: "I've never really thought about it. I grew up with music, but I wouldn't know how to begin putting music into perspective."

As a last one then: the future?
Beres Hammond: "I'm glad I have a future. I never discuss it. I take each day as it comes and I hope that the Father will always fill me with sweet melodies and the right words to come from my mouth. That's all I hope for."