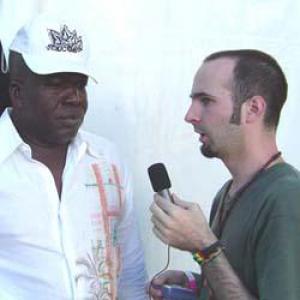 Barrington, big up! A bit sad about that ending here tonight, but that's just Holland, they watch their clocks and cut you off. I hope you aren't too upset about the whole thing?
Barrington Levy: "Of course I feel bad! Why do they invite me here, to insult me? That's not nice! I thought the promoter would be interested to see a crowd that was glad to see an artist. If that doesn't seem to matter and it's all about making money that is bad news. I wish they could hear this! I've come from too far for them to just cut me off like that, but I won't make any problems, I just walked off. I know God is not sleeping!"

Let's go right back in time then. Has music always been a top priority in your life or was there a period when you were considering taking another path in life?
Barrington Levy: "There was a time when I was thinking of taking another road, yes, but the right side of myself wouldn't let me. When you're in the business and you aren't getting any support that is rough and discouraging."

Your career really took a flight when you started working with Henry 'Junjo' Lawes and later on with Jah Screw. How do you look back on these two producers?
Barrington Levy: "I wish I hadn't been involved with Junjo, but working with Jah Screw was and is still fun. Working with Junjo was a disaster in one sense. Junjo thought he helped me but in reality no one helped me. I helped myself because I'm the one who went out there and did it! (Junjo Lawes reportedly sold out Barrington Levy by signing his name to Barrington's songs and selling off the credits, red.)"

When you were writing hits like 'Under Mi Sensi' or 'Broader Than Broadway', did you know right off that they were going to be big?
Barrington Levy: "Nobody can tell me that they know something is going to be a hit. Saying that would be lying. It's the fans, the people who make a record a hit. I can tell you that I enjoyed writing them, that is true. I had a feeling inside of me that the people would love these songs, but I never really knew."

VP Records have two new releases on the market called 'Sleng Teng Resurrection' and '1985 Sleng Teng Extravaganza'. The popularity of that Wayne Smith tune keeps growing, while little or no respect is shown to the original, 'Under Mi Sensi'. What are your feelings towards that?
Barrington Levy: "I feel blessed. It's just that King Jammy should be man enough to admit he came to England, saw that 'Under Mi Sensi' was mashing up the place and took it back to Jamaica. I would be feeling better then. Jammy is acting like he originated the whole tune, but 'Under Mi Sensi' is 'Under Me Sleng Teng', the melody and the words! That's it!"

I want to go back to something you mentioned on stage earlier. You talked about the importance of a healthy lifestyle. Do you take care of that yourself, in the things you eat for example?
Barrington Levy: "No one is perfect, but you can try your best. Real healthy food is scarce especially in these parts of the world. Everything is treated with fertilizers, pesticides and insecticides. You don't have a lot of choice because if you don't use chemicals, insects are going to eat your crops. I'm just saying be aware! Try your best to live healthy."

I read that you don't really like talking about the past, so let's look towards the future then. Can we expect some new Barrington Levy material any time soon?
Barrington Levy: "Yes! The future definitely holds a lot for Barrington Levy. You can look forward to a new album, after 11 years, called 'It's About Time'."

An appropriate title!
Barrington Levy: "Yes! So look forward to that!"

Barrington, thanks again, it was really a pleasure to see you here on stage today!
Barrington Levy: "Thanks man!"