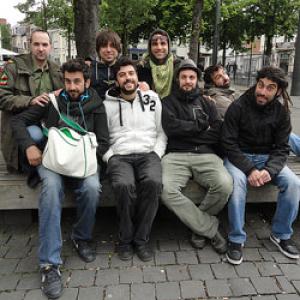 Baciamolemani is a Sicilian term that describes the way respected members of the mafia were traditionally greeted. Why did you choose that as a band name?
Enrico Giurdanella (guitar, banjo, ukulele): "As you just said, it was the traditional way of greeting someone from the mafia; translated it means something like: "Let's kiss hands!", but by adopting that as the name for our band we wanted to break the stereotypes that still exist about Sicily. Sicily is still often just regarded as the birth place of the mafia and linked with crime, but in reality it's much more than that."

When you guys started Baciamolemani, it was still much more a ska and reggae inspired band. When did your music start developing into what it is today?
Piero Pizzo (vocals): "We've never been a band that likes to stick to a certain formula and the more we travel the more we incorporate new influences in our music."
Enrico Giurdanella: "We love to travel and one trip in particular that has been very influential was when we travelled to Spain in 2008. It was at that point that we started experimenting with genres like rumba and cumbia. What happened is we were playing a small gig at a local Sicilian bar on night and, to be honest, that concert was a complete flop; I think we played for a crowd of maximum fifty people that night, but in that small group of people there was Guillem Gabernet, who liked what he heard and invited us to come and play at the Casal de Joves de la Guineueta in Barcelona (Catalan version of a youth center, red.). Once we got there, we met some of the musicians of La Pegatina and we immediately clicked; so much so even that when we started working on 'L'Albero Delle Seppie' we absolutely wanted to do something with them and from that collaboration came 'La Corriera'."

The fact you've collaborated with La Pegatina and that 'L'Albero Delle Seppie' was released on Kasba Music, puts Baciamolemani in the corner of the musica mestiza scene.
Piero Pizzo: "I think the album defines a period in the existence of the band. As I already said, our music keeps evolving; there are some elements that are typically Sicilian that we'll always keep as a base, but apart from that the sky is the limit. Our next album might sound completely different, so I would definitely not want to be pinned down on that mestizo sound."

What does the title of the 'L'Albero Delle Seppie' album refer to?
Enrico Giurdanella: "That was an idea of our art designer (Andrea Calabresa, red.). He suggested the image. The "seppie" or cuttlefish is a sea animal that you can find in abundance in the Mediterranean Sea and that is caught for consumption (Cuttlefish are especially popular in Italy, where they are used in risotto al nero di sepia, literally rice with the black of the cuttlefish, red.). As islanders the sea is ever present for us, as it is everywhere you look, but by putting cuttlefish on a tree, like real fruit, the image becomes surreal. Our music is rooted in Sicilian tradition, but we've added our own ingredients and created something totally new, so the image of the tree full of cuttlefish fitted that image perfectly."

Is Baciamolemani just a party band or is the content of your songs also important?
Enrico Giurdanella: "The content of our songs is definitely important, but because most of our songs are in Italian or Sicilian dialect, we try to make our songs come to life on stage where we create our own imaginary universe. Our shows are very visual and theatrical and we like to put a lot of irony in our songs. The fact we also create a party vibe is just a logical consequence of the sort of music we play."

Am I right in saying 'Vicoli' holds a somewhat symbolic meaning in the track list of 'L'Albero Delle Seppie'?
Enrico Giurdanella: "It's the song that showed us the musical path we are now on and that made us discover our own musical identity, so in that aspect it is kind of symbolic yes."
Piero Pizzo: "'Vicoli', meaning "alleys", also showed us you can also write songs about the little things that surround us in life, but if you put all these little stories together you can create a beautiful blossoming tree like the 'Albero Delle Seppie'."

'Renato' is a song with a distinct Roaring Twenties feel. What does the Renato character in the song represent?
Enrico Giurdanella: "It's a song about the mafia. Renato is a barman who flees Napels, in the south of Italy, and relocates to Saint-Tropez in the south of France, trying to escape from the grip of the mafia. In Italy the mafia will control certain parts of the cities, asking the local merchants for "pizzo" or protection money. By relocating to Saint-Tropez, Renato hopes to escape this extortion system only to find himself in very similar circumstances. With the song I wanted to illustrate it's always better to face your problems head on, rather than to run away from them."

'Sbarco A Ellis Island' talks of the immigration by many Italians to the United States.
Andrea 'Forestiero' Savasta (trumpet): "Migration is something that is almost in the blood of Italians. If you look at the world today, Italians are everywhere - there's a big Italian community here in Belgium for example - and by describing the situation at the beginning of the previous century, when whole families left everything behind hoping for a better existence in a new world, we wanted to state we shouldn't judge people doing the same today. Apart from that, it's also a utopic view of a new world built on a cultural melting pot of people from different nationalities, cultural backgrounds and religious beliefs."

'Abbampa Lu Suli' is one of the songs on 'L'Arbelo Delle Seppie', where you guys sing in Sicilian. What does that title mean?
Piero Pizzo: "Literally it means: "The sun is shining.", but in fact the song talks about the differences between north and south Italy. It talks about a northern politician, who in the winter says nothing but bad things about the people in the south, but in summer likes to go there for his holiday."

What's the difference between being Italian or Sicilian?
Piero Pizzo: "Italy is a country of about fifty million inhabitants and although in theory we form one nation, in reality that isn't always the case. I've always seen myself as being Sicilian first and Italian after. To me Sicily represents the heart of Italian culture; it was subsequently colonized by the Greek, the Arabs and the Spanish and all these cultures left their mark (After the fall of the Roman Empire in the 5th century AD, Sicily often changed hands, and during the early Middle Ages it was ruled in turn by the Vandals, Ostrogoths, Byzantines, Arabs and Normans. Later on, the Kingdom of Sicily lasted between 1130 and 1816, first subordinated to the crowns of Aragon, Spain, the Holy Roman Empire, and finally unified under the Bourbons with Naples, as the Kingdom of the Two Sicilies. With the Expedition of the Thousand, a Giuseppe Garibaldi-led revolt during the Italian Unification process, it became part of Italy in 1860 as a result of a plebiscite. After the birth of the Italian Republic in 1946, Sicily was given special status as an autonomous region, red.). Even though the island has lost most of its feathers over the past century, I'm still proud to be Sicilian!"