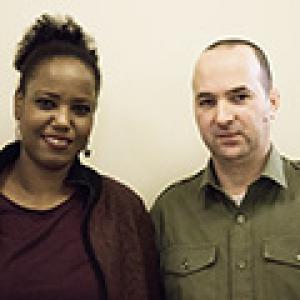 Isn't it weird never to have set foot in your own country?
Aziza Brahim: "It's true I don't know my own country, but I hope that one day I'll be able to settle there. It's something I've been dreaming of ever since I was a little girl, but I have to admit that now I'm getting on in life, I'm starting to doubt wither my wish will ever become a reality. In any case, I refuse to give up hope!"

Are there practical grounds preventing you Sahraouians from returning or is it merely a moral issue?
Aziza Brahim: "Being Sahraouian, I only want to return to my country as a free and fully-fledged citizen. The Moroccan government still treats us as second class citizens. We aren't Moroccan and never will be, as we differ culturally, historically and linguistically. Sahraouians sans Moroccans don't even look alike. On a practical level, the Moroccan government has raised a 2700 kilometer long earthen wall, separating the western part of the country from the eastern part which is controlled by Polisario forces (Frente Popular de Liberación de Saguía el Hamra y Río de Oro or Popular Front for the Liberation of Saguia el-Hamra and Río de Oro, red.). If you want to visit that eastern part, you now have to make a huge detour via Mauretania!"

You address the issue of the Moroccan sand wall and other walls being built in quick succession in 'Los Muros', a track on your most recent album 'Across The Hamada'.
Aziza Brahim: "The fall of the Berlin Wall was a bit of a mixed signal, as it seemed to symbolize the end of all other walls and borders in the rest of the world as well. Nothing could be further from the truth: there's Trump planning to build a wall between Mexico and the US, there's the wall the Israelis built between Israel and Palestine, the fence shielding the Spanish enclaves Ceuta and Melilla from Morocco, and new ones are being erected all the time. To me, Europe always represented freedom and respect for human rights, but watching the way various countries are trying to keep out refugees by putting up barbed wire fences and leaving these people to their own devices, I can't but feel ashamed. It also makes me frightened for the future. Of course we have to keep hoping for a better tomorrow, because without hope all is lost, but I would be lying if I said these evolutions haven't darkened my world view. In the song I don't just talk about actual walls, but also about metaphorical ones like discrimination, racism or sexism, all strangely enough still remaining intact in western society. It's about time we try to breach these walls so we can start to evolve towards a better, more equal society. The more distance is created, wither it be literal or figuratively, the more chance for new conflicts to erupt. The conflict in Western Sahara and the faith of the Sahraouian people illustrates refugee issues can go unsolved for long times as geopolitical conflicts often linger on for decades. Capitalism has gotten an ever increasing grip on human existence, reducing a person to a mere number and always putting economic interests before humanitarian ones; human suffering has simply become a byproduct!"

What can you tell us about the title of the album, 'Across The Hamada'?
Aziza Brahim: "La hamada del Draa is the inhospitable dessert that's been serving as a place of exile for the Sahraouian people for more than four decades now. It's an area with little or no vegetation, making survival quite hard. I chose it as the title of the album, bec ause I wanted to illustrate the hardship and struggle of Sahraouian life. The hamada is also symbolic, as one day we'll have to cross this dessert when we finally make our way back home."

You stem from a musical family - your mother sang in a band and your grandmother was a well-known poet - when did music become more than just a pastime for you?
Aziza Brahim: "My grandmother, who was an important poet in Sahraouian culture, was a big source of inspiration and already pushed me into reciting her poems when I was still a little girl. But I really only started contemplating a career in music when I started studying in Cuba."

The absolute diva of Sahraouian music was Mariem Hassan. In Sahraouian culture is music women's business?
Aziza Brahim: "Sahraouian women tend to be spirited and independent minded and participate in all aspects of daily life. It's true they've also become the face and voice of Sahraouian music, but that doesn't mean Sahraouian men don't bother with it. We do have a percussion instrument, the tbal, which I also play myself, that is exclusively reserved for women."

At a certain point you decided to leave Algeria to move to Spain.
Aziza Brahim: "What happened is I was offered a recording deal by Nubenegra, a Spanish label, so moving there was a logical step. In Spain I found myself surrounded by Sahraouian artists like Mariem Hassan, Shahid El Uali and Leyoad, immediately making me feel at home. Apart from that, Europe offered much more possibilities to establish a career in music then life in an Algerian refugee camp ever could. You should also remember that until 1975 the Sahraouian people were Spanish subjects (Spanish Sahara or officially the Overseas Province of the Spanish Sahara, was the name used for the modern territory of Western Sahara when it was occupied and ruled as a territory by Spain between 1884 and 1975. Spain gave up its Saharan possession following Moroccan demands and international pressure, mainly from United Nations resolutions regarding decolonization, red.), so we already had some affinity with the country."

As you mentioned, the Sahraouian people have been fighting for their independence for more than four decades now. These days you're based in Barcelona, the capital of Catalonia, a Spanish region that's also striving for independence. What's your view on the Catalan desire for indepence?
Aziza Brahim: "Difficult, but excellent question… (laughs) Almost all the musicians I work with are Catalan, and some of my children were also born there. It's my firm belief that a people speaking its own language and having its own cultural identity deserves recognition."

In 2011 you played a role in 'Wilaya', a movie by Pedro Pérez Rosado about the fortunes of a Sahraouian family; an experience worth repeating?
Aziza Brahim: "Of course I'm no actress nor did I ever have that ambition, and I'd never sacrifice my music for a career in the movies. What happened is that I was first asked to do the soundtrack for 'Wilaya' and was subsequently offered a part in the film. I saw it as a challenge and even though it took some getting used to being in front of a camera, I have to admit I enjoyed the experience."

In the West we often consider the Sahraouians to be a dessert people, but in reality the sea plays an almost equally important role in Sahraouian culture.
Aziza Brahim: "The Sahrawi Arab Democratic Republic is a small but very resource-rich country. Of course part of the country is dessert, but that's also where large deposits of phosphates, gas and petroleum can be found. In turn, the coastal areas harbor some of the richest fishing grounds in the Atlantic. For the Sahraouian people the sea also symbolizes freedom."

In conclusion, do you see yourself as a protest singer or is there more to your music?
Aziza Brahim: "I consider myself both a singer and an activist; first and foremost of course in addressing the plight of my people, but also in the struggle for women's rights. I could never completely separate my music from these issues, but at the same time I'm also glad it also allows me to express other sides of my personality."