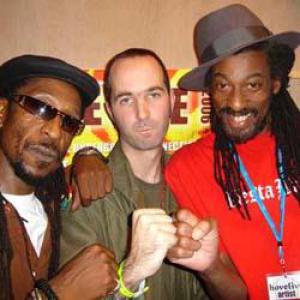 Thirty years in the business! If I just tell you that, what goes through your head?
Drummy Zeb: "(laughs) It makes me feel very old! But inside I feel very young. When we play a live show like this, in front of a real audience that loves our music, it makes it all worth it. If I had the choice I would do it for another 50 years!"
Tony Gad: "(laughs) Yeah well, sometimes when we hear ‘thirty years', we almost can't believe it ourselves. We still love what we do, so when I think about those thirty years, I don't see it as thirty years, I just see it as the time that we have enjoyed playing reggae music so far. I grew up listening to artists like Bob Marley, Burning Spear and Dennis Brown and they became the inspiration for us to start a group. You know, in the early days they said reggae music couldn't be made in England and today you can see that there's reggae music from around the globe. Like right now for example, we're sitting in Belgium and back then you wouldn't have expected to find people in Belgium who liked reggae, but right now the music has spread worldwide and we are very thankful for that."

How did the three of you get together back in the seventies? How was Aswad actually formed? Were you guys youth friends?
Drummy Zeb: "No, Tony ('Gad' Robinson, red.) and Brinsley ('Dan' Forde) knew each other from school in Neasden (north London, red.), but I lived in Ladbroke Grove (west London, red.). Now one of my friends saw an advert in a record shop from this band that was looking for a drummer. So I went there to do an audition and at first they said they didn't want me, but two weeks later they came and found me after all. That's how it happened."

The era of the seventies, when Aswad was formed, was also the period that the National Front roared its head in the United Kingdom. Was forming an English roots reggae band meant as a reaction to that?
Tony Gad: "No, it wasn't really a reaction against the racism that was going around but more us hearing someone ventilating an opinion and deciding we had something to say too. As you know, reggae music came out of Jamaica and it told a Jamaican story, but we, as black youths growing up in England, had a story to tell too but we still grew up listening to reggae music, so this was just the story from our side. It wasn't so much about racism than it was about life and that encompassed racism and a lot of negative things that came with it. We were there to talk about things that were positive though, as a positive reaction so to speak. Music is a thing that can bring people together and that's what we enjoy doing."

The last tune you did here tonight was 'Don't Turn Around'. That tune went so far, even all the way to number one in the pop charts, but when you first came out with it did you expect it to kick off like it did?
Drummy Zeb: "Well to be honest, the first time I heard it, I didn't even like it. That being said, I didn't like 'Shine' (another big Aswad hit, red.) either. It just works out like that sometimes. You have to do things you believe in, but sometimes when you don't believe in something, someone else will and things will still happen."
Tony Gad: "Before 'Don't Turn Around' became a hit we'd already been playing the circuit for about 14 or 15 years, so we kind of had a fan base but it was more of an underground thing. Some people knew of us, but the general public had no idea. We didn't set out recording 'Don't Turn Around' for it to become a universal number one hit, it just kind of happened at the right time. We're sometimes asked if we set out to cross over into other genres of music, but we don't really, we just make music and sometimes that's dub, sometimes its lovers rock and other times it's a conscious tune with a message. 'Don't Turn Around' just expressed how we felt at that particular moment in time. What it actually did, by becoming such a smash hit, is broaden our audience immensely. It allowed us to go overseas, to America, to Europe and so on. That can only be a good thing, because when one band hits it brings all the other bands that play the same kind of music with it. When Bob (Marley, red.) came out and became known all over the world, the same thing happened. He was more than a reggae star though; he was an artist in his own right. Sometimes people try to categorise music too much and that's why we like to record tunes like 'Best Of My Love', which was originally a tune by The Eagles. It's to show that reggae is much more than two chords music, we can even go classical if we want to and still keep it reggae. Reggae music should be respected just like any other form of music. It fills stadiums just as well and 'Don't Turn Around' becoming a number one proved that."

A great dub tune that you guys did, 'Warrior Charge', was recently used again by a number of artists. Is that a form of respect that you can enjoy?
Tony Gad: "(laughs) For us, as a group of people that grew up in England, hearing Jamaican artists cover or use our material is a great feeling, because for us Jamaica has the roots and we are just the branches. We've done tunes, like 'Love Fire' and 'Warrior Charge' that were covered by lots of people and it just shows that we all take inspiration from one another.  As I said earlier, the music is a worldwide thing now. Even in hip-hop right now or when you listen to drum & bass or garage music, they all have a little reggae influence somewhere. It's just one big melting pot of music, opinions and vibes and that can only be good."

'Warrior Charge' of course also got a big push by being featured in the movie "Babylon", which starred Brinsley Forde (ex lead vocal of Aswad, red.) in a leading role. That movie is hard to find these days. A lot of "classic" reggae movies have been re-released on DVD, but "Babylon" can only be found in a bootleg version. Any idea why that is (the movie was finally rereleased on DVD in 2007 on the Italian label Raro Video, red.)?
Tony Gad: "Well, basically, when the film was made, it was produced by a small independent company, so I guess it's the same thing that happens a lot of times with reggae music, it had problems getting out there, getting distributed. A lot of people still know about the movie, but there are not a lot of places where you can actually find it. If I would find it today, I would even watch it again, because it's been years for me too. Maybe if you found the geezer that originally made it (Franco Rosso, red.), you could convince him to bring it out again so it could reach more people. Today "Babylon" is like one of these Studio 1 singles; very hard to find, but when you can lay your hands on a copy, it's like gold dust in your hands!"

At one stage, you guys made one of the biggest fashion statements ever made in reggae, with the suits and the hats. Who came up with that idea?
Tony Gad: "(laughs) Well, for us it wasn't a fashion statement as such, it was just how we felt at that point in our career. We all have different moods sometimes; sometimes you feel militant, other times you just feel like sitting down with your woman and for us, on 'Don't Turn Around' we felt like trying these suits. Not as a fashion statement, but just to say: "Hey, we can pull this of too!", because sometimes people's conception about what Rastafarians or dreadlocks are about is just wrong. It's just a positive vibe and we belong to the human race just like everybody else on this planet. If we feel like wearing a suit, a tie and maybe even a white shirt, then why not? (laughs)"

I want to end this interview with a spiritual question. You guys all still go by your tribe names as given by the Twelve Tribes of Israel, so after 30 years, how important is Rastafari still for Aswad?
Drummy Zeb: "Rastafari is the fundamental reason why we are still together. Rastafari started in Jamaica but went around the world. There's so much rubbish going on in the world right now - all these things with terrorists and stuff - but Rasta don't deal with that. And that is one of the main reasons we are still together: we love everybody! That is what the Twelve Tribes are about too; everybody is equal and everybody has love within them."
Tony Gad: "Rastafari is not just important to us, but it's something that's important to the entire human race! It's not something far out for us, we just try to spread a message of peace and love. When you look at the world today, there are just a lot of negative things going on. Music has always brought people together though. We've been to places as far off as Japan and watched Japanese people dance and vibe to reggae music. That's why we do it. Basically our message comes down to: "Let's all just try and get along as one human race!" There's only one human race and only one world, so all we can do as musicians is spread that vibe and let the positive rather than the negative prosper!"