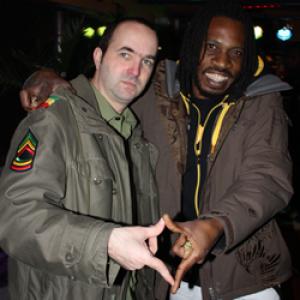 Anthony, like so many Jamaican artists before you, you started your singing career as a member of a gospel choir (Missionary Band, red.). Tell us a bit more about your first steps in the music business.
Anthony Que: "Well, that was really at Youthman Promotion for Sugar Minott. I was still at school at the time, but whenever I had some free time I used to hang out there hoping for a chance to record. It was around the same time I joined the Missionary Band, a local gospel band that had some success in Jamaica."

As you just mentioned, you were one of the many youths who benefited from Sugar Minott's Youthman Promotion program. In your opinion, will Sugar's passing have an impact on the continuation of that program?
Anthony Que: "The fact that he's no longer there will definitely impact Youth Promotions, but I know for a fact some of his children, his daughter Passion (aka. Pashon) and his son Daniel, to name just two, have taken over where he left off and continue his legacy, a bit like Bob's kids did with the Marley-legacy. Sugar was a very loving, compassionate and spiritual person and following in his footsteps won't be easy."

Apart from working with Sugar Minott , you also learned the ropes from Beres Hammond. What was the big difference between the two of them?
Anthony Que: "Beres just has a different, more soulful way of singing than Sugar did. He mainly taught me how to reach the high notes! (laughs) If you weren't up to scratch, Beres would be your worst critic. At that time people like Jah Cure, Jah Mason and Sizzla were also hanging around there, so it was a very inspiring place to learn."

With Sugar and Beres teaching you the ropes, the foundations for your music career were already assured, but for some reason you still decided to move to London at one point.
Anthony Que: "That happened after I did a tour in Germany with Daweh Congo. I still hadn't recorded an album and saw there were some opportunities in Europe. Eventually I returned to London where I met up with people like Earl Sixteen and Errol Dunkley and recorded my first two albums ('A Brighter Day Is Coming', 2003 and 'Recharge And Reload', 2005). I ended up staying for five years. With 'Recharge And Reload', Jet Star had launched me into lovers rock and after a while I felt like writing some deeper music again and rediscover the roots side of my music, so I moved back to Jamaica and released 'Jamaica No Problem' (Corner Shop, Nocturne, 2007)."

Why exactly did you choose that title? Everyone knows Jamaica has its pick of problems?
Anthony Que: "If you listen to the song, you will hear it goes: "Jamaica no problem, but a who really solve them?", so I chose that title because "Jamaica No Problem" is still a slogan that is often used, when, as you said, everyone knows there are enough problems in Jamaica. It was my sarcastic take on things. For that album I linked up with my cousin Gyptian and most of the rhythm tracks were done by the Firehouse band, so it was a nice project and I was really happy with the result."

Just recently you released the 'Meditation Time' album, which is undoubtedly your most spiritual and roots sounding album thus far.
Anthony Que: "Yeah, absolutely! The past few years I've tried my best to convince producers in Jamaica to return to a deeper, more roots sounding reggae music. Roots music is slowly dying out in Jamaica and if we want to keep it alive it's up to the younger generation to do so. I know some people might know me for the lovers rock songs I've done in the past, but with 'Meditation Time' I really wanted to get back to basics and talk about things like righteousness and consciousness as I feel the world is in need of these values right now."

Your newest release is the 'No Fear No Man' album released by the Catalonia based label Reggaeland Records. How did you hook up with these guys?
Anthony Que: "I met Marcus (Sanchez, red.) when he was in Jamaica to record some other artists. I got introduced to him by Ginjah, who asked if I would be interested to record a tune for Reggaeland. When I met Marcus there was an immediate chemistry between us; somehow he has a very Jamaican vibe about him. We started off doing a few songs, but I felt we should keep at it and make it into a full album."

August 6th of this year Jamaica celebrated the 50th anniversary of its independence. How did you spend that day?
Anthony Que: "I spent the day hanging out with my family on the beach. At night the government had put together a big stage show in Montego Bay, so we went there and saw a whole host of artists perform and I even ended up doing one song myself. Big celebration and good vibes man! Together with the Olympics in London where the Jamaican athletes performed so well, it was an overwhelming experience with black, gold and green everywhere."

How did you come by your stage name Anthony Que?
Anthony Que: "My real name is Terrence Anthony Matthie, but I'm someone who likes to strive for quality in everything I do, so Que stands for quality. It's something that started in high school where everyone already called me 'Q'."